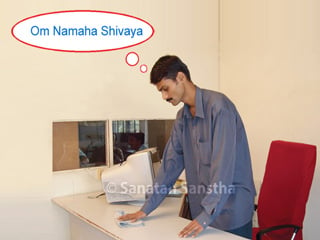 This article elaborates importance of Karma according to Karma-yoga. Karma-yoga teaches us how not to develop sanskars while performing karma and how to get liberated from bondage of sanskars. It also teaches which karma is appropriate and how to perform it.

A. Importance of performing karma

B. Reasons for performing wrong karma

C. Causes of certain diseases & their remedies according to Karma-yoga

Common diseases are caused because of imbalanced diet and improper lifestyle. Some diseases are a result of demerits from previous births. In such cases, doctors are unable to establish the cause-effect relationship. Mostly, such diseases are incurable.

Meaning : Sins committed in previous births haunt in the form of diseases in this birth. For such diseases, along with appropriate medication, perform religious rituals such as Shantipatha, give in charity, chant the Name of God, perform hom, perform puja (Ritualistic worship), etc.

2. Importance of Karma-yoga in the context of vyashti sadhana

A. Karma-yoga teaches how karma performed by us can beneficially lead towards self-realisation

It is impossible to remain without doing anything, because even sitting idle amounts to a karma of sitting and the sanskar of ‘sitting idle doing nothing’ gets reinforced on the chitta of the individual. In reality, every individual knowingly or unknowingly keeps performing some or the other karma constantly, for example, unintentional killing of insects, ants, worms, etc., which get crushed under the feet while walking; killing of micro-organisms during inhalation. This means that, karma will continue and so will development of the related sanskars on the subconscious mind. Despite this, Karma-yoga teaches us how not to develop sanskars while performing karma and how to get liberated from bondage of sanskars. It also teaches which karma is appropriate and how to perform it. In short, even if the soul performs no karma, yet man cannot remain without performing karma. Karma-yoga therefore teaches us how to direct karma performed by us towards self-realisation.

Meaning : Endowed with this equanimity of mind, one frees oneself in this life, alike from vice and virtue. Devote thyself, therefore to this Yoga. Yoga is the very dexterity of work.

Explanation : Perform every karma with expertise, being attentive and skilful. Being skilful implies performing karma in a way that it does not entrap the doer in the bondage of karma.

C. Following Karma-yoga is essential to be able to sacrifice the desires

Sacrifice of desires is the end result. Following Karma-yoga is essential for sacrifice of desires. Once desires are sacrificed, all karmas automatically wither. Only he who renounces all desires can go on to become a karma-sanyasi. When desires have been renounced in entirety, performing karma or not amounts to the same. If a man is extroverted, then he will accomplish renouncing of the desires through nishkam-karma (Without expectations); but he will continue to perform karma. If the attitude continues to remain extroverted even in renouncing of desires, karma will continue to take place. On the other hand, if the attitude is introverted, then karmas begin to wither automatically at the instant of renouncing of desires. Man does not have to renounce karmas, they are renounced automatically, meaning, karmas take his leave all by themselves (A seeker should try to go from being an extrovert to an introvert).

Diverting the flow of the Raja component away from family life and connecting it with God by bringing about a change in attitude, is the prime objective of nishkam-karma. Since sacrifice of fruit (Consequence) of karma is connected with God, the flow of Raja component diverted to God automatically transforms into Sattva component. Renouncing naturally leads to awareness of the Sattva component and subsequently by gaining knowledge, renouncing doership and duty also becomes possible.

Following Karma-yoga breaks all ties and liberates from all sorrows.

F. Through Karma-yoga, one attains the Paramatma (Supreme Soul) and Paramanand

3. Importance of Karma-yoga in the context of samashti sadhana

A. Setting ideals for society

Shrikrushna’s life is an ideal example of the types of karmas and how they should be performed. It is essential to set correct ideals before society by one’s own achievements, for the biographies of such icons inspires several future generations. These biographies then go on to become the support of Dharma. This can easily be comprehended from the examples of Shriram and Shrikrushna.

B. Increase in samashti merit makes the Nation righteous and prosperous

Karma-yoga has greater importance to the universe, meaning, it is a cause for increasing samashti merit. As a result, along with increase of faith in the Guru, dedication unto the Nation also increases; that leads to the Nation becoming righteous and prosperous. Hence, Karma-yoga is superior.