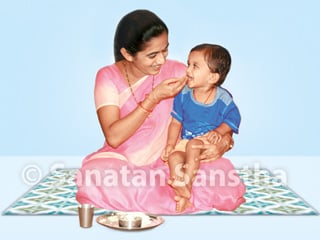 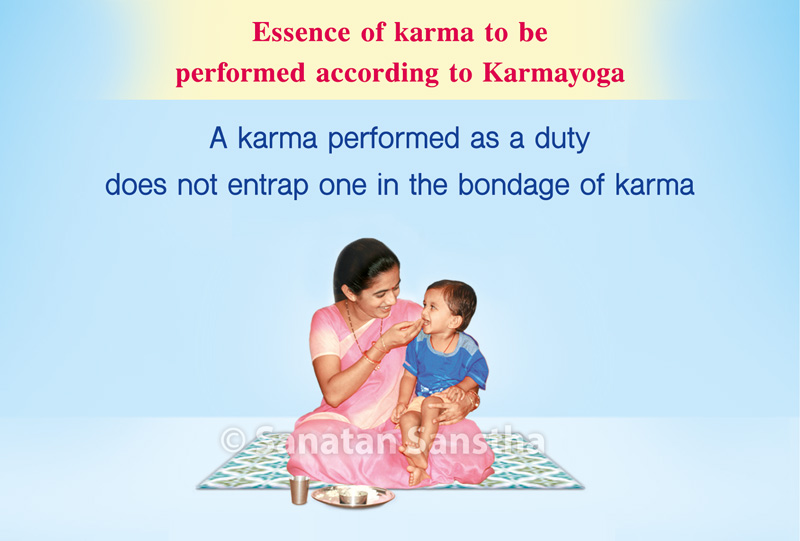 This article explains how does karma work and importance of performing karma, as advised by scriptures or Saints, without expectations and maintaining equanimity about outcome of the karma.

1. Karma is associated with the physical body

Once karma begins, its ﬂow continues uninterrupted till Moksha is attained .Even when the day of Deity Brahma ends and the Dissolution of the Universe takes place, karma survives in the seed form and with re-Creation of the Universe the same seed of karma sprouts all over again.

Meaning : The very same multitude of beings (that existed in the preceding day of Brahma) being born again and again, merge (into the unmanifested), in spite of themselves, O Partha, at the approach of night and re-manifest at the approach of day.

Meaning : All the worlds, including the realm of Brahma, are subject to return; but after attaining Me, O Arjun, there is no rebirth.

3. Karma and the mind (the reference here is to the intellect)

A. Desire leads to performing of karma

Meaning : Man is a desirous creature. He is driven by the desires to act. Whichever activity he performs, becomes his karma and whatever karma he performs, experiences the fruit of that karma.

Meaning : The seed of karma is embedded in the vibrations of the mind.

C. Mind – the promoter of karma of mind, speech & body

With regard to human beings (superior birth), animals (average birth) and birds (inferior birth) the one that takes shelter of the mind, speech and body, and one that is promoter of the karmas having characteristics as mentioned ahead, is very much the mind.

If you cast off your ego, the beastly form of karma will automatically be hurled away. An egoistic collection of karmas is the ‘karma beast’. The karma resulting from ego is ugly and one that entraps in bondage.

E. An individual begets a birth as per his karma in previous births

If it is assumed that an ordinary individual is 100% unhappy in the current birth, then the proportion of unhappiness that he will suffer in subsequent births is as provided in the table ahead.

Since an average individual does not perform spiritual practice, he keeps generating a ‘give-and-take’ account with others and thus gets entrapped in bondage. Besides, mistakes committed during the performance of karma increase the demerits. This only compounds the unhappiness birth after birth. This explains why once the downfall starts, it is difficult to come out of it birth after birth.

4. How to perform karma without getting entrapped in it ?

A. Refrain from sakam karmas performed with the desire to acquire worldly happiness; for desires and sanskars originate from them.

B. Never leave any karma incomplete.

C. Every karma should conclude with happiness at least at the psychological level.

D. Instead of performing karmas we like and attain happiness, true happiness lies in doing whatever we do with interest and doing things as advised by the scriptures or Saints.

E. Do not desist from karma

Meaning : Do you perform obligatory karma; for karma is superior to not performing karma; and even the bare maintenance of the body would not be possible if you are inactive. With the fear of sinning while performing karma, never give up karma. In a state of meditation or a Jivanmukta state, karma automatically ceases to exist.

F. Maintain equanimity about the success-failure of karma.

G. Do not have expectations about the fruit of karma : Be it karma or its fruit, absolute sacrifice of love, attachment and desire is essential.

Meaning : With the mind purified by devotion to performance of karma, and the body conquered, and senses subdued, one who realises one’s self as the self in all beings, he remains untainted, even though performing karma.

I. To be able to reach a stage of being karmatit, allow things to happen as destined : Become a dried leaf caught in a storm. Go wherever the storm takes you. No destinations, no rest, no shore, just keep drifting. Perform this experiment. Let things happen on their own. Let there be neither reaction, nor even slightest of resistance. Once you begin to drift like a leaf, you will get a slight glimpse of the karmatit state. This itself is samarpan (Complete surrender).

J. Sacrifice of all resolves is the state of yogarudha.

5. Essence of Karma-yoga is incessant performance of

swadharma (Own Dharma)–karma and prescribed duties, devoid of all attachments

A. Any karma except the one performed as swadharma becomes a bondage

Karma implied by Karma-yoga is not just any karma; it is karma as prescribed by the Vedas, meaning abiding by our Dharma.

Meaning : The world is bound by karmas other than those performed for the sake of Yadnya; do you, therefore, O son of Kunti, perform karma for Yadnya alone, devoid of attachment.

B. It is essential to perform karma as prescribed in the scriptures for uniting people

6. Causes for getting entrapped in Karma

The meaning of this sentence is :

We develop love, attachment for objects or individuals that give us happiness. On the other hand, we develop hatred for people or objects that cause sorrow. Karmas associated with attachment, hatred, etc. are always faulty and entrap us in bondages of karma.

7. A karma performed as a duty does not entrap in the bondage of karma

Meaning : When obligatory work is performed, O Arjun, only because it ought to be performed, leaving attachment and fruit, such relinquishment is regarded as sattvik (Sattva-predominant).

8. Once liberated from the bondage of karma, we attain God

Meaning : Thus shall you be freed from the bondage of karmas, bearing good and evil results; with the heart steadfast in the Yoga of renunciation, and liberated you shall come unto Me.