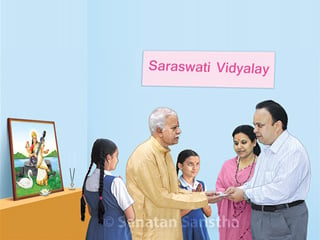 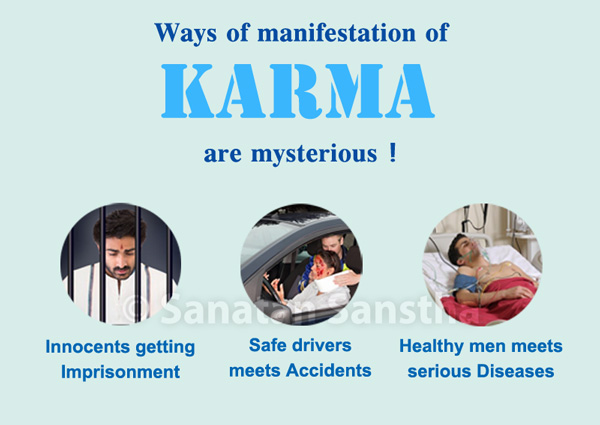 This article explains the special characteristics of Karma-yoga and Karma fruit.

1. The pace (extent) of karma is mysterious

Meaning : For verily, (the true nature) even of karma should be known, as also, (that) of vikarma (Prohibited karma) and of akarma; the nature of karma is impenetrable.

2. There is no destruction of Karma fruit

If a scientist gives up his research work midway, he will not enjoy the fruits of whatever effort he has put in. However, this concept does not exist in Karma-yoga. Even if karma is left incomplete, the karma fruit of karma performed is assured in the form of purification of chitta.

Let us presume that while preparing an allopathic medicine, the ratio of the ingredients is incorrect; then, the medicine can have a harmful effect and the pharmacist making the medicine will beget its demerit. In Karma-yoga on the other hand, there are no harmful consequences, and no sin. In all our religious ceremonies, the resolve is –

which means – May we be showered with the grace of God that is obtained due to elimination of accrued demerits.

When following Karma-yoga, even if we make a mistake while performing a karma, as it becomes an akarma-karma, there is no question of a sin being committed.

4. Sakam and nishkam are not qualities of the karma, but that of the doer, and equanimity is Yoga

Explanation : ‘Shrikrushṇa wants to relieve Arjun of his anxiety. Arjun’s greatest worry was, ‘What is the outcome of karma ? Is it success or failure ? Will the task be accomplished or not ?’ To get relieved from this worry, Shrikrushṇa asks Arjun to be yogaruḍha. Being yogaruḍha is doing a karma by renouncing attachment to the fruit of that karma. One should not be worried about success or failure. Maintain equanimity of mind in both the circumstances. Arjun asks, “Whether a karma is sakam or nishkam, the doer
will get its fruit any way, is it not ?” Shrikrushṇa replies, “O Arjun, abide by Yoga and then perform karmas. It will merge the attitude of the mind with subject of worldly pleasures. Diverting this attitude from the worldly pleasures towards the soul Principle is attitude of equanimity. When the mental attitude is like this, bondage due to karma does not materialise. Here, no kriyamaṇ-karma (Wilful action) is generated”.

Being sakam or nishkam is the quality of the doer, not of the karma. Karma always has consequences. Once there is karma, the consequence is unavoidable. What connection does it have with the doer’s mind ? Without any reaction, if body parts perform karmas by being alert, then they cannot create bondage for the past, present or future; for no karma is generated at all in this case.

Roasted seeds do not germinate. They are useful only for eating. Similarly, karma should be performed with nishkam intellect (Intellect offered unto God). Only if karma is nishkam does the mind remain stable and at peace, otherwise despair is inevitable. Hence, equanimity itself is true Yoga. Yoga makes the mind happy. It ends all misery.’ – From ‘Shrimadbhagwadgeeta, Adhyaya 2’ written by Gurudev Dr Kateswamiji

5. Karma in the form of ritual for a Yadnya results in Mukti (Liberation)

Every karma has a fruit, meaning, consequence. The very purpose of rebirth and death is to experience these fruits. Man gets entrapped in that cycle. Karma performed for a Yadnya provides Mukti. Yadnyartha-karma (Karma for a yadnya and swadharma [Own dharma]-karma should be performed as Yadnya. It is a karma that provides Moksha [Final Liberation]) are karmas that are free of bondage. Even if karma is performed without having any expectations, it yields fruit all the same. No individuals wish that their lifelong efforts be unproductive. Even our Controller or the Creator does not wish so. Here, whatever the fruit that is due will be obtained; but there will be no worry. The chitta is free from anxiety and worries. Freedom from worry is accompanied by freedom from bondage too.