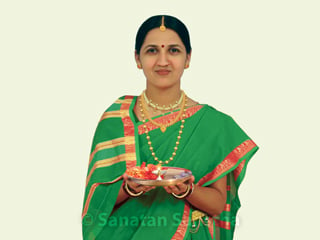 Any attire unknowingly influences the attitude of the wearer. Sattvik attire such as the six yard and the nauvari saree (Nine-yard saree), make a woman virtuous and Dharma-abiding. Abiding by Dharma increases devotion and bhav (Spiritual emotion) unto God and the individual begins to move on the path of God realisation. A nauvari saree is more sattvik than a six-yard saree. Today, the use of traditional Bharatiya attire such as nauvari saree, which in fact is the identity of the Hindu culture, has been restricted to womenfolk in the villages.

There has been a tradition of purity and modesty in Hindu culture, but the present culture is based on the demoniacal western culture. The prevalent rajasik-tamasik attire such as chuḍidar, jeans, etc. make a woman impulsive and inclined towards worldly pleasures. Due to inappropriate attire, harm is caused not only to man’s mind at the individual level, but also to the entire Nation. Attire is a powerful medium that gives form to every individual’s thought process. It is no wonder then, that the modern attire provokes the human mind to resort to violence and rapes.

In the following article, spiritual experiences of various seekers on wearing the nauvari saree have been given. From this we will be able to understand the significance of wearing a nauvari saree.

1. Divine Knowledge received on wearing of a nauvari saree and the aspects perceived

1 A. Nauvari saree worn as the Brahman women do

1 B. A nauvari saree worn in a simple manner

2. Effects of wearing a nauvari saree on the mind, intellect,

ego and the distressing energy associated with the body.

2 A. Reduction in restlessness, ego and distressing energy in the body

While preparing to dress for attending a marriage ceremony, I tried three attires – a Punjabi dress, a six-yard saree and a nauvari saree at different times. Upon wearing a nauvari saree, I experienced the following aspects :

2 B. Stability of the mind, awakening of conscience and

generation of a protective sheath around the body upon imbibing Chaitanya

3. The two ends of the pallu of a nauvari saree

protect women from both the sides – front as well as back.

Women never let the pallu be free, it is always draped over the right shoulder. As a result,

4. Why is it important for a woman to

4 A. Worshipping while wearing a nauvari saree activates the Panchaprana (five vital energies in the body) in the woman and her whole body gets charged with Chaitanya.

4 B. Chaitanya imbibed by women wearing a six-yard and a nauvari saree during the ritualistic worship is 30% and 60% respectively, which reduces the distressing energy in their mental body and bestows them with self-control, thus making them sattvik.

5. Spiritual experience related to benefits of wearing a nauvari saree

Upon wearing a nauvari saree, feeling the spread of Shakti (Energy) in my body

My son’s thread ceremony was performed on 16.4.2008. On that day, I wore a nauvari saree for the first time. On tying the first knot I felt that Shakti is spreading in me, I am wearing the ornaments of Shri Mahalakshmidevi and am fully endowed with Her weapons for a battle. – A Seeker