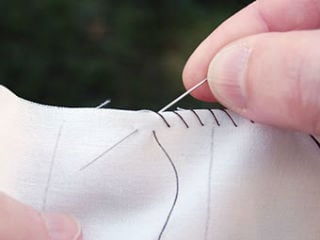 An average individual should wear sattvik clothes so that he can imbibe Chaitanya (Divine consciousness) from them. This article is about sewing cloths and effect of stitches on clothes. It also explains the benefit of wearing clothes made of uncut cloth and with minimal stitching

1. The appropriate practice of wearing knotted clothes prevalent in the earlier times

In the earlier times, men and women used to wear clothes that had to be knotted to be able to wear them. Women used to wear a nine-yard sari and a blouse with a knot. Through the knot, sattvik waves would get bound in the respective areas in the cloth and would work for the individual as per the requirement. Similarly, men used to wear dhoti which could be held by a knot or barabandi or bandi. Though the design of bandi does not have knots, it has multiple knots in the form of laces which serve to store the sattvik waves and impart the benefit to the individual as per the requirement.

2. Why should clothes have minimum of stitching ?

A. Holes pierced during the stitching process increases

the possibility of Raja-Tama waves entering the cloth through them

Clothes are stitched by piercing tiny holes in them along the required line and weaving a thread through them, creating the stitch. These piercings attract Raja-Tama waves from the atmosphere. Knotted clothes are free from buttons and have minimal stitching. Hence, there is less possibility of Raja-Tama waves rushing into clothes through the piercings created due to stitching.

B. An individual who wears an unstitched cloth

receives Chaitanya and undergoes spiritual healing to a larger extent

Since every thread in an uncut cloth remains intact, it is able to spread waves of Chaitanya all over the cloth. Therefore, when an individual wears an uncut cloth, the Chaitanya spreads in its body and it undergoes spiritual healing. For example, when a sari is worn, the extent of spiritual healing is more. When a cloth is cut, the continuity of the threads in it is destroyed. This creates obstacles in the flow of waves of Chaitanya through them, and thus, the spread of Chaitanya throughout the cloth is obstructed. Hence, wearing a stitched garment imparts less Chaitanya and the extent of spiritual healing is also less, for example, a churidar.

C. Stitching of a cloth should not be complex, for example, it should not have too many pleats.

3. Detrimental effect of stitching or sewing clothes on a machine and its remedies

A. Likelihood of developing centres of black energy is less

In the earlier days, since stitching was done by hand, minimal blows were imparted to the cloth through the medium of touch. Therefore, the extent of Raja-Tama waves accumulating in the piercings was also less. Now, however, sewing machines are used extensively for sewing clothes. They have a distressing sound generating process, on the rhythm of which the needle strikes the cloth, piercing the cloth and leading to a collection of Raja-Tama waves in the piercings. These piercings thereby get completely filled and become conducive to the formation of centres of concentrated black energy. In short, greater the impact-oriented stitches made by the sewing machine on the clothes, greater is the proportion of distressing waves emitted by the clothes.

B. In the earlier days, because of the chanting that accompanied the production

of thread on a charkha (Spinning wheel), the clothes made from the thread were sattvik

In the earlier days, thread was made by manually spinning cotton on a charkha. If this thread was spun by a seeker while chanting God’s Name, the thread would also get charged with the Name. It helped in making the cloth sattvik.

Most machines in today’s times work on electricity. These machines activate Raja-Tama-predominant centres in the human body to a large extent and are thus responsible for large scale pollution of the atmosphere.

D. In Kaliyug, it is very important to chant God’s Name

In Kaliyug (Era of strife), man is facing extreme brunt of the rage of negative energies, since every activity is taking place mechanically and from a scientific perspective. It is very difficult to go back and implement the previous sattvik lifestyle in the society today; to be able to move on in life through the difficult times, sadhana (Spiritual practice) of chanting God’s Name is advised in Kaliyug. As a result, even though the mechanically performed karmas, akarma will be attained and the Raja-Tama-predominant waves generated from them will disintegrate, and karmas will impart merits.

As mentioned in point B above, chanting while spinning the wheel, helps in making the clothes sattvik. Here, since the use of a machine is to a limited extent, the black energy generated is less. However, considering the large scale generation of black energy due to modern day electrically-driven machines, we have to chant God’s Name in a greater proportion and with a lot of concentration, so that the effect of black energy is minimized.

Reference: Sanatan’s Holy Text – “How should the clothes be from a spiritual perspective ?”