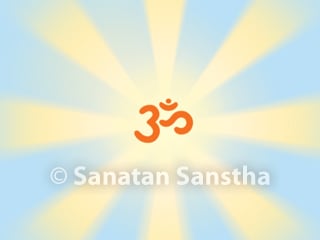 Doctrines in Hindu Dharma have been presented as imaginary on the website of a well-known news channel CNN in America or they have been criticised. There are also some misconceptions regarding Hindu Dharma. This is done only with the purpose of degrading Hindu Dharmas. There is a deep and very great Spiritual Science underlying religious traditions in Hindu Dharma and the code of conduct. If anyone tries to understand this science, then he will realize that compared to other faiths with constricted teachings, Hindu Dharma is unparalleled.

Myth : There are 330 million Hindu Gods.

Reality : There are 330 million Hindu Gods. What is the meaning of ‘Medical science has progressed today’ ? 50-100 years ago a medical practitioner used to treat patients suffering from any disease; but today there are as many branches in medical science as there are diseases. Example, their different specialists treating ladies, small children and new born infants. If we study this scientifically, then it means that, the progress of the medical science is judged by the number of new branches opened in medicine. As per the same principle, the mission and specific feature of every Deity in Hindu Dharma is different.

Shri Ganesh is the Deity of Knowledge; whereas Varun is a Deity of rain. Deity Agni is that of sacrificial fires (Yadnya). From Deity Indra to Kamdev and from Sun God to Yamadev (Deity of death), there are 330 million Hindu Deities. Brahma (Creator), Vishnu (Protector) and Shiv (Destroyer) are the three principles.

Hindus worship Principles. Shakti (Divine Energy) is a Goddess and it is also a Divine Principle. In this way every Hindu Deity has a different mission to perform. Can we go to the same doctor for getting treatment for heart, kidney, cancer etc. Likewise if we try to understand the mission of every Deity and find out which Deity Principle will help for our spiritual practice and then if we worship that Deity then we can progress spiritually very fast. According to the doctrine, as many persons as many spiritual paths, every person needs to practice Spirituality as per his constitution. This principle is not followed in Christianity and other faiths which believe in one God only. As it is futile to give the same medicine for any disease, the same way it is wrong to worship one Diety only.