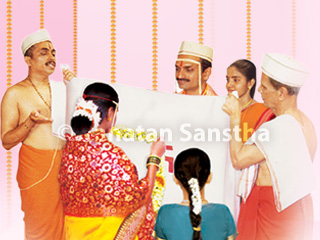 Many people have criticised Sanatan Vedic Religion (Hindu religion), which has been in existence from the beginning of creation, its religious texts, its Deities, its rituals, and spirituality. Some feel that this criticism is correct, while many inspite of realising that this criticism is spiteful, yet are unable to refute it. While some scholars or students put forth inappropriate ideas out of ignorance.

The Hindus faith becomes shaky because of non refutation of all such inappropriate ideas and criticisms and this causes degradation of Righteousness. To prevent this degradation of Righteousness and to give the Hindus the intellectual strength, the refutation of inappropriate ideas and criticisms about ‘the sacrament of Marriage’ is given below.

1. Anglicised Indians who,  call the ritual of “Kanyadan” (giving away of the bride)  barbaric without understanding the Science

‘Salankrut Kanyādān’ (adorning ones daughter with jewels and then giving her away in marriage) is dowry ! Is one’s daughter an item that can be given as alms? Kanyādān is barbaric. The barbaric culture of making a woman an object of barter is prevalent even in the present times.

A. There is a pure intention behind the custom of ‘Kanyadan’ : ‘Saint Tukaram Maharaj says, “ salankrut kanyadan is like donating land.’ Was Saint Tukaram Maharaj barbaric? Love marriage is called ‘Gandharva Vivāh’. Gandharva Vivāh does not have the ritual of kanyadan. Kanyadan is not a form of dowry. Kanyadan is not monetory. There is no expectation of monetary benefit (like getting dowry) here. There is no such thought or idea. Salankrut Kanyādān! The gold ornaments and jewellery given to the bride by her father, brothers and relatives is Salankrut Kanyadan. There is not even an iota of concept of money of any monetory thought here. Do not forget that the meaning of the word ‘dan’ is ‘sacrifice’” – Gurudev Kateswamiji (Saptahik Sanatan Chintan, 11.9.2008)

B. There is a difference between ‘dowry’ and ‘giving away the bride’ and the jewellery is the girls streedhan (woman’s wealth) : The jewellery given to the bride by her father during the wedding is the Streedhan of the bride. She alone has the right to own it. During the ritual of Kanyadan the bride’s father says to the groom, “with the five elements and the Deities as my witness I give to you this good looking, healthy and bejewelled girl, thinking you are like Shri Vishnu, in the desire to attain Brahmalok (the abode of Lord Brahma) and also for the salvation of my ancestors”. And the groom replies, “I accept this girl for the perpetuation of Righteousness and progeny.” From this the difference between dowry and ‘giving away’ becomes clear. Hence there can be no comparison between them.

2. It is said, getting to know one another’s personality by living together before marriage reduces the incidents of Divorce !

‘Getting to know each other’s personality and natures by living together before marriage will reduce divorce !’ – Dr. Pramod Salgaonkar ( Expressed these thoughts at the programme organised at the ‘Braganza Institute’ in Panaji,Goa)

B. High promiscuity increases psychological instability and life does not remain happy contented and stable. This has made the westerners too realise the importance of family.’ – H.H.Pande Maharaj, Devad, Panvel.

3. The Communists view about the institution of marriage

‘Lineage, family-code, tradition together form religion. Communists feel that ‘religion is like handcuffing a person’. As marriage brings constrains on man’s free life, that  it does not satisfy his carnal desires, marriage has been deemed disposable by Marx and modern society. They follow the Glass –water theory, ‘Drink water when thirsty. For this it is not necessary to carry a glass’ is the opinion of the communist. They also say that the government shall look after the children.

A. The Hindu society is based on the science of Righteousness and human beings benefit through the institution of marriage : Communist say that ‘government is better equipped to look after and nurture the children than the individual parents’. How long has this thought been prevalent? Communism has dissipated in just 60 -70 years after it took root in society. USSR became fragmented. Our social system is based on science. The purpose of marriage in Hindu society is to create good people, eternally preserving Righteousness and culture, achieving man’s worldly good and also attaining spiritual contentment. We preserve the continuity of lineage by following class code, family code etc. The progeny that is created through our marriage will be there as long as there are rivers, mountains and forests on earth.’ ( Saptahik Sanatan Chintan, 6.11.2008)

B. People in society have a good character through marriage while promiscuity takes them towards degradation : ‘All species including humans are Bhog yonis (species that enjoy desires and carnal pleasures) but only humans have the ability to control his carnal desires and through sādhanā uplift himself. And for this marriage is important. Spiritual up-liftment is the goal of man. And the carnal desire in man is present only for reproduction. Through marriage, life becomes happy as one attains happiness and affection, society becomes righteous, while promiscuity makes man an addict as there is nothing to bind him. Promiscuous life makes man’s life baseless and leads him to ultimate degradation. The ill-effects of promiscuity can now be seen in the Westerners.’ – H.H. Pande Maharaj, Devad, Panvel.

3B.  Communists who are misguiding the people by calling promiscuity as ‘Kāmsantarpan’ (satisfaction of sexual desire) !

Communist believe, ‘This is not promiscuity, it is Kāmsantarpan (satisfaction of sexual desire)’. Present society gives permission for extra marital relationships for the satisfaction of carnal desires.

A. Immorality gets acceptance through promiscuity : ‘This means that modern society accepts promiscuity! Kāmsantarpan is all rubbish. Promiscuity always is a form of revenge. Promiscuous person always gives various explanations like it is love etc to give credence to their immorality. People with superiority complex have powerful emotions. But emotions cannot give credibility to all things.’  ( Saptahik Sanatan Chintan 6.11.2008)

B. The progeny born out of promiscuity goes on the negative ways and so causes the degradation of society : ‘ Though modern society accords acceptance to extra marital relationship for the satisfaction of carnal desires one should take into account its ill effects as well. The children born in wedlock get good upbringing love and protection. But the progeny of promiscuity is deprived of all this and go on the wrong path and become addicts. This causes the degradation of society as well. This is the reason for the fall in values in the west. Lust cannot give constant love. Promiscuity and free life create diseases like AIDS and its bad effects have to be borne later.  That is, man destroys his life for the sake of satisfying his momentary desires.  What is the use of such temporary happiness?’- H.H. Pande Maharaj, Devad, Panvel.