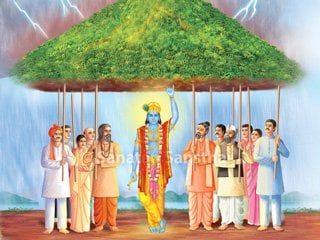 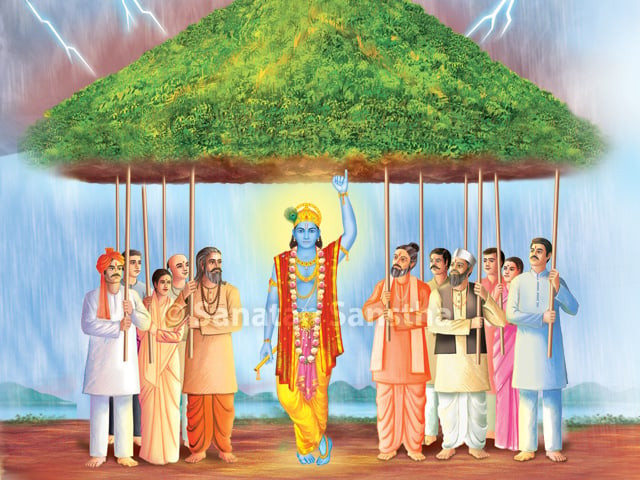 Krushna (कृष्‍ण): ‘(आ)कर्षणम् करोति इति’ means the one who attracts. Krushna was born on the eighth day (ashtami) of the Hindu lunar month of Shravan. The number eight is a reducing number (kshayank). Rama was born on the ninth day (navami) of the Hindu lunar month of Chaitra. Nine is a complete number (purnank). According to numerology number eight is responsible for generating revolutionary thoughts. It would not be wrong to say that Krushna’s entire life was an era of revolution.

A. From birth till the naming

Devaki and Vasudev were the parents of Krushna. On the command of Lord Vishnu, the Great Illusion (Yogamaya) placed the seventh child of Devaki in the womb of Vasudev’s second wife, Rohini and Herself entered the womb of Devaki. After birth when Kansa came to kill Her, She escaped from his clutches and left for Her abode. Krusshna is Devaki’s eighth child. After He was born, Vasudev took Him to the home of Nanda and Yashoda in Gokul. Vasudev also sent Rohini along with her son to Gokul. The priest of the Yadu dynasty,

Sage Garga at the request of Vasudev, secretly performed the naming ceremony of both the children, Rohini’s son as Rama and Devaki’s as Krushna. Later Rama came to be known as Balaram because of the tremendous strength that He possessed.

B. Childhood for only seven years

Krushna went to Mathura to slay Kansa at the age of seven years. It was then that His childhood ended.

means the place where cattle graze and roam is Vraj. Since Infant Krushna’s divine play took place here, this place is said to be sacred.

After the slaying of Kansa and the thread ceremony, Balaram and Krushna went to the ashram of Guru Sandipani in the city of Avanti. There within a span of sixty-four days He learnt the fourteen types of sciences (vidyas) and the sixty-four arts (kalas). Generally to learn one science one requires two to two and a half years.

He was close even to people who were much older than Him. At the age of just seven Krushna did not allow the milkmaids to go to Mathura because He did not want the money that was procured by selling milk to evil Kansa. Since then, the elders began to heed His advice and He proved true to their faith.

Krushna’s beauty was unparalleled. All would get enticed by it.

To capture Krushna, Jarasandha’s armies surrounded Mathura eighteen times. Nowhere in the world have so many attempts been made to capture an individual. Kansa ferried 280 elephants on wooden rafts across the Yamuna river. He surrounded Mathura for three months, but Krushna could not be captured because He would change His home everyday. Apart from this the thousand children living in Mathura also wore peacock feathers in their hair to resemble Krushna. Kansa’s soldiers assaulted them, yet they did not reveal ‘who the real Krushna was’.

Krushna loved the arts of dance, music, etc. and was an expert in them. His playing of the flute and His performance of the rasa dance (rasakrida) are famous. Even the animals and birds would get enticed when He played the flute.

A. The one who did not tolerate injustice (valorous)

Krushna either fought Himself or assisted others in fighting the injustice caused by Kansa, Jarasandha, the Kouravs, etc.

B. The one who was conscientious about His duties towards society

Realising that the 16,000 princesses released from Narkasur’s prison would not have any social standing which would result in several problems, Krushna married them.

C. The one who worked for the welfare of others

Some people criticise Krushna’s behaviour. However all that He did was for others’ welfare. At times, He even broke norms, for instance, when slaying Jarasandha, during the abduction of Subhadra so that she could marry Arjun, marrying the 16,000 women, etc. During the Bharatiya war He had pledged that ‘He would not wield a weapon’. Yet to fulfill Bhishmacharya’s vow that ‘I will make Krushna wield a weapon’, Krushna broke His vow and attacked Bhishmacharya with a weapon (a wheel).

D. The one who guided others for the welfare of society

‘Protection of society was His objective and He had realised that it was necessary to annihilate the troublemakers and evildoers to achieve this end. Destruction of evildoers is never possible by remaining steadfast unto truth and purity alone. Realising this sad shortcoming in the history of mankind, to protect truth and purity they have to be curbed in worldly interactions. If that is not done, then in this lawless world, cruel demons triumph, society deteriorates and the subjects are destroyed. This was the firm decision of His intellect. It is because of this that many a time “Often the untruth seems superior to the truth”, “One has to give up Righteousness (Dharma) and fight”, “Bhimsen will not be successful if he fights righteously, it is essential to fight unrighteously”, etc. is the advice that He often preached.’

A. An excellent orator

With His eloquent speeches, Krushna was able to win over several people to the camp of the Pandavs.

B. An ideal ambassador

Krushna presented the case of the Pandavs in the royal court of the Kouravs in an excellent manner.

C. The one who made good use of psychology

At the opportune moment Krushna told Karna the secret of his birth and thus upset his mental composure.

A. An expert in warfare

B. Brave and valiant

Krushna slew Kansa and several other kings, established the golden city of Dvarka, yet did not ascend the throne. Despite this undoubtedly He was the uncrowned emperor of His times.

During the rajasuya sacrificial fire (yadnya) of the Pandavs, Krushna washed the feet of the Brahmans and even cleared up leftovers of food in others’ plates.

The philosophy preached by Krushna is given in the Gita. ‘In His philosophy Krushna has shown the appropriate admixture of attachment and detachment. He has accepted the Path of Action (Karmayoga) according to the Vedas, Path of Knowledge according to the Sankhya philosophy, suppression of the tendencies of the subconscious mind according to the Path of Yoga and renunciation (sannyas) according to the Vedanta, but has opposed the view that each one of them is the ultimate by itself as proposed by them. He balanced the appropriate significant part of each one harmoniously and created a new doctrine based on actions devoid of expectations or results. In the Bhagvadgita He has mainly preached how one should carry out one’s duty. The scriptures decide what one’s duties should be, but He has explained excellently how to execute them well. In the Bhagvadgita He has narrated to Arjun how to convert attachment to detachment and vice versa and how man should execute his duties.’

Krushna eliminated Arjun’s doubts by narrating the Gita to him verbally and imparting him with spiritual experiences which are beyond words. During the Bharatiya war Krushna had adopted the dnyanmudra (mudra of knowledge).

13. The one with the attributes of God

A. Supernatural powers and a peacock feather

The centre of minute observation is the focus of suprasensory energy. When it gets activated the house of Vaishvanar and the horoscope in it assume the form of a peacock feather. The peacock feather adorned by Lord Krushna signified that this centre in Him was perpetually active. For more information on this refer ‘Science of Spirituality : Vol. 18 – Path of Activation of Spiritual Energy (Kundaliniyoga) and Path of Transfer of Energy (Shaktipatyoga)’.

B. A lover of all living beings

When the king of bears Jambuvant, requested Krushna to marry his daughter Jambavati, despite opposition from others, He married her. It is difficult for one to even conceive of such an idea.

14. Effects of His Special features

The following examples will illustrate the effects of all His special features on others.

1. In the Bharatiya war, no one ventured to attack Krushna. The other charioteers were attacked.

2. After the war, there was a conversation between a vulture and a fox about the deceased. In it, they have discussed the faults of all men, including those of Yudhishthir; but not a single one of Krushna.