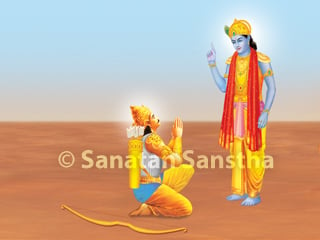 The Mahabharat and the Gita

1. The Mahabharat is the most important part of Krushna’s life. Written by Sage Vyas it is a prominent historical text. Bhiíhmacharya was the ‘Guru’ of the Kouravs in the Mahabharat. Before Bhishma’s birth His mother Ganga had abandoned His seven elder brothers (vasus) in the river Ganga. Krushna was the Guru of the Pandavs. Kansa had slain Krushna’s seven elder siblings.

2. At the time of the Bharatiya war Krushna was about 83 years old while Bhishma was more than 130 years old.

3. The Gita makes a mention only of the four persons given below.

4. Krushna narrated the Gita only to Arjun for the following reasons.

5. The Uddhavgita: When Krushna renounced His body His great friend Uddhav was greatly bereaved. What Krushna preached to him at that time is called the Uddhavgita.

He has balanced the appropriate significant part of each one harmoniously and created a new doctrine based on actions devoid of expectations or results. The Bhagwadgita mainly preaches how man should carry out his duties. The scriptures decide our duties; but He has explained beautifully how to carry them out in the best possible way. In the Bhagwadgita, He has narrated to Arjun how to convert attachment to detachment and vice-versa, and how man should execute his duties.’

7. The Dnyaneshvari describes the Gita as

Consider the Gita as the idol of The Lord
embellished with words. – 18:1684

8. Anugita: When Krushna realised that the effect of the Gita on Arjun’s mind was wearing out, He narrated it to him once again. This repetition is called the Anugita. Anu means later. So,the Anugita is the Gita which is narrated once again.