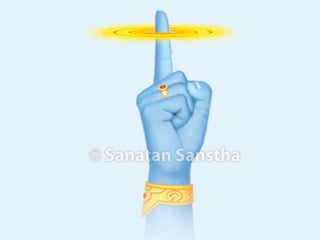 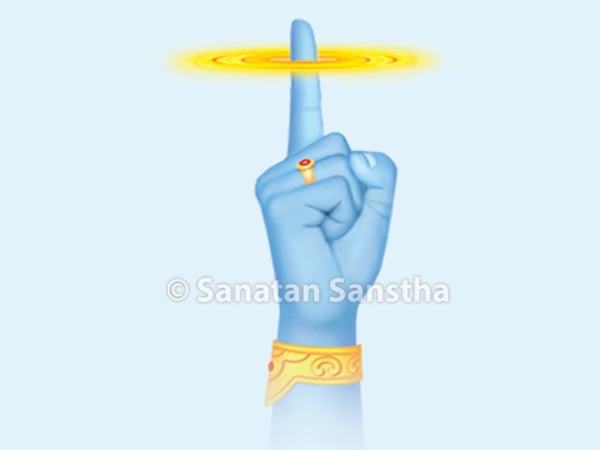 The word sudarshan chakra (सुदर्शन चक्र) is derived from two words, su (सु) and darshan (दर्शन). It means the vision (darshan) of which is auspicious (su). The word chakra is derived from chruhu (चृ:)which means movement and kruhu (कृ:) which means to do. Thus, chakra means that which is constantly in motion. Of all weapons, this is the only one which is in constant motion.

There are various schools of thought regarding its creation as given below.

A. It was created by the combined energy of Brahma, Vishnu and Mahesh.

B. This was given by Bruhaspati to Vishnu.

C. Krushna procured it from the deities (devatamandal).

D. Krushna and Arjun assisted the fire deity (Agni) in burning the Khandav forest. In return He presented Krushna with a Sudarshan-chakra and a koumodaki mace.

B. After its release, the enemy is annihilated and it returns to the one who has wielded it.

C. Even after releasing it, it remains within the control of the one who has wielded it.

D. It travels along the shunyamarg (path of zero stress nature) and hence, can reach anywhere
within a moment.

E. When the enemy poses an obstacle, its speed increases. This is known as the hansagati.

F. It is noiseless.

Information with regard to its composition is as given below.

A. ‘It is said that it has six spokes and its centre is composed of vajra. It is believed that the words “Sahasrat hum phat (सहस्रात्‌ हुं फट्‍)” are inscribed on each of the spokes.

B. A novel description of the discus has been made in the Vaman Puran (82.23-26). Mr. Vasudevsharan Agraval expresses it as: The discus has been described as the discus of time (kalachakra). It consists of twelve spokes (Dvadashar, Rugveda 1.164.11) and six navels. The twelve spokes represent the twelve months of the Hindu lunar calender and also the twelve deities (Vij, Agni, Som, Mitra, Varun, Indra, Indragni, Vayu, Vishvedev, Prajapati, Dhanvantari, etc.). The six navels represent the six seasons.’

C. Parts of the Sudarshan chakra and the implied meaning

5. Illustrations of its use

A. When Shri Krushna lifted the Govardhan mountain for support He held the Sudarshan chakra below it.

B. Krushna used it to slay Shishupal.

C. It was used to create an artificial sunset so that Jayadrath could be annihilated. However it was not used by Krushna in the Bharatiya war or in any other battle to slay anyone.

D. When Arjun said that Hanuman (Maruti) would not be able to break the bridge of arrows created by him, although Maruti jumped on it, it did not break. This was because to help His friend Arjun, Krushna had supported the bridge placing His Sudarshan chakra below it.

E. When Shri Vishṇu was enraged with Sage Durvas for having needlessly cursed His beloved devotee King Ambarish, He hurled the Sudarshan chakra at the Sage. The petrified Sage ran to the Deities, but none could rescue Him. Finally, when He went to Shri Vishṇu, He told the Sage to beg the king for forgiveness. When the Sage complied, Shri Vishṇu withdrew His Sudarshan chakra.

F. It is quoted in a holy text of the Nath sect that once Gorakshanath had stopped the Sudarshan chakra.

6. Science behind the idol

The Idol of Sudarshan is ferocious. It has sixteen arms adorned with a conch, a chakra, a bow, an axe, a sword, an arrow, a pike, a noose, a goad, fire, a rhinoceros horn, a shield, a plough, a pestle, a mace and a spear as weapons. In some places, it is customary to consider an Idol of Sudarshan chakra as that of Shri Vishṇu.