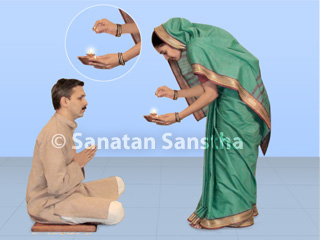 This is the day of beginning of calculation of time as per Vikram Samvat. In the first century BC, Shakas attacked Bharat. The King of present Ujjain, King Vikramaditya, trained the youth of Malwa in martial arts. He attacked Shakas and drove them out of the country and established a kingdom based on religion. As a symbol of the victory, Emperor Vikramaditya started count of time named Vikram Samvat. This is prevalent since 57 B.C. This shows how ancient is the concept of time calculation in the Bharatiya culture. Kartik Shukla Pratipada is the half day of the three and half auspicious days falling within an year. This is one of its importance.

Balipratipada is celebrated on Kartik Shukla Pratipada. As per Hindu Scriptures, on this day Bhagawan Shri Vishnu sent the King of demons, Bali, to Hell and curbed the loss to the Universe due to his misplaced philanthropy. Due to the excessive philanthropy of King Bali, wealth was acquired by ineligible people. This adversely affected the world. Then, Shri Vishnu incarnated as Vamana and requested land enough to place His three feet. Then Vamanadeva assumed expansive form and covered entire Earth and outer space in two feet. King Bali offered Him his own head to place His third foot. Before sending King Bali to Hell, Vamanadeva graced him with a boon. King Bali asked for three days of his kingdom on Earth. These three days are – Kartik Krushna Chaturdashi, Dipavali Amavasya and Pratipada.

Kingdom of Bali: As per the religious Scriptures, in the kingdom of Bali, people should enjoy as per their wish barring the actions forbidden by the Scriptures. The actions forbidden by the Scripures are consuming non-vegetarian food, alcoholic drinks and company of inappropriate women. However, today we see an excess of this. On these days people burst firecrackers in excess and cause loss too national property. Some people engage in gambling. Most people keep up till late in the night eating, watching movies, plays etc.

Method of celebrating Balipratipada: On Balipratipada, married women do arati of their husband after abhyangsnan. In the afternoon meal various dishes are made. Some people worship the image of King Bali along with his wife, Vindhyavali. The objective of this worship is that King Bali should not cause distress to people on Earth with his power and so that he pacifies the other negative energies.

On this day Srikrushna started the worship of Govardhana in place of that of Indra. Govardhanapujan is done in memory of this. Scriptures prescribe that a summit of Govardhana mountain be done. It should be decorated with trees and flowers. However, in many places it is made in human form and decorated with flowers. Following prayer is offered:

Meaning: O, Govardhana, Who supports Earth! You are the protector of Gokul. Bhagawan Srikrushna had lifted You on His arms. Bestow crores of cows on me.

After Govardhanapujan cows are worshipped. Cow is considered to be Sri Lakshmi. After worshipping her a prayer is offered for obliteration of sins. In the Dharmasindhu, prayer is offered to the cow with the following verse:

Meaning: O cow, who is Lakshmi Herself in the form of a cow and who bestows ghee for yadnyas, obliterate my sins.

In some places picture of Govardhana along with Bhagawan Srikrushna, Gopal, Indra and cow with calf is drawn and worshipped.

In ancient times the residents of Vraj would offer 56 delicacies and 36 dishes to Indra in His worship. In its remembrance after Govardhanapujan the Annakuta festival is celebrated.

‘Margapali’ means the festoon hanged on the road. In the Dharmasindhu and Adityapuran it is advised to make a long and strong rope of Darbha (sacred grass) and fasten leaves of the Ashoka tree and make festoons. These should then be tied at the entry point of the village on high pillars. They should be worshipped with sndalwood paste, flower etc.

Meaning: O festoon on the road, bestowing happiness to all living beings, I pay obeisance to you. Do come again for my vowed religious observance (vrat).

Pray in this manner to the ‘Margapali’. Then the main man of that place followed by the men and women of the place should enter the village joyously giving victory slogans. Then the main man should get the aukshan done through the married ladies. By walking under the ‘Margapali’ happiness and serenity prevails in the coming year, the diseases are dispelled and along with the residents, the animals also remain heathy and joyous.

As per Hindu Dharmashastra, Kartika Shukla Dwitiya is one of the three days of worshipping Yama to prevent untimely death. It is popularly known as Yamadwitiya and Bhaiduj.

3.1 Why is Kartika Shukla Dwitiya called as Yamadwitiya and Bhaiduj?

As given in Hindu Scriptures, on Kartika Shukla Dwitiya due to the presence of frequencies of Yama in the environment, one can face various distresses like untimely death, accident, sudden attack of mental illness due to amnesia, fit like attacks or many obstacles in the task in hand. To restrict the Yama frequencies, worship of Yama and related Deities is performed.

On Kartika Shukla Dwitiya Yama leaves His home and enters His sister’s home, that is Earth. Hence, it is known as Yamadwitiya. As a symbol of Yama visiting His sister, every man does not consume meals prepared at home, i.e. by his wife, but goes to the house of his sister to have the meal.

3.2 Rituals to be performed on Yamadwitiya

3.3 Science underlying worship of Yama and related Deities by brother and sister

During Dipavali, Yama frequencies descend in higher proportion. During these days any action done with respect to Yama and related Deities gives benefit in a short time. Hence, Yama is worshipped on Kartika Shukla Dwitiya. Ritual is performed as follows :

On this day, sisters do aukshan of Yama in the form of brother and invoke Him. They felicitate Him appropriately and pray to him to restrict the frequencies of Yama moving on Earth and the unsatiated subtle bodies from Pitruloka.

Method of aukshan, that is, arati of brother by sister:

From this it is clear, that by doing aukshan of brother by sister, both derive benefit.

After aukshan brother consumes food cooked by his sister. If one does not have a sister, then meal should be consumed at the house of any cousin sister or assuming any known woman as sister.

3.5 Gift from brother to sister

After the meal, the brother felicitates the sister by giving her a gift like clothes, money etc as per his capacity. If the gift is sattvik, it is more appropriate. For example, Holy texts about spiritual practice or Dharma, clothes useful for ritualistic worship of Deities. The gift should not be tamasik. For example, a CD of an inappropriate movie.

3.6 Benefits of celebrating Bhaiduj to brother and sister

On Yamadwitiya, that is, Bhaiduj frequencies of bliss are emitted from the Universe. There is 30 % more benefit of these frequencies to all beings compared to other days. A benefit gained by the brother is:

The above points show the importance of festivals mentioned in Hindu Dharma. H.H. Pandey Maharaj from Sanatan ashram, Panvel, says “Bhaiduja is a day to destroy the malice, jealousy, enmity present in the mind and to awaken brotherhood. Wherever men will consider women as their sisters and perform their duty of protecting them, when all the women of any society and nation will be able to move fearlessly in society with respect and dignity, only that is real Yamadwitiya.”