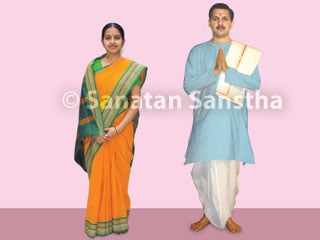 The scriptures have stated specific actions on the perspective of a person while wearing new clothes and how to derive benefit at the spiritual level.

1.1 Reasons for auspicious beginning to wearing of new clothes on a particular day

The Deities sometimes arrive on the earth in subtle form on auspicious days, on the days of festivals and on the days of religious rituals. To get adorned with ornaments and clothes on these days is akin to welcoming their arrival. It pleases the Deities because of which they bless us, and we can imbibe their waves. Wearing new or silk clothes on the days of festivals attracts the Principles of Deities maximally towards those clothes and makes them sattvik. The waves of Deities attracted towards the clothes are retained for a longer period, and the one who wears them throughout the year benefits all year round.

1.2 Underlying science in placing new clothes in front of the Deities before wearing them

Hindu Dharma advises us to lead a life associated with Brahman, devoid of any attachment. Each activity and thought leads to the development of attachment to related objects. Due to thoughts of attachment, possibility of being trapped in Maya (The Great Illusion) is more; an example is of wearing clothes. We have more attachment to new clothes. Offering our new clothes to other individuals will amount to worshipping the divinity in the other individuals and then wearing those clothes as Prasad (Holy sacrament) given by the Deity. This act will reduce our attachment towards the clothes. Dharma advises us to offer everything to God first and then receive it as Prasad and benefit from the Chaitanya. Our Dharma advises us to perform every act with sattvik thoughts about God. Hence, the tradition of offering new clothes to others to wear first or keeping them in front of a Deity before wearing them for the first time.

1.3 Underlying science in offering new clothes to others to wear first

Hindu Dharma teaches how to live a life devoid of attachment and associated with Brahman. Through actions like wearing of new clothes, attachment towards the clothes can be created in a person’s mind. To prevent this, the scriptures have advocated that new clothes be offered first to someone else to wear. Offering the clothes first to someone else to wear amounts to worshipping the Deity’s Principle in him and then wearing them considering them to be a Prasad of the Deity. If we offer new clothes to a sattvik or spiritually evolved individual, the benefit of sattvikta that a individual will derive through those clothes will be greater.

Whom to give and whom not to give the clothes to wear first?: New clothes should not be given first to a person who is severely distressed by negative energies. When such a person wears the clothes, distressing frequencies are absorbed and accumulated in the clothes. After this, when a person wears the same clothes, he can be distressed by these frequencies. As against this, by giving the Sattvik new clothes to a spiritually evolved person to wear first, provides the benefit of Sattvikta through the clothes.

As stated earlier, it is more beneficial to keep the new clothes in front a Deity, praying for obtaining Chaitanya through the clothes and then wearing them.

1.4 Underlying science in washing brand new clothes, before using them

During its production, a cloth goes through many hands. As a result, the ability of the clothes to absorb Sattvik frequencies is less. When they are kept in a shop for sale, the clothes are touched by many. This may increase the possibility of attack of negative energies. As a result, there is a possibility of the person suffering distress. Hence, we should wash the new clothes before wearing them. Washing the new clothes enhances their ability to absorb the Sattvik frequencies and make them free flowing.

According to the Vishnusmruti, used clothes must not be worn without washing them. Wearing soiled clothes increases the possibility of the body suffering from various diseases and the mind being afflicted with Asattvik thoughts. Contact with washed clothes helps increase the Sattva in the body and the person progresses towards the spiritual aim.

2.5 Effects of wearing unwashed clothes with perfume sprayed on them

Hence, the attacks by negative energies may be more on the person wearing perfumes.