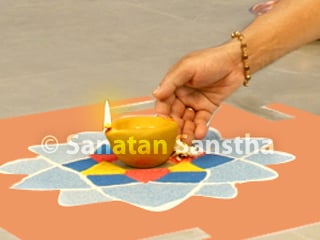 In the Dipavali period, offering of a lamp (dipadana) is done on the three days of Dhanatrayodashi, Narakachaturdashi and Yamadwitiya.

Meaning: By placing a lamp outside the house for Yamadeva in the evening of Trayodashi of the dark fortnight of Kartik, the untimely death is averted. Yamadev gave an assurance to his attendants that those who performed dipadana on Dhanatrayodashi will not suffer untimely death.

2.2 Substances of worship required for Yamadipadana

In the ritual of Yamadipadana there should be sandalwood paste, flowers, turmeric, vermilion, consecrated rice, that is, unbroken rice etc. in the ritualistic platter. Similarly for the purpose of achaman a copper platter, tumbler (panchapatra), spoon (achamani) are also necessary. For the purpose of Yamadipadana special lamps made of kneaded wheat flour mixed with turmeric powder are used.

Science underlying drawing a rangoli associated with the Krushna Principle for placing a lamp at the time of Yamadipadana: For installing the lamp for the purpose of Yamadipadana a rangoli of Srikrushna device (yantra) is drawn. There is a special importance of making a rangoli of Srikrushna yantra in this manner for the purpose of Yamadipadana. Before the ritual of worshipping a lamp, a resolve is made after invoking Sri Vishnu with His 24 Names. ‘Srikrushna’ is a complete incarnation of Sri Vishnu. Yamadeva also has Srikrushna Principle. For this reason the arrival of Yamadeva occurs in the form of Principle at the venue of the ritual in a short time. The distress caused to a person because of the inertia-indicating frequencies associated with death is reduced as a result of the worship of Srikrushna and Yamadeva. Shiva Principle is also present in Yamadeva. For this reason rangoli associated with Shiva Principle is also drawn.

Subtle effect of ritualistic worship of the lamp:

Other rituals performed in the ritualistic worship are:

2.4 Effects of placing the worshipped lamp outside the house facing south

Frequencies of Yama are attracted and emitted in higher proportion from south. Subtle process taking place by installing the lamp to south is as follows:

Deity of the place (Sthandevata) and Deity of the premise (Vastudevata) arrive in Principle form to take darshan of Yamadeva. All members residing in the premise benefit by the arrival of these Deities. As the Yama frequencies come closer, by offering the worshipped lamp to Yamadeva, it is acquired by Him in a short time and easily. Hence, the person is protected from the frequencies that cause untimely death.

With reference to Yamadipadana, a Saint from Sanatan ashram, Panvel, H.H. Parasharam Pandey Maharaj states, "Yama is the Deity of death and Dharma. We should be constantly aware that death of every person is certain. Offering the lamp to Yamadev we should pray that ‘We are offering the lamp as a symbol of alertness and light, please accept it’."

3. Ritualistic worship of treasury by merchants

Commercial year is from one Divali to subsequent Divali. Account books of New Year are bought on this day. At some places merchants worship their treasury. Thus, from the spiritual practice of merchant (Vaishya) class, moving ahead on the path of Spirituality becomes possible for the traders. On the day of Dhanatrayodashi, new vessels of gold or silver or new clothes are purchased.