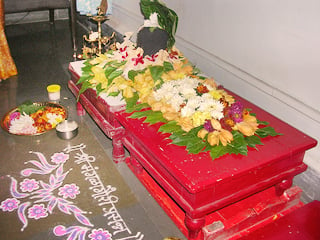 1. Vrats of the month of Shravan

The presiding Deity to be worshipped for the vrat of Shravan Monday is Lord Shiva.

Fasting associated with the vrat of Shravan Monday: On this day if possible, ‘nirahar’ fasting is observed. Nirahar fasting means the fasting observed only by drinking water when necessary during the day. Some people observe ‘nakta’ vrat. The period of three ghatika, that is, 72 minutes after the sunset or up to the sight of an asterism is called ‘naktakal’. The person who observes vrat does not consume anything during the day and takes food in this ‘naktakal’.

Some religious actions performed on Shravan Monday: At some holy places the Shiva devotees perform a Kavar journey either on any one Monday or on every Monday of the month as per their ability and offer the water carried in the Kavar on the Shiva pindi. This journey is performed on foot without using footwear.

This vrat is concluded on the fourth Monday of Shravan when at some holy places meals are offered to people. By observing this vrat, Lord Shiva is apeased and the devotee gets Shiva-sayujya mukti, which means he attains oneness with Lord Shiva. Combining with this vrat, some women observe one more sub-vrat on every Monday and it is Shivamushti vrat.

Following ingredients are necessary for ritual of vrat: Copper platter, a metal glass, a small copper kalash (metal pot) called achamani; sandalwood paste to offer to Shiva, white unbroken rice-grains, white flowers and bel leaves; a lamp with a wick, incense stick, camphor, an implement to light camphor-arti, a match-box for lighting a lamp of arti, washed rice to offer to Shiva as per the day, white sesame seeds, green gram or wheat, milk for offering as naivedya, a folded betel leaf or two betel leaves and a betel nut and some coins for offering to the priest.

Subtle effect of the vrat

One should perform worship in this manner on every Shravan Monday by offering a specific grain on the Shiva pindi.

This fruit bestowing vrat is associated with Lord Shiva. In this vrat, fast is observed serially for sixteen Mondays and on the seventeenth Monday the vrat is concluded. This vrat is observed without having even water. The one’s for which this is not possible, sweet dish (halwa) or kheer made from grounded wheat, jaggery and ghee can be had once. All the desires of a person observing this vrat are fulfilled.

This vrat is associated with the deity is Mangalagouri. After marriage the married women observe this vrat for the first five years of their marriage. This vrat is observed on every Tuesday of the month of Shravan.

In this vrat, sixteen step (Shodoshopchar) worship is done of the idols of Lord Shiva and Ganapati along with Mangalagouri. The essence of staying awake at night is also elucidated in this vrat. This vrat is concluded in the fifth year. In this vrat, apart from the items associated with marriage status, a saree and blouse, sweets (laddoo) and fruits are put in a shelving dish and offered to the mother in Upanayan. By observing the Mangalagouri vrat with utmost devotion: