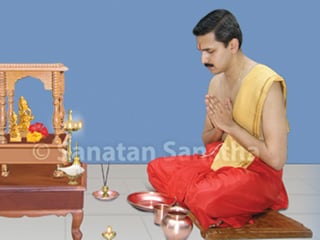 Sovale is a silk dhoti which is mostly worn during ritualistic worship, religious functions etc. It is available in many colours such as red, yellow, saffron. A yellow sovale is known as pitambar. 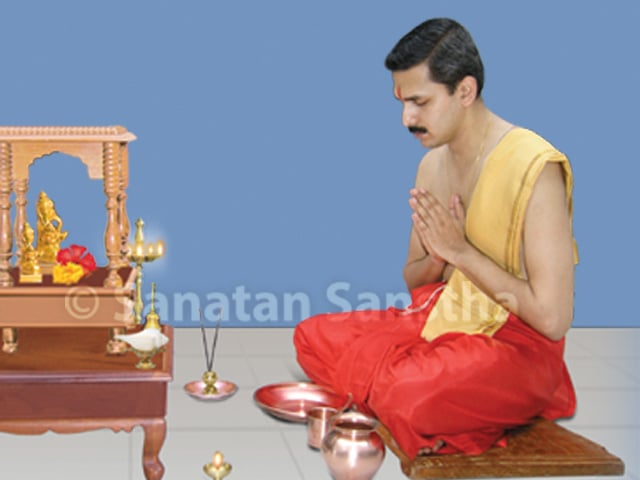 In Hindu Dharma, men traditionally wear sovale during ritualistic worship of Deities, religious rituals, vrats (Vowed religious observances), festivals and various auspicious occasions. The Principles of Deities, sattvikta and Chaitanya are imbibed and sustained in greater proportion in a silk cloth. Besides, all these are also emitted into environment, from which the worshipper benefits. It helps him develop and preserve his bhav (Spiritual emotion) towards the Deity.

3. Wearing sovale during religious ceremonies such as marriage 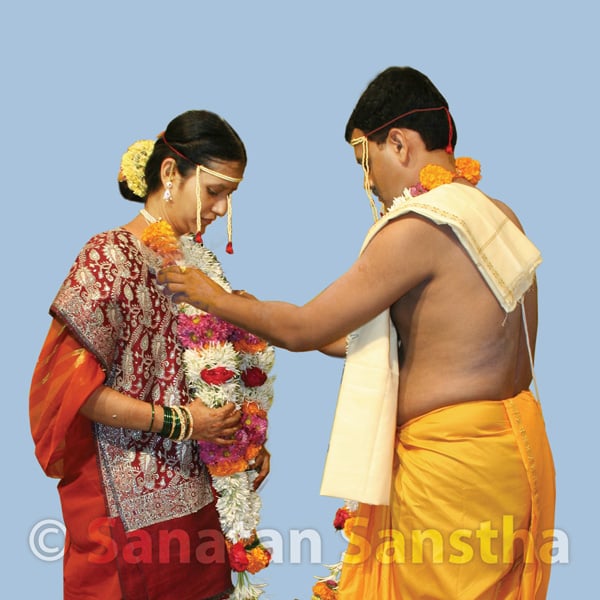 An individual should not wear Raja-Tama-predominant clothes such as coat and tie, pant and shirt (even though they look attractive) if he wants his body, mind and intellect to obtain maximum benefit from the mantras being recited during religious ceremonies such as marriage. Religious sanskars (Subconscious impressions) will not be impressed effectively on the mind due to the clothes that cannot be tucked at the back. Hence, during religious occasions a sovale must be worn.

4. Use of sovale while cooking and during meals

Sovale is worn like a dhoti using the ‘Shatakachha’ method, that is, tucking it at six places. At some places, it is worn by tying a knot near the navel or by tucking it at five places.

5A. A sovale that is tucked at five places and is associated with the Panchamahabhutas (The five Cosmic Principles)

On Shravan Krushna 8, Kaliyug Varsh 5110 (23.8.2008), Shrikrushna Janmashṭami (Day of Shrikrushna’s birth) was being celebrated in Sanatan’s Ashram at Miraj. I was allotted the seva (Service unto the Absolute Truth, that is, God Principle) of performing evening arati (A ritual of waving a lit lamp in front of a Deity and Saints, accompanied by singing of hymns). Usually, while performing arati my mind is not focused on the Arati, but wanders. That day, I had worn a sovale while performing arati. I felt that my mind would not wander that day. Outwardly, I could perceive that the negative energies were attacking me, but I could experience that the sovale had formed a protective sheath around me. Therefore, I was not at all affected. That day, when the lullaby for Shrikrushna was being sung, I perceived that the cradle was actually rocking. 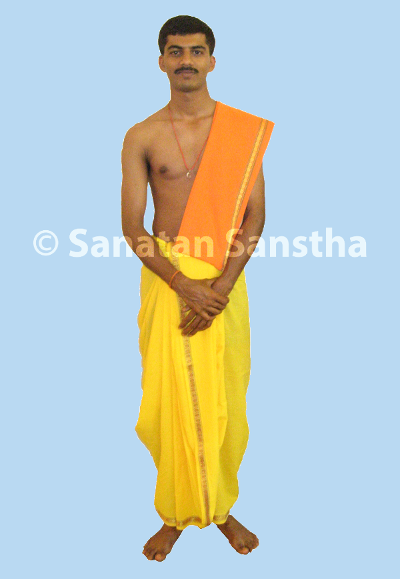 During auspicious occasions such as puja (Ritualistic worship), abhishek (Consecration by ritualistic bathing with water, milk, etc.), marriage, it is customary for men to wear a sovale and an uparne on their left shoulder. The uparne on the shoulder should have a fold in the front, tassels at the back and the border should be towards the outer side.

7A. Although a circular protective sheath formed around the body of men when uparne is used during puja, abhishek, etc. protects them from negative energy distress, benefit to a greater extent is at the emotional level

7A 1. Upon wearing uparne or shawl over our shoulders while performing puja, abhishek, etc. the waves of Shakti (Divine Energy) emitting from the Deity are in a way restricted. Due to this restriction, an individual that performs the worship is not distressed by the flow of Shakti that emanates from the Deity.

(Since the spiritual level of common man is low, he is not capable of sustaining the powerful waves of Shakti emitted by the Deity. Due to these waves, the individual can face distress such as heaviness of the head, generation of heat in the body, pain in the eyes, etc. An individual with a high spiritual level is not distressed in the above mentioned manner. – Compiler)

Compiler : Nowadays, no one has enough bhav during worship. Consequently, the flow of Shakti from the Deity is also less, and as a result, there is no question of the individual getting distressed by the flow of Shakti. Whatever little Shakti is obtained due to little bhav is blocked by the uparne or shawl worn over the shoulders. Considering these points, we would like to know about the use of an uparne or shawl during worship.

Shri Gurutattva : This is an attempt at the emotional level by the individual in Kaliyug to retain their modesty.