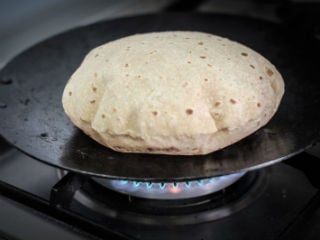 In the beginning, pray to Shri Annapurnadevi , Jaladevata (Deity of water) and Agnidevata (Deity of fire) that, ‘O’ Deities ! You alone are going to get this seva of cooking performed through me. Let the doership of this seva lie with you’. Then begin cooking with a calm mind. Such prayers should be made in-between according to the type of action; for example, while cooking a chapati (An unleavened flatbread from South Asia) and putting salt and spices in the vegetables and curry. Any action while cooking should be performed by mentally telling God or asking Him. This helps maintain our communion with God, we get Anand (Bliss) while performing seva and the cooking is completed within a short time. Express gratitude after cooking.

Let us see the precautions required to be taken while the food is actually being cooked.

1 . Precautions required at the physical level

A. The harmful effects of playing a radio

tape-recorder & television set in and around the kitchen

A radio, tape-recorder and television set played in and around the kitchen emit high velocity frictional vibrations that act on the food through the medium of the Tejtattva and destroy the nutritious factors in the food. Therefore, the individual gets food, deprived of nutrition.

B. Do not make any sound of the utensils

The loud sounds of the utensils while cooking generate distressing waves that strike the food and destroy its vitality.

If the oil is burned out of proportion during cooking, carbon component is generated which makes the food Tama-predominant.

D. Conducts to be observed while preparing and cooking a chapati

1. Roll the chapati in a round shape with uniform thickness. This congregates the vibrations of Shakti that are stored in it equally in all directions and hence, sattvik vibrations are emitted by the chapati.

2. Most of the oil put on the tawa (Pan) gets burnt due to which the carbohydrates in the chapati get destroyed and the chapati becomes conducive for attracting distressing vibrations.

E. Cook the food on a low and if necessary, on a medium flame

Cook the food on a low and if necessary, on a medium flame, because a strong flame rapidly passes on polluted vibrations to the food with the help of the Tejtattva. This destroys the subtle sattvik fragrant waves emitted by the food.

F. Walk slowly in the kitchen

While in the kitchen do not stamp your feet, do not perform unnecessary gestures of hands or feet and do not eat any other item while the food is being cooked. This is because such actions reduce concentration while cooking the food, thereby making it impossible to impart momentum to the Sattva-predominant energy in the food. Stamping the feet activates distressing vibrations from below the earth, thus making the process of cooking a Tama-predominant act.

2. Precautions required at the psychological level

1. Due to the emotions in the unnecessary talk or discussions, unwanted gases are emitted into the environment through the mouth, which destroy the essential juices in the food components, and subtly contaminates it with Raja–Tama-predominant gas.

2. An individual who eats such a food becomes depressed, because such waves affect the mind negatively. It reduces the strength of the mind, and the individual loses sharpness in thoughts underlying an act.

B. Do not curse while preparing food

The food prepared while cursing is negatively affected with the striking vibrations charged with Tej and such an individual has a wicked character.

C. Do not get trapped in desire for food

While cooking, if waves of our desires are transferred to the food, it becomes difficult for others to digest it, because in such a food, desire oriented inertia-laden waves congregate. Such food then causes ailments such as loose motions, pain in the abdomen, bloating of the abdomen etc. This only is called ‘food affected by the evil-eye’.

D. Do not have hatred for others

The Tama-predominant waves of hatred for others while cooking food destroys the subtle Sattva particles in the food. Therefore, the possibility of transfer of feeling of hatred in the individual who eats such a food increases.

When food is prepared in an angry mood, there is likelihood of nutritious components in food getting destroyed due to speedy distressing vibrations created out of Tejtattva.

3. Precautions required at the spiritual level

A. Purification of the kitchen

Kitchen should always be in a purified state. In the earlier times, the floor of the kitchen used to be smeared with cow-dung but now such a floor is not possible to make (particularly in towns and cities). Therefore, the floor should be purified with measures such as blowing vibhuti (Sacred ash), sprinkling water mixed with vibhuti, waving an incense-stick, waving dhoop (Frankincense) etc. These measures destroy or eliminate the distressing vibrations that may be present. Since the floor becomes sattvik, the waves related to positive energies moving in the kitchen affect the food positively.

B. Purifying oneself means cooking food by maintaining its purity

An individual who cooks the food should be sattvik. He/she should enter the kitchen only after a bath; because if he/she is diseased or impure, subtle-waves emanating from his/her mind create a covering around the food and the food has a sheath of impurity around itself. If this sheath is transferred to the body of the individual who eats it, all his organs will be affected by the Tama component of such food. This will reduce the functional capacity of the organs.

Chanting while cooking the food creates the sanskar of sattvikta of the chant on the food, thereby destroying the subtle Raja–Tama particles in it. This makes the food rich in Chaitanya.