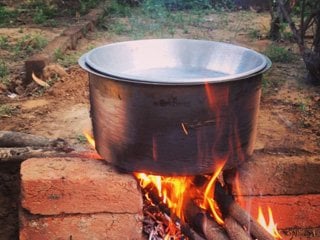 Various types of fuels are used in the kitchen to cook food. Like – coal, wood, kerosene, petroleum gas. In this article today we will see the special characteristics of these fuels and how these fuels work.

Fire in wood is called ‘Pradipta Agni’. This fire is natural and hence, the subtle Tej-imparting waves emitted by it can easily disintegrate the subtle Raja–Tama predominant particles. The subtle-heat that contains fire in the wood is constantly in an awakened state on the strength of its waves of the subtle-air and hence, this fire is called ‘Pradipta Agni’. This fire has greater capacity to emit Tej and transfer it to other components than any other fire type.

1. Disintegration of Raja–Tama-predominant gas with the help of jatharagni (Subtle-fire in the stomach) during the passage of food to the stomach : Fire generated from wood is rich in the Raja component. Therefore, when food is cooked on a chulha that is plastered with mud, the subtle-Tej is transferred to the food items kept on the Chulha.This subtle-energy containing fire awakens jatharagni when the ingested food reaches the stomach and thereby, keeps its Raja component active at the subtle-level. Thus, the subtle Raja–Tama-predominant gas is disintegrated with the help of jatharagni while the food is on its way to stomach.

2. Disintegration of Raja–Tama-predominant energy generated by the frictional movements of intestines : The subtle-effect of fire in the wood on the food also activates the panchapran at the navel. These then cause disintegration of Raja–Tama predominant energy generated by the friction caused due to movements of intestines and thus, the body remains free from gas-related ailments generated during digestion of food.

Coal is rich in carbon and has negligible pradipta Agni. Hence, it is considered Tama–Raja-predominant fire. The subtle carbon waves transmitted to the food cooked on a coal stove have an adverse effect on the digestive process, and the nutrients in food are adversely affected to some extent. When such food contaminated with subtle-gas containing carbon is eaten, the subtle-gas congregates along the inner lining of the food pipe, and the individual suffers from ailments of the food pipe and cancer.

Since kerosene is an inflammable substance, it has Tama-predominant gas in a congregated state. Therefore, the food cooked using kerosene as a fuel shows deficiencies mentioned ahead.

1. Food that lacks nutrients : This gas directly affects the subtle-voids containing nutrients that are conducive for the growth and development of the body and reduces their function, meaning, it suddenly contracts them. As a result, the food cooked using kerosene as fuel is devoid of nutrients. Instead of making the body healthy, such food makes it Raja–Tama-predominant.

used for cooking (Most Tama-predominant)

LPG causes maximum pollution at the level of the Tama component in the environment, and it causes sound pollution in the food that is extremely dangerous for health.

A. The process of generation of harmful sound-vibrations

1. Distressing sound-vibrations getting transferred to the food and discharged in the premises : LPG is stored in a cylinder in a liquefied form under very high pressure. Due to the high level of compression, it produces a strange subtle-sound within the cylinder. When food is cooked using this liquefied gas, the distressing sound-vibrations are transferred to the food and are also speedily discharged in the premises in equal proportion.

3. Destruction of body cells : Due to the subtle Raja–Tama predominant vibrations in the form of sound transferred to the food cooked on LPG (Liquid Petroleum Gas), the subtle-nutrient containing voids conducive for growth of the body are completely destroyed. A Raja–Tama-predominant energy is generated through their disintegration. Over a period, this energy is responsible for the destruction of other cells in the body.

In the earlier times, the floor used to be smeared with cow-dung, and cooking would begin only after ritualistic worship of the chulha and offering oblations of rice grains or husked rice in the kindled fire. This would then attract Divine vibrations from the environment towards the food. Such food used to be beneficial at the physical, mental and spiritual levels, and that is why the food used to be called ‘purnabrahaman’- a complete form of Divinity.’ – H.H. [Mrs] Anjali Gadgil