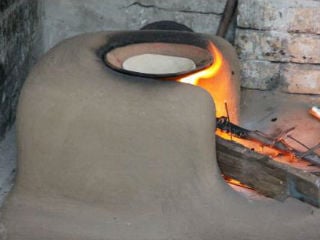 In the earlier times, women would sit near a chulha (An indigenous stove that uses firewood) to prepare food. The contact with the fire that was kindled in the chulha would purify their body.

1. Benefits of cooking on a chulha

A. The regular process of cooking on a chulha purifies the place and enhances the Sattva component in that place. This makes that place more sattvik and pure.

B. The food cooked on a chulha is least affected by the attacks of negative energies.

C. A protective sheath is created around the food and the utensils used in cooking when the food is cooked on a chulha. The burning of wood and its fire attracts inferior Deity Principle and some positive energies in that environment.

E. When food is cooked on a chulha, a Sattva-predominant environment is created there. Therefore, any individual who enters there gets the benefit of that environment. Since the environment undergoes constant purification due to the chulha, the distress due to negative energies is less when compared with other places. Therefore, one feels calm and stable there. This also helps the individual who moves around there to remain in a pleasant mood.

2. Benefits to the individual who cooks food on the chulha

B. The point of light later gave rise to a larger light that spread to the backbone of that individual and then extended to his entire head. As a result, white spherical rings were seen revolving over the head and back.

C. I also perceived that this process purified the subtle-bodies of the individual.

3. Benefits of consuming the food cooked on a chulha

A. The food cooked on a chulha attracts God Principle to a greater extent, thus enhancing the Sattva component in the individual who eats it. As a result, he obtains physical as well as psychological benefits from the health perspective.

B. Since the food cooked on a chulha comes in contact with Divine qualities, it becomes tastier. Therefore, it satisfies the individual who eats it.

4. In Udupi (Karnataka, Bharat), food is cooked only on chulhas

‘In Udupi, food is cooked in a traditional manner in the kitchens. Cooking for a large number of people is done on chulhas without using electricity or LPG cylinders.’ – Mr Abhijeet Kharat

5. Why should live coals not be immediately extinguished with water ?

‘The fire in live coals represents the Shiva Principle, while the Adi-shakti (Divine Energy) Principle in the form of Annapurnadevi is active as the energy needed for cooking. Thus, fire in the Shiva form as well as Annapurnadevi in energy form work together to convert food into food containing the God Principle. Immediate extinguishing of live coals with water after the process of cooking amounts to destroying the manifest waves of Agnitattva (Absolute Fire Principle). Therefore, instead of doing so, one should offer Naivedya to the waves of Agnitattva and Annapurnadevi, praying to them to calm down, and then sprinkle a little water on the live coals. The fire calms down even with the slight sprinkling of water after praying.’