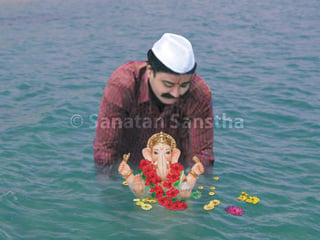 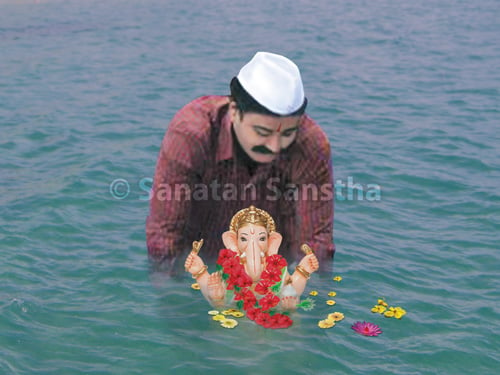 As per the science of Spirituality, the divinity generated in the Idol consecrated on the day of Ganesh Chaturthi lasts only for a day. That is why the Idol should be immersed in water that very day or the next day, after performing ritualistic worship.

This puja (Ritualistic worship) should be performed before immersing the Ganapati Idol in flowing water.

(Variation : Haldi and kumkum are offered along with the gandha.)

Thereafter, Arati should be performed and the worship concluded by offering mantrapushpanjali. Everyone should offer akshata onto Shri Ganapati’s hand and move the Idol a little with the right hand.

The aim is that the performer of the puja should get endowed with Ganapati waves to the maximum. The concluding uttarpuja is the final step in augmenting the absorption of these waves. During the uttarpuja, all the pavitraks leave the Idol at once. After performing this puja, the Idol is slightly shifted from its place. Due to this, the remaining pavitraks leave the Idol, and hence, the performer of the puja can be their recipient.

After the uttarpuja, the Idol is immersed in flowing water. When taking the Ganapati Idol for immersion, we should also offer curd, puffed rice, coconut, modak etc. as provision for the journey. Arati should be performed once again beside the reservoir of water intended for immersion and then the Idol immersed along with the provisions into the flowing water. After immersion, it is customary to bring home some earth from the place of immersion and sprinkle it around the house.

An important point regarding the immersion of Shri Ganesh Idol is that the divinity infused in the mud Idol by consecration cannot remain in it beyond one day. This means, that no matter when the Ganesh Idol is immersed, the divinity in it is already lost on the second day. Hence, it is most appropriate in all aspects to immerse the Idol of any Deity on that very day or the next after performing uttarpuja. If soyar or sutak is being observed in the family, get the vrat (Vowed religious observance) of Shri Ganesh Chaturthi performed by a priest. Similarly, immersion of the Idol on the decided day itself without waiting for an event such as a delivery etc. to occur in the family is approved by the scriptures.

It is said above that, ‘The divinity generated in the Idol because of Pranapatishṭha (Consecration) cannot last more than a day’. One might ask that if this is so, how will devotees benefit from a twentyone-day worship of Shri Ganesh Idol during the Ganesh festival. The answer is – Though the divinity in the Idol is destroyed, the Chaitanya (Divine consciousness) remains in the Idol for 21 days. Again, since the Idol is ritualistically worshipped during the Ganesh festival, the Chaitanya in the Idol can increase as per the intensity of bhav (Spiritual emotion) of the devotees.

Reason for immersing the Idol in flowing water

Due to Chaitanya in Idols of Shri Ganapati on immersion it purifies the water. With the flowing water, this Chaitanya reaches far and wide and many people benefit from them. This water evaporates, too; hence, it makes the atmosphere sattvik (Sattva-predominant).

It has been observed that the workers of anti-Hindu organisations collect the Idols and throw them in stone quarries. This is how they dispose of the objects of our faith. Why should we allow such an insult of Dharma (Righteousness) ?

B. How to immerse an Idol in critical circumstances ? : Certain regions do not have reservoirs with enough water for immersion. At some other places, all the sources of water are polluted, making them unsuitable for immersion of the Idol. Likewise, because of a famine or a calamity in a place, Idol immersion may not be possible. Such a situation can be tackled in the following two ways :