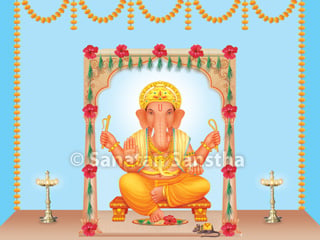 Anything which is in consonance with the scriptures proves to be ideal and beneficial. If the Idol of Shri Ganesh is sculpted as per the science behind the Idol, then those worshipping it are benefited. Unfortunately today, Idols are worshipped in various forms and shapes based on one’s liking and imagination without taking into account the science behind the Idol. This is resulting in the denigration of Shri Ganesh. Hindu festivals are not just for social gathering, but for faster spiritual progress (to attain God’s grace). Therefore one should stop evils from entering into the festival.

Buva replied, “Start worshipping Shri Ganapati’s Idol; all your objectives will be met.”

Lokmanya Tilak said, “Performing such worship alone will not suffice. Everyone in the country should perform this worship. In Maharashtra, we have a tradition of worshipping Shri Ganapati’s Idol on Bhadrapad Shukla Chaturthi since the ancient times. Let us now start it throughout the country. This is how the public celebration of Shri Ganesh festival started with the inspiration from Lokamanya !

1. Evils in the festival

Present day Ganesh festival celebrations are devoid of devotion. In a survey conducted in 1999, it was found that there were more than 3500 Ganesh festival committees registered in Mumbai alone! What would be their number all over Maharashtra?

The festival committees spend huge sums for erecting the pandal, the Idol, lighting, decoration, scenery, entertainment programs and processions. Right from a volunteer of the festival committee to the police of the entire state and even coast guards along the seashore are on their toes during these celebrations. Unfortunately, the spiritual benefit derived by the society from this festival is comparatively negligible. Following are the commonly found evils during the festival celebrations :

A. Malpractices related to pandal

B. Idols in an unscientific form

For example, showing Shri Ganesh as ‘one who applies a balm’ or one ‘who rides a scooter’ etc. Advertisements of addictive substances.

D. Organizing programs that have adverse effect on the mind of the people

Lack of programs on Righteousness or Nation building.

Demanding and pressurizing donors to donate is tantamount to organized extortion. People with illegal money, manufacturers of liquor or tobacco try to earn punya (Merits) and reputation by offering huge donations. Cigarette and tobacco manufacturers advertise their products during the festival. A festival celebrated with such ill-earned wealth will never appease Shri Ganesh.

2. How to celebrate festival in an ideal manner?

One should ensure discipline and sanctity at the venue of worship and the pandal. Workers should be dedicated, service-oriented who understand the spiritual meaning of religious rituals as well as the Deities and who assist in the celebrations with an attitude of service unto the Absolute Truth.

Programs on social upliftment, rekindling Dharma (Righteousness) and national awakening should be arranged for the benefit of attendees. For e.g.

As Ganesh Festival is a religious festival it is necessary that the religious organizations take the responsibility to stop the malpractices and celebrate it in accordance to the science of spirituality. For this HJS (Hindu Janajagruti Samiti) is conducting campaigns for the last six years. As part of the campaign, the Ganesh Idol makers and the organisers are contacted and educated on this matter, Why should Ganesh Idol not be tall, Idol in the form of Saint, other Gods or Idols of strange and distorted form not be made, Idols not be made of glass, coconut, Plaster of Paris or of fiber instead be made of clay, why to use natural colours while painting the Idol, immersion of the Idol in flowing water instead of donating it, the science behind it and the spiritual benefits on account of this is the information given and education conducted.

At some of the places in the state, by meeting the Ganeshotsav mandals, through the programs organized by the police and the Mohalla committee education is conducted by placing the points of code of conduct prepared by HJS about what things should be there and what things should not be there is Ganeshotsav. Included in this are the education about problems in the procession, unwanted wastage of money on electrification, noise pollution, immersion and the programs being held during the festival. So also the stand of not bursting crackers with pictures of God and National figures is placed and education done. For education in the Ganesh Idol workshops and in public places through the medium of posters, banners or an exhibition, distribution of handbills, and at many places through lectures or VCDs, education is undertaken.

A. How to please Shri Ganesh & invoke His blessings

In ancient days, the rituals performed with bhav (Spiritual emotion) and the science behind them were the main part of the festival rather than external decoration. Unfortunately today, this aspect is overlooked while celebrating religious festivals. The Idol should assimilate the Ganesh principle. A few years ago, in Kolhapur, Maharashta and Margao, Goa, the Ganesh Idols worshipped in the public celebrations were in the form of Saints, Swami Samarth of Akkalkot and Shree Saibaba of Shirdi respectively. In Kalyan, Mumbai, Shri Ganesh’s Idol was created from medical appliances. The trunk was made from syringes, the ears from kidney trays, the crown from saline bottles, the hands from gloves and the eyes from capsules.

According to the Science of Spirituality, every deity represents a specific principle. According to the doctrine of Spirituality, sound, touch, form, taste, odour and energy co-exist. Thus, the form of the deity should be such that it is able to attract maximum frequencies of the deity that is worshipped. If this doctrine is not followed while making the Idol, the frequencies of the deity do not assimilate in the Idol, and the worshipper is not benefited by its ritualistic worship. According to the science of Idols, an Idol of Ganapati should have one tooth and four arms. The three hands should hold a noose, a goad and a tooth respectively and the fourth should be in a posture endowing blessings. The belly should be large and the flag should adorn a symbol of a mouse on it. The ears of the Idol should be like sifting pans, and the deity should be seated on a wooden seat with a crown on the head.

B. Losses caused by giving a social form to a religious festival

The Ganesh festival today, even though being a religious one, has proved detrimental to both Dharma and society. Many people desire that the sanctity of a religious festival should be preserved. Rituals like Arati, puja, making offerings to the deity, paying obeisance to Shri Ganesh, listening to kirtans and discourses should acquire a significant position in the celebrations. Funds accumulated should be utilised for the spread of Spirituality.

Some examples of propagation of Spirituality are as follows –

C. Has your local festival achieved this aim?

A religious festival is a religious ritual celebrated collectively in the society to provide rest to the body and happiness to the mind, especially social happiness. One should be able to experience happiness from nature and fine arts through such festivals and help man to go beyond self (self-centeredness) and blend with society at least to some extent. Religious festivals unite people who normally do not come together in their day-to-day life, setting aside all discriminations – of financial status, caste and class, literacy, etc. Make this Ganeshotsav a time to unite and be righteous!

Note : Commentry is in Marathi.
Description : Why Ganesh festival is celebrated publicly? Other topics – Malpractices during Ganesh Festival like money demanded with force for Ganesh festival. Saints guidance on present state of festival.