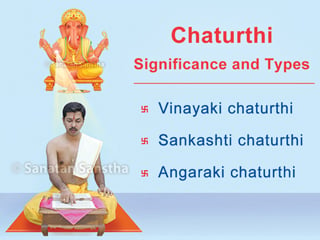 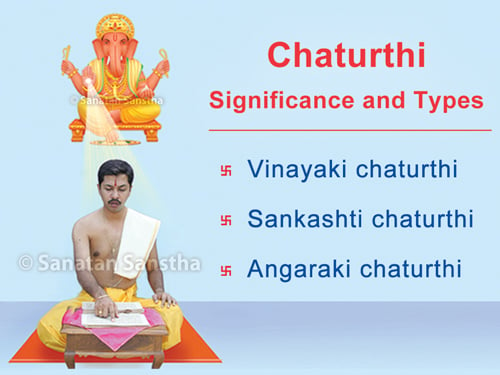 The day on which the Ganesh waves descended on earth for the first time is the day on which Shri Ganapati was born, that is, Magh Shukla Chaturthi. Since then, an association between Ganesh and Chaturthi was established.

The tithi (A lunar day) of Magh Shukla Chaturthi is celebrated as Shri Ganesh Jayanti. Significance of this tithi is that Shri Ganesh Principle is a 1000 times more active on this day when compared with other days.

The following spiritual experience of a seeker should illustrate how the Ganesh Principle is active on this tithi.

B. Chaturthi means a state beyond the states of jagruti (Awakened), swapna (Dreaming) and sushupti (Deep sleep), that is, turyavastha. Reaching chaturthi is the very goal of a seeker.

D. Restriction on viewing the moon : Looking at the moon on this day is prohibited, because the moon happens to be the cause of the mind, meaning, that which encourages the mind to function. A seeker, on the other hand, aims at dissolution of the mind. In the planetary system, the moon is fickle, meaning, it undergoes phases of waxing and waning; likewise, the mind in the physical body is fickle. Seeing the moon increases the fickleness of the mind by 1/1,00,000 times. Only when the mind becomes thoughtless is turyavastha attained. On the day of Sankashṭi, after spending the whole day in performing sadhana (Spiritual practice), the moon is viewed at night. This, in a way, is an indication of the end of the period of sadhana for the day and the mind returning to its involvement in the daily chores.

A story in the Puranas goes thus. Once the moon ridiculed the appearance of Shri Ganapati saying, “How big is your belly, those sifting-pan-like ears, that trunk and those miniature eyes !” Upon hearing this, Shri Ganapati cursed the moon, “Henceforth no one will look at your face. Whosoever does so, will attract the blame of theft.” Sure enough, nobody allowed the moon to come before them. Living in seclusion is impossible. The moon performed austerities, appeased Shri Ganapati and asked for mitigation of the curse. ‘When mitigating a curse, it should not be completely lifted. The curse should also remain in part and its mitigation should also take place. It is not appropriate for me to destroy a curse given entirely by me.’ Thinking thus, Ganapati mitigated the curse by saying to the moon, ‘No one will look at you on the day of Ganesh Chaturthi. However, on Sankashti Chaturthi, no one will have meal without seeing you.’

The Chaturthi of the bright fortnight of each month is called ‘Vinayaki’ and that of the dark fortnight is called ‘Sankashti’.

The ritualistic worship on this day does not include looking at the moon and worshipping it, like on Sankashti. Fast the entire day of Vinayaki, and end it the next day. The Deity of this vrat is Shri Siddhivinayak. Vinayaki is performed for all-round well-being.

Sankashta means sankat (Calamity). The 360 waves, emitting from the core of the earth, surround us. These restrict the flows within the body. This itself is known as a ‘sankat’. In the dark fortnight, these 360 waves are active to a larger extent. This restricts the flow of energy through the vessels in our body. Sankashti is performed to overcome this calamity. Shri Ganapati is the God of the 360 waves; hence, worshipping Him helps avoid this calamity. Fast the whole day. In the evening, after a bath, make preparations for the ritualistic worship of Shri Ganapati. At night, after seeing the moon, either an Idol of Shri Ganapati or a betel nut placed on a mound of akshata, symbolic of Shri Ganapati, should be worshipped with Shoḍashopachar-pūja. Recite the Atharvashirsha twenty-one times. Pay obeisance to the moon after giving an oblation of water and sprinkling gandha (Sandalwood paste), flowers and akshata in its direction. On the day of Chaturthi, the oblation of water should be made in a tamhan (Metal dish). We should eat only after offering Mahanaivedya, which consists of five delicacies. The Deity of this vrat is Shri Vighnavinayak.

The Chaturthi, which falls on a Tuesday is called Angaraki. Angar means the planet Mars or land. Shri Ganapati is the presiding Deity of Mars, as well as the Earth. Both Shri Ganapati and Mars have the same complexion. On the day of Angaraki, Shri Ganapati waves reach the Earth in a larger proportion and those from Mars, too, reach the Earth. Consequently, most of the waves emitting from the moon are destroyed. Hence, the benefit derived by performing Angaraki Vinayaki and Angaraki Sankashti is equivalent to that of performing the Vinayaki and Sankashti throughout the year. Angaraki, unlike other vrats, is not performed throughout the day and night. It is an observance which lasts five prahars, four during the day and one at night. According to the ritual, a meal should be taken at moonrise. Thus, that meal becomes a part of the ritual and is not partaken to conclude the fast.

3. Relative importance of the types of celebration methods