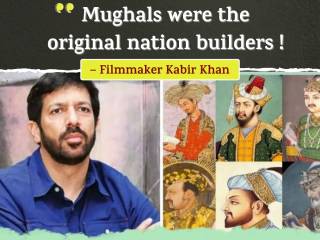 In the last week, after the Taliban taking over control of Afghanistan, news on the oppression of the people of Afghanistan and their struggle to run away from the country are coming forth. The modern media are bringing forth the truth of incidents from forcibly searching for and taking away 12-year-old girls to killings of reporters and citizens. We had seen in their last invasion, how the Talibanis destroyed ancient Buddha idols at Bamiyan. Now, in the modern era, if such persecution is observed with the minorities and religious places of other Sects, then it is better not to think of the severe oppression by the Mughal invaders about 700-800 years ago during their attacks on India! Certain faction is, however, always trying to suppress this truth, and attempts are made to treat Tipu Sultan as a patriot and Aurangzeb as a ‘Sufi Saint. Bollywood of India is always leading in this matter. Without feeling any concern over the killings of Indian soldiers by Pakistan, Pakistani artists are brought here and given work by fabricating stories of harmony among the two countries.

There is a web series titled ‘the Empire’ presently being shown glorifying Babar when another Bollywood director Kabir Khan has gone a step further by showing the Mughals as the true ‘nation builders’. He said that he found it troublesome to show the Mughals and Muslim rulers as villains. If the Mughal invaders were ‘nation builders’, who were the Hindu kings ruling over India from Prabhu Shriram to Chhatrapati Shivaji Maharaj, is a question. Who looted Somnath Mandir 17 times and Jagannath Mandir 18 times? Who destroyed the huge Hindu temples at Ayodhya-Mathura-Kashi? Who persecuted Sikh Gurus and killed them? Hindu pundits, who were oppressed and displaced from Kashmir 30 years ago, have not been able to return to Kashmir. Hindu Janajagruti Samiti (HJS) has, therefore, advised Kabir Khan to migrate to Afghanistan where there is total Islamic rule under Shariat, instead of making false propaganda of feeling helpless and insecure to live in India.

It is a ploy to support the Taliban by covering up the true oppressive history of Mughal invaders. In fact, there is a description of the barbaric ways of invaders in their history books like Akhbar, etc. The orders issued by the cruel Muslim invaders to forcibly convert Hindus; destroy Hindu temples, use Hindu women as slaves, etc are available even today; therefore, instead of showing the truth and those invaders as villains, expressing remorse over such depiction is quite surprising. Tyrant Aurangzeb, who killed his brother Dara Shikoh, ruthlessly persecuted Sambhaji Maharaj before killing him, was he the ‘nation builder’?

Hindu Janajagruti Samiti has appealed to Hindus to boycott all forthcoming films of Kabir Khan for his supporting Talibani ideology and even the ‘Disney-Hotstar’ for showing the web series like ‘the Empire’ glorifying tyrant Babar.

Special online webinar on ‘The Empire : Glorification of barbaric Mughals’

Hindus should boycott the films and their sponsors for glorifying the barbaric Mughal invaders – Advocate Subhash Jha, Supreme Court

Bollywood people are afraid of making films on seats of worship of the Muslims because they are scared of facing strong opposition or even death. If they realise that Hindus might harm them if their seats of worship were attacked, they would stop making films against Hindus. All Hindus should, however, unite and boycott such films and all products manufactured by the sponsors of these films. They should be strongly opposed; only in that case, Bollywood would take notice of the same. Hindus must keep on trying and educate other Hindus in this regard, stated the Supreme Court advocate Subhash Jha, while speaking in an online special discussions program held by Hindu Janajagruti Samiti (HJS) on the topic of ‘The Empire: Glorification of barbaric Islamic invaders’

Mr Neeraj Atri, the executive President of ‘Vivekananda Karya samiti’ said that a web series is shown at the time when construction of Ram Mandir has started. It is not a coincidence but it is a conspiracy, Earlier, people used to forcefully convert others using their swords. Now, modern techniques like web series are used for this purpose. We should also give an apt reply to their false propaganda in their language by doing our homework properly. Only then, Muslim directors like Kabir Khan would not dare to openly say that Mughals were the nation builders. There are people of jihadi and communist mentalities in central education institutes, censor board and many such places. We need to have Hindutva based politics as advised by Swatantryaveer Savarkar so that people will know the truth.

Sanatan Sanstha’s ‘Dharmapracharak’ Abhay Vartak said that Islamic invaders have been glorified in films right from ‘Mughal-e-Azam’ to ‘the Empire’. Earlier, there were people who were tilted towards the Mughals and even now, they are alive. Babar, who demolished several Hindu temples including Ram Mandir, was a descendent of Taimur Lang. He was not a human being but a beastly animal. Today, an actor like Saif Ali khan is naming his son after Taimur which shows his mentality. Taliban can attack India in future. At such time, web series like ‘the Empire’ is shown to motivate people supporting the Talibanis in India.

Mr Anand Jakhotia, State Coordinator of Hindu Janajagruti Samiti for Madhya Pradesh and Rajasthan said that when five main gangs were active in India like Karim Lala, Dawood etc, in all films a don always used to be shown as a Hindu; means Hindus were shown as criminals A character played by Amitabh Bacchan like ‘Vijay’, doesn’t go to temples; but he is Saved by a badge of ‘786’. The same mentality is present even now in Bollywood.

OTT platform Disney Hotstar released a web series named ‘The Empire’ on 27 August, which is based on Islamic invader Babur. He was one of the most cruel and brutal Islamic invaders, who plundered wealth of India, destroyed innumerable number of Hindu temples and killed countless Hindus. Devout Hindus protested against the glorification of Babur through the said web series. Hotstar has rejected grievance complaints against its series ‘The Empire’ on Babur which dramatises the Mughal invader, claiming that it is based on an adaptation of a novel, Empire of the Moghul – Raiders from the North, written by one Alex Rutherford which fictionalised historical events.

This has created uproar among Hindus and they took to Twitter to raise their protest. Hindu netizens started tweeting with hashtag #BanTheEmpireSeries which became one of the top national trends on Twitter in India. The trend was on 2nd spot for some time and was in top 10 for several hours. More than 40,000 tweets were tweeted using the said hashtag.

It was the academics including the NCERT who glorified the Mughals, followed by the Bollywood gang !

And now OTT platforms are trying to set the narrative !

Shame on Disney + HotStar to glorify such barbarians !#BanTheEmpireSeries pic.twitter.com/u1cpELuvTg