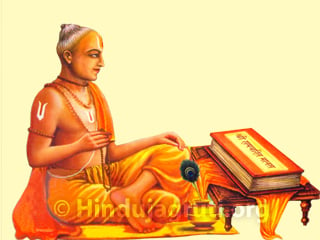 Hindu Dharma has a glorious past of great Saints and Sages. Several Saints ascended to the state of Guru and showed the path of God realisation to many. They also taught spirituality to the society through their conduct and actions. Their mission was not just limited to spirituality but they also did substantial work for the defence of nation whenever it was in difficulties. Some of the Saints traveled all over the world and disseminated the spiritual knowledge of Bharat there without any personal expectations. Millions of people abroad are getting benefit of that. For last lakhs of years, the Sages took tremendous efforts to preserve the Vedic Knowledge which is the pride of Bharat. They also created many subjects connected with the human life and made it easy. The most important thing however is that the Saints of Bharat have donated the world the tradition of Guru-disciple.

The current scene however is different. The cricketers, movie heroes and heroines have become the ideals of Hindus. Also the two vices of selfishness and narrow mindedness have become dominant in Hindus which is causing lot of harm to Hindu society. Under such circumstances it has become essential to study and follow the life of Saints who have imparted the teaching of sacrifice, love. devotion to righteousness, devotion to nation, helping the society and kshatradharma ( duty of a warrior). We are hereby publishing the matter related to them so that people should come to know about such great Saints. We pray at the feet of God that let Hindus get the inspiration to study and follow their biography and teachings.

Tulsidas (1532 – 1623) is considered to be one of the greatest of the Hindu saints of India.  He is considered to be one of the most famous representatives of the Bhakti school of Hinduism. Goswami Tulsidas was a great devotee of Shri Ram. He is one of the most familiar saints in India and his version of the epic story of Shri Ram that is called “Shri Raam-charit-manas” is an extremely popular scripture. Shri Raam-charit-manas is a proof of the exalted state of devotion that this saint has achieved and the grace God has showered upon him. It is said that Shri Ram and Shri Lakshmana have appeared to Tulsidas in person on a few occasions. The story of Goswami Tulsidas is highly inspirational to aspirants in the present age; it revives faith in the Divine and proves that God can be attained through pure devotion even in this Kali Yuga.

Tulsidas was born to Hulsi and Atmaram Shukla Dube in Rajpur, Uttar Pradesh, India in 1532. He was a Sarayuparina Brahmin by birth and an incarnation of Sage Valmiki, the author of the Sanskrit Ramayana. At the time of birth, Goswamiji was as healthy as a five-year old boy and instead of crying, He uttered “Ram”. At this moment, Shri Ram did aakaashvaani and named the divine child as “Raambolaa”.

Tulsidas is regarded as an incarnation of the great sage Valmiki. In Bhavishyottar Purana, Shiva tells Parvati how Valmiki got a boon from Hanuman to sing the glories of Shri Ram in vernacular language in the Kali Yuga.

Nabhadas, a contemporary of Tulsidas and a great devotee, also describes Tulsidas as incarnation of Valmiki in his work Bhaktmaal. Even the Ramnandi sect (Tulsidas belonged to this sect) firmly believes that it was Valmiki himself who incarnated as Tulsidas in the Kali Yuga.

From Family Man to Ascetic

Tulsidas’s wife’s name was Buddhimati (Ratnavali). Tulsidas’s son’s name was Tarak. Tulsidas was passionately attached to his wife. He could not bear even a day’s separation from her. One day his wife went to her father’s house without informing her husband. Tulsidas stealthily went to see her at night at his father-in-law’s house. This produced a sense of shame in Buddhimati. She said to Tulsidas, “My body is but a network of flesh and bones. If you would develop for Shri Rama even half the love that you have for my filthy body, you would certainly cross the ocean of Samsara and attain immortality and eternal bliss”. These words pierced the heart of Tulsidas like an arrow. He did not stay there even for a moment. He abandoned home and became an ascetic. He spent fourteen years in visiting the various sacred places of pilgrimage.

Tulsidas used to throw the water that was left in his water-pot at the roots of a tree which a spirit was occupying. The spirit was very much pleased with Tulsidas. The spirit said, “O man! Get a boon from me”. Tulsidas replied, “Let me have Darshan of Shri Ram”. The spirit said, “Go to the Hanuman temple. There Hanuman comes in the guise of a leper to hear the Ramayan as the first hearer and leaves the place last of all. Get hold of him. He will help you”. Accordingly, Tulsidas met Hanuman, and through His grace, had Darshan or vision of Shri Ram.

Tulsidas wrote twelve books. The most famous book is his Ramayan—Raam-charit-manas—in Hindi. He wrote this book under the directions of Hanuman. This Ramayan is read and worshipped with great reverence in every Hindu home in Northern India. It is an inspiring book. It contains sweet couplets in beautiful rhyme. Vinaya Patrika is another important book written by Tulsidas.

Shri Rama Himself  taking the trouble to protect his goods

Some thieves came to Tulsidas’s Ashram to take away his goods. They saw a blue-complexioned guard, with bow and arrow in his hands, keeping watch at the gate. Wherever they moved, the guard followed them. They were frightened. In the morning they asked Tulsidas, “O venerable saint! We saw a young guard with bow and arrow in his hands at the gate of your residence. Who is this man?” Tulsidas remained silent and wept. He came to know that Shri Ram Himself had been taking the trouble to protect his goods. He at once distributed all his wealth among the poor.

Tulsidas absolved a murderer from his sins

One day a murderer came and cried, “For the love of Ram give me alms. I am a murderer”. Tulsi called him to his house, gave him sacred food which had been offered to the Shri and declared that the murderer was purified. The Brahmins of Varanasi reproached Tulsidas and said, “How can the sin of a murderer be absolved? How could you eat with him? If the sacred bull of Siva—Nandi—would eat from the hands of the murderer, then only we would accept that he had been purified”. Then the murderer was taken to the temple and the bull ate from his hands. The Brahmins were put to shame.

Tulsidas once went to Brindavan to visit the temples of Shri Krishna. Seeing the statue of Krishna, he said, “How shall I describe Thy beauty, O Shri! But Tulsi will bow his head only whenYou take up bow and arrow in Your hands”. The Shri revealed Himself before Tulsidas in the form of Shri Ram with bow and arrows.

It is believed that Tulsidas’s blessings once brought the dead husband of a poor woman back to life.  The Moghul emperor at Delhi came to know of the great miracle done by Tulsidas. The emperor asked the saint to perform some miracle. Tulsidas replied, “I have no superhuman power. I know only the name of Ram”. The emperor put Tulsi in prison and said, “I will release you only if you show me a miracle”. Tulsi then prayed to Hanuman. Countless bands of powerful monkeys entered the royal court. The emperor got frightened and said, “O saint, forgive me. I know your greatness now”. He at once released Tulsi from prison.

Tulsi left his mortal body and entered the Abode of Immortality and Eternal Bliss in 1623 A.D. at the age of 91. He was cremated at Asi Ghat by the Ganga in the holy city of Varanasi (Benaras).