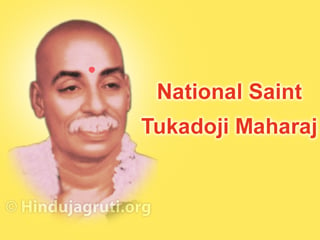 Tukdoji Maharaj was a noble self realised saint. His early life was full of Sadhana both spiritual and yogic exercises. He spent much of his early life in the deep jungles of Ramtek, Salburdi, Ramdhighi and Gondoda.Even though he was formally not much educated, his metaphysical spirit and potentiality was of very high order. His devotional songs permeate full spirit of devotion and moral values. His Khanjedi, traditonal musical instruments was unique and his style of playing it was unparalled. He was bachelor; however, his life was dedicated for the services of the masses irrespective of caste, class, creed or religion.He was all the while absorbed in spiritual pursuits. He critically observed the nature of the people and channelised them for the cause of their upliftment.He had self realised vision and throughout his life, taught the lessons for the purity of hearts and malice for none.In early life, he used to sing the devotional songs, however, with the passage of time, he impressed the masses that God is not only in Temples, Churches or Masjids, and he is everywhere. His powers have no limits. He advised his followers to follow the path of self realisation. He firmly opposed the priesthood and propagated the eternal values and universal truth.Tukdoji stressed much on the congregational prayer wherein all the people irrespective of their religion, could participate. His prayer system is really unique and matchless in the world. He claimed that his congregational prayer system could be bound to bind the masses in the chain of brotherhood and love.

His Holiness Rashtrasant Tukdoji was born in a remote village, viz. Yawali in Amravati district of Maharashtra (India) on 30th April 1909 in the poverty-ridden family. He completed his primary education at Yawali and Warkhed. In early life, he came in contact with many noble saints. Samartha Adkoji Maharaj showered love on him and graced him with yogic power.

In 1935 Tukdoji organised a Maharudra Yojna on the hills of salburdi where more than three lakhs of people came to participate. After this Yojna, his fame spread far and wide came to be respected throughout Madhya Pradesh. In 1936 he was invited by Mahatma Gandhi to his Sewagram Ashram where stayed a month. Thereafter Tukdoji started mass awakening through cultural and spiritual programmes and plunged ahead long into the national freedom struggled in 1942. Ashti-Chimur freedom-struggle was the result of the clarion call of Rashtrasant Tukdoji. He was arrested at Chandrapur and imprisoned in Nagpur and Raipur jails for 100 days i.e. from 28th August to 2nd December 1942.

Tukdoji after his release from the jail, initiated social reform movements and struggled hard against blind faith, untouchabilty, superstition, cow-slaughter and other social evils, He established his Gurukunj Ashram at Mozari village about 120 Km from Nagpur, where constructive programmes were implemented with active participation of his followers. At the very entrance of the Ashram he inscribed its motto as-
‘Open to all is the temple of ours’
‘Welcome to all from every creed and religion’
‘Welcome to all from home and abroad’
After the dawn of independence, Tukdoji concentrated his full attention to rural reconstruction works and organised many kinds of camps for constructive workers. His activities were impressive and of great national interest. Dr. Rajendrea Prasad, Prasident of India showered love on him respectfully bestowed the honor ‘Rashtrasant’ in one of the great gatherings at Gurukunj Ashram. Thereafter people widely called him ‘Rashtrasant’ with great respect.

On the basis of his experience and insight the Rashtrasant composed ‘Gramgeeta’ wherein he exposed the present realities and gave a new concept of development for rural India. In 1955 he was invited to Japan for World Religions’ Parliament and World Peace Conference. Both the Conferences were inaugurated with the tone of Khanjedi of Rashtrasant Tukdoji with great appreciation from thousands in the audience present in the Conference Hall.

In 1956 Rastrasant Tukdoji oraganised Bharat Sadhu Samaj with the active participations of many heads of sects, creeds and religious institutions. It was the first Organization of all the ascetic orders of India with Tukdoji Maharaj as the first president. During 1956 to 1960. He was invited to many conferences to address or to preside. A few of them can be mentioned as Bharat sevak Samaj Sammelan, Harijan Conference, Sarva Seva Sangh Sammelan, Sarvodaya Sammelan, Vidarbha Literacy Sammelan, All India Vedanta Conference, Ayurveda Sammelan and numerous others. He was one of founder Vice President of Vishwa Hindu Parishad. He was on many fronts for national cause, at the hour Bengal famine (1945), at the time of China war (1962), and aggression of Pakistan (1965), of Koyana earth quake devastation (1962) Rashtrasant went with his mission to help the affected and organised the constructive relief works.

His Literary contribution is also immense and of high order. He has composed both in Hindi and Marathi three thousand Bhajans, two thousand Abhangas, five thousand ovis and contributed more than six hundred articles on religious, social and national aspects and on formal and informal education. Rashtrasant a self illuminating star and a dynamic leader of divert actions. He was well known for many arts and skills. In the spiritual field, he was a great yogi, and in cultural field, he was a treat orator and musician. His personality was unparallel and unique. His personality had many facets and. His teachings are everlasting and useful for the generations to come.

In his last days, he was suffering from cancer. All possible efforts were made to cure the fatal disease, but Rashtrasant left his mortal body on 11th October 1968 at 4.58 p.m. in the Gurukunj Ashram, to rest in eternal peace. His Maha Samadhi is built just in front of his Gurukunj Ashram, which inspires us to follow his path of action and selfless devotion. Let us build our careers and characters on the line of the teachings of His Holiness Rashtrasant Tukdoji Maharaj for our all round development of welfare.