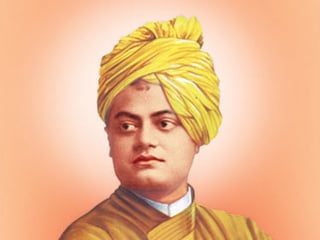 Swami Vivekananda ji’s original name was Narendranath. He was born on 12th January, 1863 at Kolkata (Swamiji’s Jayanti i.e. birth anniversary is celebrated as the ‘International Youth Day’). Right from childhood, two aspects of his behavior could clearly be noticed. One was his devout and compassionate nature and the other was his readiness to perform any act of courage. Since his whole family was spiritually inclined, he received an appropriate religious upbringing.

Swami Vivekananda was admitted to the school founded by Mr. Ishwarchandra Vidyasagar in 1870. While in school he focused both on studies as well as body building. He had great respect for his mother tongue. One such incident was when he had and English language class in school, he said, “I shall not learn the language of the white master.” At least for 7 – 8 months he abstained from learning that language. Later he learnt English owing to compulsion.  Swami Vivekananda stood first in his matriculate examination and added to the glory of his family and school. Then he joined the Presidency College in Kolkata and completed his M.A. in Philosophy.

Meeting his Guru and accepting Sanyas by Swami Vivekananda

Dr. Ramchandra Dutt, a relative of Narendra who had been raised in his house was a disciple of Shri Ramkrishna Paramhansa. He noticed that Narendra was inspired by religious feelings to such an extent that he was contemplating renunciation in his childhood itself. He once told Narendra, “Brother, if your only goal in life is to further the enhancement of our religion, then do not get involved in the Bramho Samaj or others. You go to Dakshineshwari and meet Shri Ramkrishna.” Narendra met Shri Ramkrishna at his neighbor Surendranath’s house itself. Initially for some days Shri Ramkrishna did not allow Narendranath to leave his side even for a moment. He made Narendra sit next to him and gave him much advice & counsel. The two of them would have great discussions when alone.

India was ruled by the British during the period of Swami Vivekananda. Owing to the influence of British education system, their culture, strategies of Christian missionaries misleading people and their literature, the affluent class in Bharat developed inferiority complex feeling that Hindu Dharma and culture is of very low standard, inhuman and barbarian. Many Hindus would have been baptized and adopted Christianity; but there is no doubt that it was curbed due to the fiery propagation of ‘Vedanta’ in other countries by Swami Vivekananda.

Swami Vivekananda represented India and consequently, Hindu Dharma in a world conference was held in Chicago for all religions in the year of 1893. Swami Vivekananda gave a message of spiritual unity to the world in this conference. He also emphasized that along with spiritual progress, materialistic / worldly progress was equally important. Swami Vivekananda’s guidance helped to generate new consciousness and enthusiasm amongst the youth.

Continuous invasions, immorality, looting, oppression of their women and violence had crushed Hindus mentally. Swami Vivekananda undertook the mission of propagating message of Ramakrishna and pulling out Hindus from the depression and defeated mentality generated amongst people. Swami Vivekananda travelled all over India for this great mission and created enthusiasm and patriotism amongst people through his spiritual discourses. Moreover, he made the whole world realize the importance of Hindu Dharma and Hindustan.

Swami Vivekananda shines at the World Parliament of Religions

The premonition regarding the visit to Chicago

Swami Vivekananda was half asleep on one night, he saw a miraculous dream. Shri Ramkrishna’s blazing form was moving ahead over the seas and beckoning Swamiji to follow him.

Swami Vivekananda opened his eyes. His heart was filled with indescribable ecstasy. At the same time he heard very clearly a divine voice saying, “Go”. Then he resolved to go abroad and completed all arrangements within a day or two.

Departure for the World Parliament of Religions

Swami Vivekananda left the Indian shores, aboard the ship, ‘Peninsular’ on 31st May, 1893. He reached Vancouver port in Canada on 15th July. From there he travelled by train to the famous city of Chicago in America. He came to know that a World Parliament of Religions was going to be held on 11th September.

Swami Vivekanananda did not have the Invite required to participate in this conference. Further even the date to register as a Representative had lapsed. Yet, wherever he went people were attracted to him. On the very first day he met Prof. J.H. Wright, who was teaching Greek at Harward University. The two of them conversed for almost four hours. The professor was so impressed by Swami Vivekananda’s talent and intellect that he accepted the responsibility of giving Swamiji admittance to the World Parliament of Religions as a representative.

Swami Vivekananda proved to be a true representative of Hinduism as he made his fervent appeal for tolerance to the whole world from the dais of the World Parliament of Religions at Chicago on 11th September, 1893. It must have been the divine plan to allow this saint to introduce the world to the great Hindu Dharma. This conference was inaugurated with the Chanting of Hymns by the various religious heads. It was a melodious beginning the conference. On the dais, at the centre, was the religious head of the Roman Catholic Sect of America.

Swami Vivekananda had not prepared any written speech. Finally he stood up from his seat having sent a silent prayer to his Guru. He addressed the conference with the words, “Sisters and brothers of America”. These words had such miraculous strength in them that those thousands gathered stood up and there was continuous applause. The emotional appeal in those compassionate words had stirred every heart. It was the first time ever that any orator had referred to the whole of mankind as ‘Sisters and brothers’. Further he entranced all present with his brilliant and powerful oration.

Swami Vivekananda felt that the Hindu Samaj has the potential to become the spiritual teacher to the world. After centuries someone had again shown to the Hindu society its own wide horizons. Yet Swami ji did not criticise any religion. He did not degrade any religion. He only wiped the dirt that had accumulated on the Hindu Dharma owing to its ill-treatment and affronts at the hands of its invaders.

Swami Vivekananda showed Hindu Dharma its own irradiant self and placed it on the highest pedestal of the World Parliament of Religions. When speaking about Hindusthan, he says that it is a sacred land, a land with a divine purpose. Hindusthan is the abode of spirituality and introspection. Right from the ancient ages, founders of religious tenets were born here. They satiated the scorched earth with the cooling waters of the Eternal truth – Sanatan Satya. It’s the only land where one can experience not only tolerance but also affection for other religions.

Swami Vivekananda returned back to Kolkata to a grand welcome after projecting Bharat in its deserved glory. ‘The Plan of my movement’, ’Vedant in everyday life of Bharat’, ‘Our duty for the day’, ‘The great sons of Bharat’, ‘ Future of Bharat’ were some of the subjects on which he started delivering lectures. His language at all times remained resplendent throughout all his speeches. His incisive thoughts had a great impact on both Indian as well as foreign minds. He could spread the message of Vedant all around the world. Thus he won for Arya dharma, Arya people and Arya land its rightful prestigious position.

Swami Vivekananda held a lot of respect for the spiritual heritage of Bharat, but he did attack through his speeches its undesirable customs and the abominable caste system. Thus his speeches served as a wakeup call even to the Hindu society. His ardent appeal stuck lightening in the hearts of his dormant countrymen.  His natural state of being would have been to meditate on the formless eternal entity i.e. Nirvikar Samadhi. Yet he set aside his own renunciation and thought about the mortal struggles, sorrows and joys of common people; throughout his life he strived for their upliftment. ‘Real Sanyas is to sacrifice the self for the betterment of others’ – he lived this axiom.

Education should be such that it would create ‘human’ and character !

The burden of knowledge not understood throughout life but somehow filled in the brains does not mean Education ! Education should be such that it will create ‘human’, good character inculcating good thoughts. If you learn 4-5 good thoughts and try to inculcate them in you, your education would be better than learning by heart a whole library !

Today’s education has completely failed in creating ‘human’ but has created terrible defects !