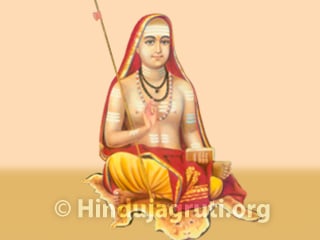 Jagadguru Sri Adi Sankaracharya was the greatest exponent of the doctrine of Advaita Vedanta and a savior of Vedic Dharma. Salutations to Sankara, who is an ever shining star on the sky of Indian philosophy. The existence of Vedic Dharma in India today is due to Sankara. The forces opposed to Vedic religion were more numerous and powerful at the time of Sankara than they are today. Still, single-handed, within a very short time, Sankara overpowered them all and restored the Vedic Dharma and Advaita Vedanta to its pristine purity in the land pure knowledge and spirituality.

Sankaracharya occupies a very important position in the history of Indian philosophy. It can be affirmed, without any fear of contradiction, that Bharata Varsha would have ceased to be Bharata Varsha several centuries ago and would never have survived the murderous sword, the devastating fire and the religious intolerance of the successive invaders, if Sankara had not lived the life he lived and taught the lessons he taught. And those lessons are still pulsating in every cell and in every protoplasm of the true aspirant and the true Hindu.

Shankara’s arrival on the scene was at a most critical juncture when both Buddhism and Hinduism were fast disintegrating into various sects and cults. Buddha’s original teachings were a reaction to the vedic sacrificial extremities. But in the later centuries practices like magic and sexual mysticism crept into Buddhism. Vedic religion was not very different, having given way to superstitious ways, and a large number of rituals. It was Shankara who tried to re-assess and integrate sound teachings of Buddha in the vedic (Hindu) following, and was successful in the revival and reformation of Hindu thinking and way of life.

Shankara was born of poor but pious Nambudiri Brahmin couple in the Kaladi village of the Kerala kingdom. He lost his father early. Shankara has ascetic leanings from the beginning and he wanted to put to use all of the knowledge he could acquire for the better use of the society. He was the couple’s only child and the mother resisted her son becoming a monk giving up all worldly life. It took great persuasion on Shankara’s part to win her over. He promised attending on her final hour.

He went in search of a guru for further spiritual guidance and studied under Govinda Bhagavatpada, who was a famous disciple of  the great saint Gowdapadacharya. Gowdapadacharya advocated monism or advaita. All the learning Shankara mastered was put to use through his brilliant eloquence. Dialetics, logic and semantics were the primary areas of scholarhood in those days, and the only means to achieve supremacy was to argue and win debates in august assemblies of scholars.  Shankara argued and won over many great scholars of his time belonging to different faiths. He established that the original teaching of the vedas was that God is one and the study of  vedas is the only way to salvation.

At the time Vedic texts were summarized in brief aphorisms. The basic texts of vedic knowledge was preserved in Brahmasutras of Badarayana, a work of First century A.D. This was known as the main composition of Vedanta (literally meaning “End or culmination of Vedas”, used sometimes as culmination of Indian thought). Shankara wrote a brilliant and convincing commentary on Brahmasutras which were accepted throughout India. He wrote commentary of Bhagavad-Gita, chief Upanishads and other philosophic works. He is created beautiful compositions in praise of God and Mother Goddess. Vedanta and its interpretation by Shankara is accepted and revered even by modern theologists including Swami Vivekananda and Aurobindo.

Shankara then took missionary work traveling the entire country (what is India today, then consisting of numerous feudal kingdoms). He established four muthas (or monasteries) in the four corners of the Hindu land — Kashmir in the North, Dwaraka in theWest, Puri in the East and in Sringeri in the South. These institutions are operational till today (year 2003), with innumerable followers upholding Shankara’s adwaitism.  These muthas and the pilgrims who visited them held India together as one nation for more than twelve centuries! All the heads of these institutions are today known as Shankaracharyas and wield tremendous political power in India. To distinguish these pontiffs from the first preceptor, Shankara is referred to as Adi Shankaracharya or Jagadguru (Universal teacher).

Shankara did not forget his old mother or the promise he had made. Tradition records that he was by his mother’s side in her final moments. He then arranged for her funeral, although he himself was an ascetic, “dead” to the world.While Shankaracharya criticized Buddhism in its decayed form, he assimilated many tenets of Buddhism  cleverly, like that of nirvana (void).  It was Shankaracharya who was responsible to absorb Buddha into Hinduism and recognize Buddha as an avatar (incarnation) of  God !Shankaracharya was only thirty-two years old at the time of his death. But his life’s mission was complete. Revival and reformation of original vedic religion, which is considered intellectual Hinduism is alive to this day.

What is Advaita Vedanta?

The doctrine of advaita vedanta as expounded by Sankara can be summed up in half a verse: “Brahma Satyam Jagan Mithya Jivo Brahmaiva Na Aparah” — Brahman (the Absolute) is alone real; this world is unreal; and the Jiva or the individual soul is non-different from Brahman. This is the quintessence of his philosophy.
According to Sri Sankara, whatever is, is Brahman. Brahman Itself is absolutely homogeneous. All difference and plurality are illusory.

source: (excerpts taken from the book “All about Hinduism”, written by Sri Swami Sivananda)