Rehabilitation of Kashmiri Hindus is not issue that is limited to only Kashmir but it is a matter of concern for the whole country ! – Shri. Tapan Ghosh, Hindu Samhati, Bengal New Delhi : It is very commendable to arrange such program at Jawaharlal Nehru University (JNU) where the atmosphere is anti-national. For that congratulations to Panun Kashmir and ABVP ! Rehabilitation of Kashmiri Hindus is not an issue limited to just Kashmir but it is related to the whole country. Fanatics may feel that they can divide Bharat if Kashmir is separated from Bharat; but we shall not allow that to happen for which this movement has been undertaken, stated Shri. Tapan Ghosh, the President of ‘Hindu Samhati’, an organization working for welfare of Hindus in Bengal. A meeting was held on 16th January at JNU on issues related to Kashmir under the movement ‘Ek Bharat Abhiyan’ by pro-Hindu and patriotic organizations and it was addressed by him. 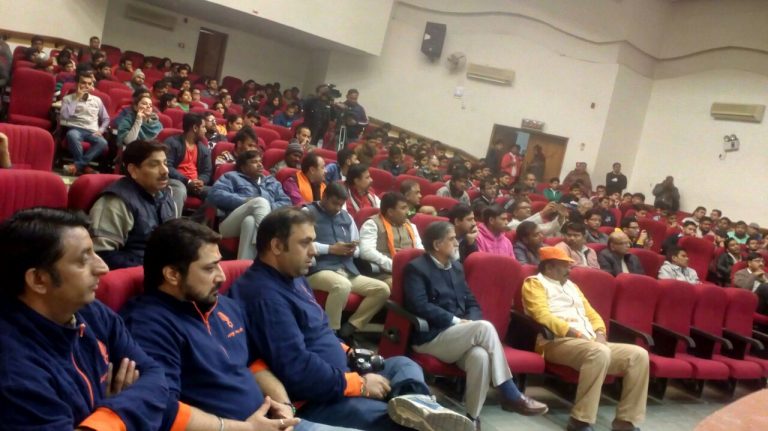 1. Shri. Radhakrushnan, Shiv Sena State Chief, Tamil Nadu : The issue is not only in the context of Kashmir but it also is related to us; therefore, we are here.

2. Shri. Arjun Sampath, Hindu Makkal Kachhi (Hindu Janata Party) : What happened with Hindus in Kashmir, is now happening with Hindus even at Tamil Nadu. It should not spread all over the country and therefore, Panun Kashmir is required.

3. Shri. Abhay Vartak, spokesperson Sanatan Sanstha : On 9th February 2016, anti-national slogans were raised here and within one year, we have given answer to communism by holding such program for rehabilitation of Kashmiri Hindus. Today, this country has the Prime Minister who is a ‘Hindutvavadi’. We expect that he would get back Panun Kashmir for us.

5. Shri. Suresh Chavanke, Editor, Sudarshan channel : This movement staged for Kashmiri Hindus has gained momentum during last one year. It needs to be intensified. I am with this movement.

6. Shri. Lalit Pandey, ABVP, JNU : Communists are concerned about refugees from other countries and raise voice for them; but why don’t they take up the issue of displaced Hindus in this country ?

7. Shri. Vijay Tikku, Vice President, Panun Kashmir : We were first forced to leave Kashmir 27 years ago and today, we have come here to express our views still there is opposition.

8. Dr. Shashi Toshakani, Professor, JNU : We had opposed to anti-national slogans raised in JNU. If we do not raise voice against displacement of Kashmiri Hindus, who would do it ? JNU Students’ Union, a communist organization opposed the meeting. There were 30 students who participated in staging opposition. They were raising slogans of ‘Sanatan Sanstha Murdabad’ and had tambourine in their hand. Slogans were also raised to the effect that the concept of Hindu Rashtra presented by Sanatan Sanstha has no place for Dalits, Muslims and women. (Sanatan’s views on Hindu Rashtra are known to the whole world; still communists make such false allegations but they keep quiet on conditions of Hindus in Islamic countries ! – Editor, Dainik Sanatan Prabhat)

There were few girl students among the students opposing to the program and they were smoking cigarettes. (Please note that such girl students who are part of this organization spit venom against Sanatan Sanstha which is striving for preservation of Indian culture ! – Editor, Dainik Sanatan Prabhat)