Muslims were given Pakistan though they were only 14%; then why Kashmiri Hindus should not get Panun Kashmir ? – Rahul Kaul 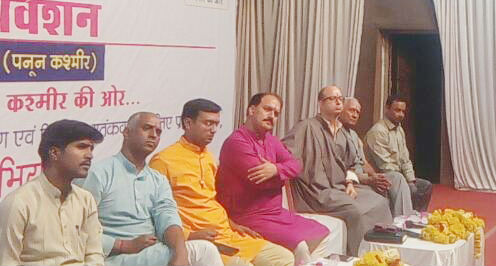 Indore (Madhya Pradesh) : 14% Muslims could divide Bharat and got Pakistan, then why can’t Kashmiri Hindus get Panun Kashmir to which they have right ? We are demanding a region of Kashmir as per the Constitution and will be loyal to it. A ‘Hindutvavadi’ Government like BJP should immediately agree to our demand. Hindus from all over the country will extend support. Why is the Government bowing before majority Muslims in Kashmir ? The above question was asked by Shri. Rahul Kaul, the President of ‘Youth for Panun Kashmir’ while addressing a convention and rally held at Marathi Samaj Bhavan on the occasion of Anniversary Day of ‘Bharat Swabhiman Manch’

Conditions in Kashmir should help to learn and wake up Hindus at least now ! –  Col. (retd) Manoj Burman

Earlier Hindus ruled over regions from Afghanistan to Cambodia; but slowly, parts of undivided Bharat were grabbed by invaders; still Hindus remained indifferent and situation like in Kashmir is being created all over Bharat. Are we going to wake up at least now ? Hindus need to learn from the example of Kashmir for saving other parts of Bharat.

5 lakh youth to be united for teaching a lesson to adversaries of this country ! – Rajdeep Singh, Bharat Swabhiman Manch

‘Bharat Swabhiman Manch’ will prepare 5 lakh youth from Madhya Pradesh who have love and feeling of sacrifice for this country. We shall rush to places wherever anti-national activities will be noticed.

Experiment carried out by jihadis in Kashmir is being carried out today all over Bharat ! – Rahul Razdan

We have experienced Hindus’ genocide in Kashmir; so whenever the issue is discussed, we still feel the pain. Today’s meeting is to see to it that Hindu brethren from this country should not go through whatever we have gone through. Kashmir was an experiment carried out by terrorists on Hindus and it is taking place all over the country now.

Hindus should join the activities of establishment of Dharma as their ‘sadhana’ ! – Yogesh Vhanmare, MP State Coordinator, Hindu Janajagruti Samiti

Most of the Hindus do not know definition of the word ‘Hindu’, as such they are far away from ‘Dharmacharan’ and in the name of ‘Dharma-yuddha’, few jihadis have taken the whole world to task with the strength acquired by them by abiding by their religion. Hindus should however, realize that it is a war between righteousness and unrighteousness and undertake spiritual practice because, with the strength of ‘sadhana’, one will be able to face this war. God has incarnated whenever there has been increase in unrighteousness and has established Dharma. Hindus should join the mission of establishment of Dharma as their ‘sadhana’.

Bharat can be a Hindu Rashtra when we become as powerful as lion ! – Shri. Anand Jakhotia, Sanatan Sanstha

Condition of Hindus has become like a flock of sheep. We need to be like lion; because Durgamata rides on a lion. Bharat will be a Hindu Rashtra when we become strong like lion.

Highlights : ‘Bharat Swabhiman Manch’, that was started with just 2 members,  has taken a leap in last year. Shri. Amit Sharma showed photographs on projector to show its progress.

What is ‘Ek Bharat Abhiyan’ ?

Shri. Rahul Kaul said while giving information on ‘Ek Bharat Abhiyan’, “During the ‘Akhil Bharatiya Hindu Convention’ organized in June 2016 by Hindu Janajagruti Samiti and Sanatan Sanstha, it was decided to fight for rehabilitation of Kashmiri Hindus by all organizations coming together, under the aegis of ‘Ek Bharat Abhiyan’. Later, under this ‘Abhiyan’, the issue was reached to the Government so also to Hindu community through rallies, meetings and resolutions held and passed in different States in Bharat.