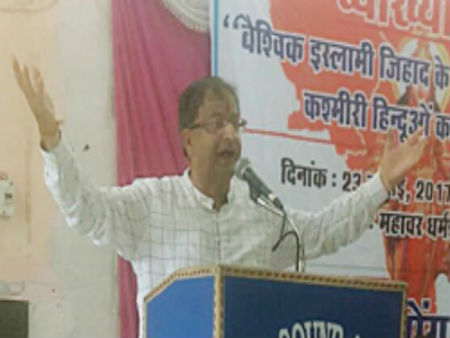 Alwar (Rajasthan) : The rulers are trying to solve Kashmir problems in wrong manner. Genocide that happened in Kashmir, is also happening now in Bengal, Kerala and Karnataka, in fact, all over Bharat. Rehabilitation of Kashmiri Hindus in Kashmir is the only solution on genocide. When Kashmiri Hindus go back to Kashmir, it will be a shock for ‘jihadis’, stated Dr. Ajay Chrongu, President of ‘Panun Kashmir’ during a rally jointly held by ‘Hindu Shakti Vahini’ and Hindu Janajagruti Samiti (HJS) at Mahavar Dharmashala under the aegis of ‘Ek Bharat Abhiyan – Kashmir ki Our’.

Intense wish of Shri. Prem Gupta and Shri. Rajan Gupta leads to organization of this rally

During the all-India Hindu Convention held at Goa in June 2017, it was decided by all pro-Hindu organizations to spread the movement rapidly under ‘Ek Bharat Abhiyan- Chalo Kashmir ki Our’. Shri. Prem Gupta and Shri. Rajan Gupta, the President and Secretary of ‘Hindu Shakti Vahini’ respectively heard about the heart-breaking condition of Hindus from Jammu. They decided to inform about the same to Hindus from Alwar and organized the rally.

Soldiers from all over Bharat have sacrificed for Kashmir ! – Shri. Abhay Vartak, national spokesperson, Sanatan Sanstha

Today, not even 35% Kashmir is in our hands. The rulers feel that Hindus should forget about oppression of their women in Kashmir. How is it possible ? The Government presented proposal of Rs. 20 lakhs to Kashmiri Hindus; but none of them accepted it; exhibiting self-respect. Soldiers from all States of Bharat have sacrificed their life for protection of Kashmir and the Government shouldn’t forget the same. Our soldiers are losing life due to wrong political policies.