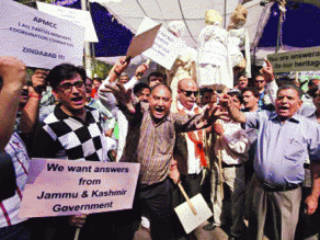 In an act of rare intellectual daring, the beleaguered Hindus of Jammu & Kashmir have taken recourse to the Constitution of India to hit back at the extreme majoritarianism practiced by successive regimes in the State. The Supreme Court has accepted a public interest petition (489/2016) that was rejected by the Jammu & Kashmir High Court, which accuses successive State Governments of siphoning off benefits exclusively meant for minority communities under various Central and State schemes and giving them to others in an illegal and arbitrary manner.

This is the first time since the Calcutta Quran Petition (1985) that Hindus have acted in such an assertive manner. Long inured to being treated as second class citizens on account of the special status (Article 370) bestowed upon the State by first Prime Minister Jawaharlal Nehru to pamper Lord Louis Mountbatten’s protégé, Sheikh Mohammad Abdullah, Hindus have tended to be quietist for most of the past seven decades.

The situation did not change substantially even after the violent expulsion of Hindu families from the Kashmir valley in the winter of 1990. But in recent weeks, Jammu families have begun to feel the pressure and to quietly migrate (over 200 so far, according to informed sources) to save themselves from a plight similar to that of Kashmiri Pandits, who have not been rehabilitated after over a quarter of a century of exile. As militancy spreads in Kashmir valley, with violent mobs not sparing even policemen, Hindus are feeling increasingly insecure.

Many Jammu residents, especially ex-servicemen families, are now organising to resist. They won a major victory last month by scuttling the Peoples Democratic Party-led Government’s attempt to pass the Jammu & Kashmir Alienation of Land and Transfer of Property Act by getting it referred to a select committee of the Assembly.

The Bill was approved by the Cabinet on June 23, with the BJP members not realising its implications till Pawan Gupta, MLA (independent, Udhampur), raised the alarm. The impugned legislation aimed to freeze sale of land by power-of-attorney and agreement-to-sell in Jammu division to prevent non-permanent residents from purchasing land. This would prevent non-State subjects from buying land to set up industry or businesses in Jammu (as is the case in the Kashmir valley), and deny employment opportunities to Jammu youth. Another clause denied rights to ancestral property to a woman (and her progeny) if married a non-State subject and living outside the State. Ultimately these issues would impact the demography of Jammu and create a Kashmir-like situation there.

But now, acting on a petition from Jammu lawyer and social activist, Ankur Sharma, a Supreme Court bench headed by Chief Justice TS Thakur has issued notices to the Centre and National Commission for Minorities regarding setting up of a State Minority Commission in Jammu & Kashmir to identify religious minorities like Hindus, Sikhs, Buddhists, Christians and disburse benefits of Central and State welfare schemes to them.

In TMA Pai Foundation & Ors Vs State of Karnataka & Ors  (2002) and other decisions, the Supreme Court has ruled that linguistic and religious minorities are covered by the expression “minority” under Article 30 of the Constitution. Since States were reorganised on a linguistic basis, the State will have to be the unit for the purpose of determining the minority, and not the whole of India. It follows that religious and linguistic minorities, put at par in Article 30, must be recognised State-wise. Under this definition, the tiny Jain community in Jammu & Kashmir (not listed as a national minority) would also be eligible for minority benefits.

Despite the unequivocal nature of the judgement, till date, Jammu & Kashmir has not passed the State Minority Commission Act under which it can notify minorities vide the prescribed criteria. The Constitution of India does not define ‘minority’ but refers to ‘minorities’ which are ‘based on religion or language’. It reserves certain rights for minorities to protect their identity.

Accordingly, the cultural and educational rights of religious and linguistic minorities are embodied in Articles 29 and 30 of the Constitution. In Jammu & Kashmir, Kashmiri is recognised as the official language of the State along with Urdu, but Hindus resent the imposition of the Nastalik script (akin to Arabic) instead of Devanagari or Sharada script. Attempts to have the latter scripts recognised at par with Nastalik have failed so far. Intervention by the Supreme Court may change this.

Although Jammu & Kashmir has a separate Constitution, Part III of the Constitution of India has been extended to the State and hence the identification and notification of minorities is essential for enforcing the fundamental rights of citizens enshrined under Articles 29, 30, 14, 19 and 21 of the State of Jammu & Kashmir. In January 2012, the National Commission for Minorities Act, 1992 was amended and made applicable to Jammu & Kashmir.

The immediate provocation for the petition was that the Government of India offered 20,000 high value scholarships for 2007-2008 in technical professional education to identified national-level minorities. In Jammu & Kashmir, Muslims (then 66.97 per cent of the population, 2001 Census) received 717 scholarships (over 95 per cent), Christians (two), Buddhists (22) and Sikhs (12) out of a total of 753.

Yet the guidelines for implementation of the Prime Minister’s new 15-Point Programme for Welfare of Minorities stipulate, “in States, where one of the minority communities notified under Section 2 (c) of the NCM Act, 1992 is in fact in majority at State level, the earmarking of physical/financial targets under different schemes will be only for the other notified minorities”. Jammu & Kashmir is included among the listed States.

As fundamental rights, with few exceptions, are inalienable natural rights, they cannot be taken away by the State Legislature or Parliament by omitting to legislate in this regard. Diversion of minority rights to the majority community is vote-bank politics and abrogation of the fundamental rights of minorities. This injustice needs to be rectified by speedy identification and notification of minority communities.

As Jammu & Kashmir comprises three distinct regions (Jammu, Kashmir and Ladakh) of widely varying geography, topography, ethnicity, religion, race, language, script and culture, the State cannot sweep identities under carpet and corner rights for a group which comprises 68.31 per cent of the population, as per Census 2011. Interestingly, Jammu for India convener, Prof Hari Om, argues that under international norms, any group comprising over 10 per cent of the population of a country is not regarded as a minority. India needs to revisit the criterion for designating minorities.