After independence fake secularism is destroying India culturally, socially and politically which even 500 years of foreign rule had not been able to do. Most people do not know that the word ‘Secularism’ was not in the constitution and that it was Indira Gandhi who during the dark days of emergency altered the words ‘Sovereign Democratic Republic to ‘Sovereign Socialist Secular Democratic Republic’.

According to a learned man these two ‘S’ have destroyed the country. Hence India has already dumped socialism and it will have to dump this pseudo – secularism also at the earliest if India is to progress.

Real secularism implies that there should be no discrimination by the state against a person or a society on the basis of religion. This helps the progress of democratic values and freedom but the very opposite is being done today by appeasing and favouring the minorities on the basis of religion, impairing progress of the country. Today every political party is misusing secularism for its petty political ends as a result it is distorted beyond recognition so much so that telling the truth for the good of the nation is often considered anti- secular. 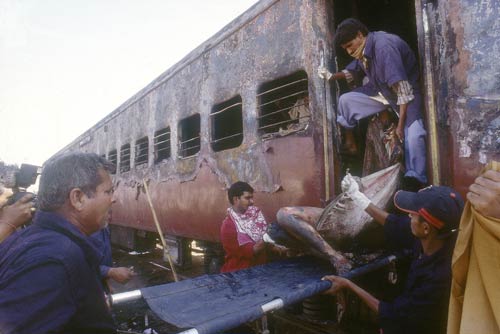 It is communal to condemn the massacre of 30 thousand Hindus in Kashmir and 58 Rambhaktas in Godhra Kand but it is secular to condemn the 2002 riots in Gujarat which in fact was a sharp reaction to Godhra. This Godhra kand was planned by Pakistani elements in India with the aim of creating riots all over India which did not materialize due to the peaceful nature of Hindus. But the pseudo secularists never condemned the Godhra kand incident thereby encouraging the hardcore communal and Pakistani elements. Such opportunistic exploitation of the communal platform has been the general characteristic of the pseudo secular leaders and their political parties. According to Shri M.V.Kamath pseudo secular politicians have been using the word secularism to bludgeon their opponents into submission to their whims and fancies. Today the more communal a person is the more loudly he preaches secularism that is why today communalism, separatism, anti-nationalism, untruth and atrocities against Hindus are on the rise. Unfortunately for fear of being dubbed as communalist no socialist, Gandhian, Secularists and human right preachers have the courage to speak against this injustice, but it spells big trouble for Indian nationhood.

According to an American news agency report, terrorists from 12 countries have been infiltrating India armed with arms, RDX, ammunitions. They have sneaked into Kashmir, Himachal Pradesh, Uttar Pradesh, Assam, Bengal and Bihar in large numbers with the connivance of secularists and are lying low in 176 terrorist centers for a civil war to happen. Three crore Bangladeshi infiltrators have been welcomed in India by these secular leaders to create their vote banks which is increasing poverty, unemployment and terrorism. Such secularism is clearly anti-national and anti-security.  But no terrorist has been punished so far because anti national secularists want to win the elections with their help and yet they call themselves as patriots and nationalists.

At the time of independence when Gandhism was ruling the roost there were nationalist Muslims like Sir Syed Ahmad Khan, Jinnah, Ali brothers, Poet Iqbal and others but they later began to demand Pakistan because separatist seeds were sown in their mind by secularists who made a distinction between the majority and minorities.

Each and every enactment engineered by the rigid secular ‘Nehru Gandhi’ dynasty was aimed at the appeasement of the Muslims creating permanent rift between Hindus and Muslims, a divide and rule ‘policy of the British Government.

Nationalist Muslims want to handover peacefully the Ramjanmabhoomi to Hindus and remove 700 years of ill will between them but these politically secular leaders do not let it happen as it will weaken their vote- bank.

Secular leaders built a Haj House spending crores of rupees on it. If only Hindus had been similarly funded to build a Tteerth Bhawan it would have created communal harmony sans discrimination.

Under article 29 and 30 Muslims can teach Koran and Christian can teach bible in Govt. aided schools but as a sharp discrimination, Hindus are not allowed to teach Gita, Ramayan, Ved, Upanishad. As a consequence Hindu youths are losing their moral caliber, honesty and the ability to distinguish between right and wrong. Hence there is all round corruption in the Country damaging its economic progress. There are hundreds of such discriminations against’ Hindus Unfortunately the media instead of exposing the hypo racy of corrupt and bogus secular leaders, who are destabilizing the country for their petty gains, are supporting the crafty leaders to gain some favour from them. Can we face china and Pakistan in this manner ?

Cunning secular leaders contend that they hold up secularism for the benefit of Muslims but in fact a bare 10% Muslims are able to lift themselves from poverty and backwardness pushing them to crime.

Muslims can make tremendous progress through modern education but unfortunately these secular leaders have made Muslims dependant on the Govt. to the maximum possible extent so that they are always demanding something or the other and sliding backward farther and farther. The Muslims of England and America have progressed much better because they are not a pampered lot and hence are forced to stand on their own legs.

Even telling Muslims to control their booming population or asking them to educate their woman folk is being termed communal. Consequently Muslim woman have become victims of horrible exploitation. Having more then one wife is deemed a crime in 16 Muslim countries, but in India in the guise of secularism they are allowed to keep even four wives- a blatant bid to extract votes at the time of election from Muslims, increasing their poverty and backwardness.

Govt. cannot eradicate any community’s poverty. Only mutual trust and goodwill between Hindus and Muslims can make Muslims rich and progressive as peaceful volhras and khoja Muslims have made tremendous progress through their good will in business with Hindus. Can you build a strong, democratic and secular nation on a foundation of untruth, injustice, and selfishness? Fortunately the beginning of its end is in sight.

Strange things are happening in India in the name of Secularism. If you want to be called a secularist intellectual by the press, all you need to do is to denounce nationalist Hindu institutions like the RSS as communal or autocratic. It is such brand of so-called intellectuals who encourage Muslims to increase their population. They are quite vociferous while denouncing the efforts to protect sacred cow the basis of agricultural economy of India, or the Supreme Court judgement in the Shahbano case but they maintain dead silence when thousands of Hindus are massacred in Kashmir, Bangladesh, Ayodhya and other places and thousands of temples are demolished in Pakistan and Bangladesh. They created hell when the disputed structure was demolished, situated at the birth place of Bhagwan Sri Ram, most sacred to 90 crore Hindus.

Shabana Azmi and Dilip Kumar kept mum when 11 years old Ameena was married off to a 60 years old Arab. Secularists are supposed to be those who slander Mother India, those who hoist black flags on Republic Day but they have nothing to say when true nationalists unfurling the tricolor are fired upon.

Those who oppose Vande Mataram but stand with folded hands before the fundamentalists and extremists, for these so-called patriots, only vote politics and self interest are the motto of life.

Is it any wonder that India faced ruin under the rule of these fake secularists ?