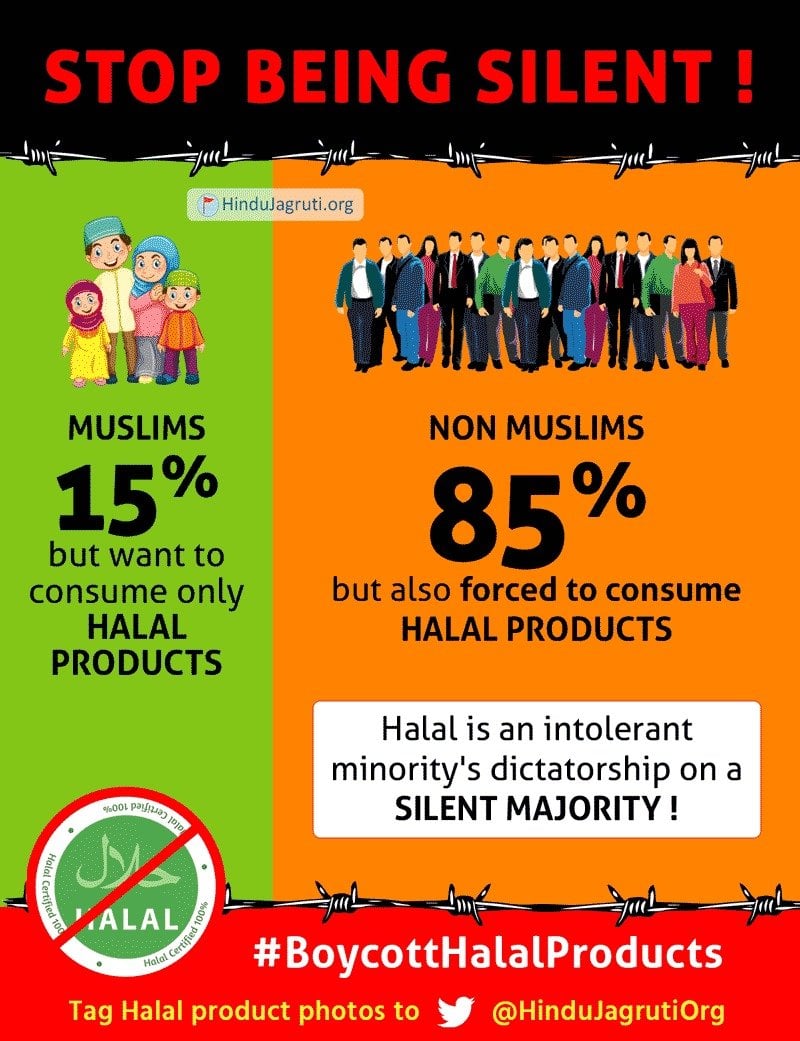 Presently, we are witnessing a growing clamour by Indian Muslims to have every item certified as ‘Halal’ i.e. lawful or permissible as per Islam. This demand is no longer limited to just meat but Muslims are demanding ‘Halal’ certification even for grains, fruits, cosmetics, medicines, etc. for which the companies have to unnecessarily pay the certifying body outrageous sums like Rs.21,500/- for every product. The most important thing is that such certification is not issued by FSSAI but by a Muslim organisation ‘Jamiat Ulama-I-Hind’. This Halal economy has gained a strong foothold across the world and is currently valued at about 2 trillion Dollars (almost as much as India’s GDP). It is an international conspiracy to create a parallel economy by interfering in Hindus’ trade and business. It is a dictatorship of minority Muslims over the majority !

Request the patriotic and Devout Hindu population of India to send the email petition !

Request you to please send the email with this demand to Hon’ble Prime Minister of India by clicking on the below button. Request you to send a copy of the email to [email protected]
(Note: ‘Send Email’ button will work only on Mobile)

We wish to bring it to your notice that…

1. The Indian Government had earlier refused permission to start Islamic Banks based on Sharia principles; therefore, Muslims have devised a new system to collect funds directly based on their religion. Any consumer has the freedom of following his/her religion conferred by the Constitution and demand materials and things that are permitted under their religion. Muslims, have exploited this freedom to demand that every item and product be ‘halal’ certified.

2. Only because the Muslim minority which makes up 15% of the population wants to consume ‘Halal’ meat, it is being forced upon 85% of the rest of the people. Now, this ‘Halal’ certification has not remained restricted to meat but it has extended to even food items, cosmetics, medicines, hospitals, housing societies, and malls. It includes snacks, sweets, grains, oils, cosmetics, soaps, shampoo, toothpaste, nail polish, lipsticks also. Therefore, this Hala’ certification for meat is now being extended to other products which are shuttering away the businesses of Hindu businessmen.

3. This demand is not limited to private companies but it has also engulfed the Government undertakings like the Indian Railways and tourism corporations where ‘Halal’ is mandatory. It is said that India is a secular country. Why is that only items permissible by Islam are sold by Railways and Air-India? Will the Government undertakings like Railways and Air India acquiesce to distribute products manufactured and certified by only certain Hindu manufacturers?

4. Under the Indian Government’s Health and Family Welfare Ministry, there is the ‘Food Safety and Standards Authority of India (FSSAI)’ and in every State, there is an independent ‘Food and Drugs Administration (FDA)’. While the government system functions on secular principles; how were private Islamic organisations permitted to start issuing ‘Halal’ certification? When the Government issues such a certificate, it rigorously tests those products, but no rules and regulations set by the Government are followed while certifying some products as ‘Halal’. How is it even legal for a religion-based private organisation to charge fees in the name of ‘Halal’ certification? Who will be responsible if such Halal certified product causes any serious health issues?

5. The unrelenting takeover of the Halal economy follows a very simple path. Profit from ‘Halal’ certification, funnel that money through Islamic Banks for own products; extend financial aid through Islamic Banks to companies which are manufacturing ‘Halal’ products and then capture the international market, such chain of activities has resulted in a noticeable change in the financial position of Islamic Bank. There is an increase of 22% in the wealth of this bank from 6.9% in the year 2000. This way, the ‘Halal Industry’ has become the fastest growing economy in the world.

7. Meat is considered ‘Halal’ only if the animal is slaughtered by a Muslim; therefore, the meat industry, worth over Rs. 63,646 crores, has gone to Muslims while Hindu butchers and Hindu businessmen have become jobless.

The organisation’s Bengal President Siddiqullah Chowdhuri had opposed CAA and in this connection, even threatened the Central Home Minister Amit Shah that he would not be allowed to step out of the airport. The same organisation had declared they would provide legal assistance to those accused of murdering Kamlesh Tiwari, a Hindu leader from Uttar Pradesh. This organisation has provided legal aid to all the Muslims accused of various terrorist attacks such as the Mumbai railway blast of 7/11; Malegaon bomb blast of 2006; German Bakery blast in Pune; 26/11 Mumbai terror attacks; series of bomb blasts in Zaveri Bazar of Mumbai; Jama Masjid blast in Delhi, blasts in Karnavati (Ahmedabad) city, etc. Jamiat is fighting legal cases 700 such people and funds required for the same are paid by Hindus through Halal certification. It shows that Halal funds are utilised for helping those accused of being involved in heinous acts like terrorism. 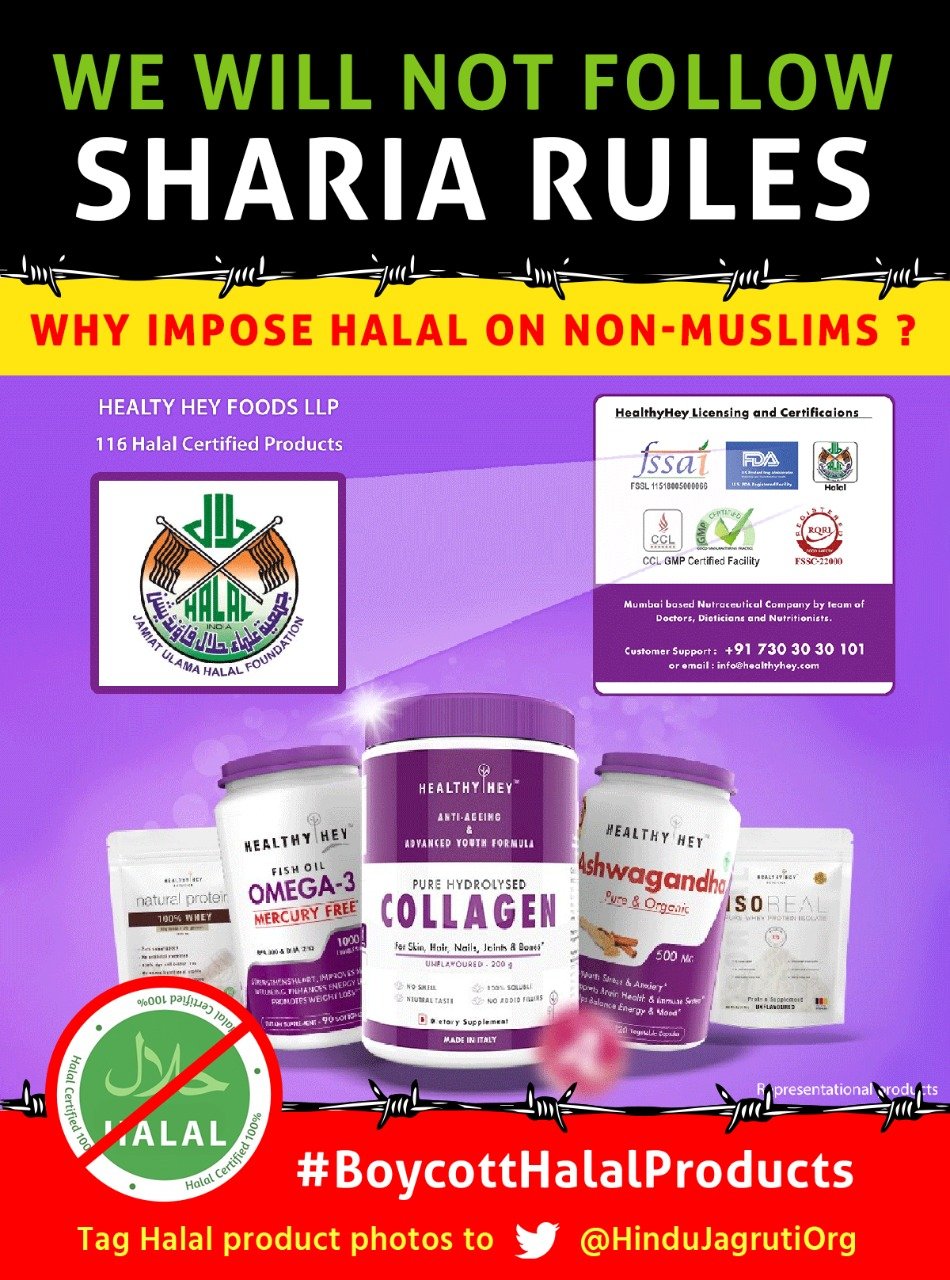 Therefore our humble but fervent request to you is that

1. Today a religion-based ‘Halal’ certification is imposed on other communities. Forcing non-Muslim communities to buy only ‘Halal’ products is an affront to the religious freedom of the majority and other non-Mulsim minority communities. Therefore, Halal certification must be banned in India as it promotes religious discrimination.

2. The permission granted to the private organisations for issuing ‘Halal’ certification should be immediately rescinded.

3. The system of providing only ‘Halal’ certified products in the Government undertakings such as Railways and Air-India should be immediately discontinued.

4. CBI should conduct an inquiry into all the organisations which are issuing ‘Halal’ certification and whether their funds are being used to help terrorists. An in-depth inquiry should also be conducted into these organisations to check whether they pose any threat to national security.