Sangli : The citizens of this country feel safe with the nationalised banks, post office, etc since these are the Government’s authorised establishments; similarly, the Food and Drugs Administration (FDA) of the Government is the highest authority for the issue of certifications. There is FDA for issuing certifications for the Central and State Governments; besides there is the Indian Government’s Food Safety and Standard Authority of India (FSSAI); therefore, there is no need for a separate Halal certification system. Hindus should, therefore, celebrate halal-free not only Diwali but their every festival as ‘Halal-free’, appealed Mr Omkar Shukla, the Regional Vice President of ‘BJP- Cultural Front’ while addressing the press conference.

Mr Manoj Khadye, the Coordinator of Hindu Janajagruti Samiti (HJS) for Gujarat State, west Maharashtra, and the Konkan region explained, in detail, the background of Halal certification and its adverse effects, the campaign started by HJS in this connection, etc. Mr. Santosh Desai of HJS was also present on the occasion.

Protest by pro-Hindu organizations in 8 states across the country for ‘Halal-free Diwali’ ! ‘Halal’ is no longer limited to meat, but everything a Muslim can adopt according to Sharia law is ‘halal’! It should be noted that the process of converting non-Muslims to the Islamic way of life is ‘halal’. A Hindu woman who had opened a ‘Non Halal ‘restaurant in Kerala was attacked and injured by fanatics recently. The condition of Hindu society has become so pitiable that Hindu society in India cannot even demand its rights. There is no doubt that radical Muslim societies are creating their own ‘economic monopoly’ in India through ‘halal’. Hindu religious leaders, sects, organizations, etc. should all contribute for the implementation of the movement against halal, asserted Shri. Ashish Dhar addressing the Hindu Janajagruti Samiti organized ‘Why and how to celebrate this year – Halal Free Diwali!’ Online Webinar.

Speaking on the occasion, industrialist and filmmaker-distributor Shri. Prashant Sambargi questioned as to where did this ‘Halal’ come from when there are only two Government agencies issuing food certificates in India? If any trader is forced to certify halal, he can lodge a complaint with the police. By filing a petition, the Central Government should write a letter to remove ‘halal’ from the Indian market. Halal has infiltrated the private sector, the army, the railways and other government sectors. A collective fight against this will surely succeed.

Supreme Court Advocate Shri. Umesh Sharma said, “Halal is being used in the country just like the Waqf Board has seized land across the country.” On the one hand, we call the country ‘Secular’, but for a particular society, it is ‘halal’ even in the government sector. ‘Halal’ in a way completely violates Articles 14 and 19 of the Constitution. This will be challenged in court.

Madhya Pradesh and Rajasthan Coordinator of Hindu Janajagruti Samiti Shri. Anand Jakhotia said, “Attempts to bring Islamic banks to India have not been successful, so a parallel economy is being created in India through halal.” Halal is causing a lot of damage to Hindu traders. Would the Hindu community have been allowed to implement a halal certificate in this country? Asking such a question, he also appealed to the Hindu community to participate in the ‘Halal Free Diwali’ campaign.

Spontaneous response to the ‘Halal Free Diwali’ campaign : Hindus from 8 states of Maharashtra, Goa, Uttar Pradesh, Jharkhand, Bengal, Assam, Tripura and Meghalaya participated in the ‘Halal Free Diwali’ campaign and launched an ‘online’ agitation. Memorandums were sent to Hon. Prime Minister Shri. Narendra Modi from 83 places. The use of the hash tag #Halal_Free_Diwali as part of the movement was met with spontaneous response. The hash tag was trending at number four nationally on Twitter.

Why does secular India need a religion-based ‘Halal Economy’ ?

‘Halal’ is an Arabic word and it means lawful or permitted as per Islam. The demand for ‘Halal’ was started with meat and now it is extended to even vegetarian food, besides cosmetics, medicines, hospitals, housing societies, etc. ‘Halal’ certification has been mandatory by paying money to the Islamic organisations like ‘Halal India’, ‘Jamiyat Ulema-e-Hind’, etc. There is an organisation of the secular Indian Government viz.theFood Safety and StandardsAuthority of India (FSSAI) for issuing necessary certification, why is then a private Islamic certification being forced on companies? The population of Muslims, which is claimed to be a minority, is only 15 to 17% in India, so, why is ‘Halal’ being imposed on the other majority Hindus and non-Muslims? Even foreign companies like McDonald and Dominos are serving ‘Halal’ food to all consumers. The most important point is the millions of rupees earned through such ‘Halal’ certification is received by a few Islamic organisations instead of the Government and some of the organisations issuing such certification are using the money to extend legal aid to the fanatics involved in terrorist activities. The parallel economy in secular India is a very serious matter for the security of this country and the Government should immediately stop this system of ‘Halal’ certification. This demand should be made by all Hindus and Hindus should celebrate ‘Halal-free Diwali’ this year by boycotting all ‘Halal’ certified products, appealed Mr Ramesh Shinde, the national spokesperson of Hindu Janajagruti Samiti (HJS) while addressing a press conference held at Panaji. Mr Satyavijay Naik of HJS was also present on the occasion.

It is most shocking that in secular India, even government undertakings like ‘Indian Railways’ and ‘Tourism Corporations’ are serving ‘Halal’ certified food. From pure vegetarian snacks to dry fruits, sweets, chocolates, grains, oils; besides cosmetics, soaps, shampoo, toothpaste, and lipstick are being ‘halal’ certified. Mr Nicholas Taleb, a scholar from Britain has called it ‘Minority Dictatorship’. If these things continue, it would not be wrong to say that India is moving towards ‘Islamisation’.

Where is the need for Islamic organisations in India to issue ‘Halal’ certification when the Indian Government’s FSSAI is doing this job? For ‘Halal’ certification, Rs. 21,000/- are charged initially and Rs. 15,000/- are charged later for annual renewal. It is most important to quell this parallel economy created out of ‘Halal’. Hindus should, therefore, use their right as consumers and boycott all ‘Halal’ certified products in Diwali and boycott even food from McDonald and Dominos etc, and join the campaign of ‘Halal free Diwali’, which is an appeal made by HJS. HJS has been trying to create awareness through staging demonstrations, submitting memorandums, social media, etc. on this issue.

Questions asked by reporters during the press conference

Questions asked by reporters during the press conference held at Panaji and answers given by Mr Ramesh Shinde, the national spokesperson of Hindu Janajagruti Samiti

Hindu Janajagruti Samiti (HJS) held a press conference at Panaji on 27.10.2021 to appeal to Hindus to celebrate Halal-free Diwali this year and boycott Halal certified products. Mr Ramesh Shinde answered the questions asked by the participating journalists which are given below.

R: Why doesn’t the Government take action against the system of ‘Halal’ certification?

RS: It is expected of the Government to take action.

R: What efforts HJS is going to make for creating awareness amongst people about Halal certification?

R: Why only Hindus are targeted during their festivals on the matter of pollution?

RS: Immersing Shri Ganesh idols made of clay does not pollute water. IIT, Mumbai has checked a sample of water before immersion and after immersion and found that water doesn’t get polluted due to the immersion of idols. It is systematic false propaganda against Hindus. It was, however, expected of the anti-Hindus to prove pollution through the medium of science. 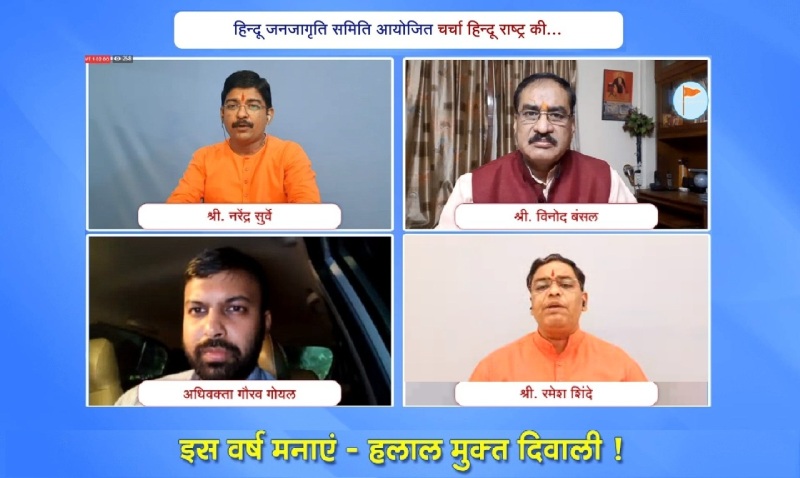 In an advertisement of CEAT Tyres, Amir Khan advises Hindus that roads are not meant for bursting crackers, but he does not say anything about roads not meant for even reading ‘namaz’. In Fab India’s advertisement, Diwali is called ‘Jashn-e-Rivaz’. Tilting Hindus’ traditions towards ‘Islam’; creating ‘Halal’ system followed with ‘Halal’ economy to strengthen Islamic Bank is a ploy and Hindus need to be alert towards these issues. A lot of commercial transactions take place through online facilities in India involving the trade of millions of rupees. Hindu consumers spend a lot of money on buying new things during the Diwali festival; therefore, we are staging such a ‘Halal-free Diwali’ movement and all Hindus should participate in it. Hindus should avoid buying ‘Halal’ certified products and products of such companies which are ‘Islamising’ Hindu traditions. Instead, celebrate ‘Halal-free’ Diwali this year, appealed Mr Ramesh Shinde, the national spokesperson of Hindu Janajagruti Samiti (HJS) during the special online discussions program held by HJS on ‘Let us celebrate Halal-free Diwali’.

Mr Ramesh Shinde said further that Hindus are still ignorant about Halal certification. There are government organisations like FSSAI and FDA in India to issue certificates for the quality of products; then why should there be a compulsion of taking ‘Halal certification’ from Islamic organisations? ‘Halal’ has not now remained limited to meat, but it has spread to essential commodities, food items, sweets, cold drinks, hospitals, residential complexes, etc. All money collected through ‘Halal’ certification goes to Islamic Banks. ‘Halal’ system is a dictatorship of minorities and we should know that wherever there is a dictatorship, there is terrorism.

Mr Vinod Bansal of Vishva Hindu Parishad (VHP) said that there are 8-10 staunch Islamic organisations including Jamat-e-Islami’ which have been given the right to issue ‘Halal’ certification. The money earned through ‘Halal’ is used for terrorist activities which has been proved not only from the incidents happening in India but all over the world. Hindus should boycott all companies which issue ‘Halal’ certificates and expose the true form of such organisations and companies to people. Hindus should take initiative in this context.

Gaurav Goyal, a Supreme Court advocate said that there is confusion about where the money earned through the ‘Halal’ system is used. He said he has read articles in various media about the use of such money for wrong things. ‘Halal’s parallel economy will have a bad impact on the Indian economy; therefore, Hindus should keep away from ‘Halal’ not only during Diwali but throughout the year. As advocates, we will legally fight against ‘Halal’, stated advocate Goyal.

The Bengal President of @JamiatUlama_in which is a certifying authority of Halal had publicly warned that he will not allow Sri. Amit Shah ji to enter Kolkata

The Killers of Kamlesh Tiwari are defended by Jamiat #Halal_Free_Diwalipic.twitter.com/dCsyHhYxIc