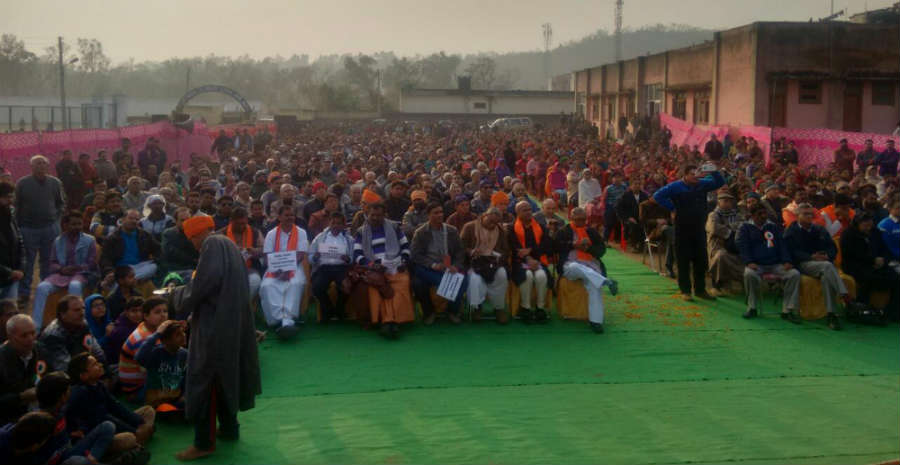 Panun Kashmir organized a mega public rally in Jagati Township on 18 January under the ongoing ‘Ek Bharat Abhiyan – Kashmir Ki Aur’. The rally was attended by scores of delegates from various Nationalist organizations from all over India to establish a connect with the plight of Kashmiri Hindus living in exile for last 27 years. The displaced members of Kashmiri Hindu community living in Jagati gave a warm welcome to these delegates and appraised them about the inhuman and pathetic condition of inmates of this colony and appealed them to offer the message to the larger nationalistic masses of this vast nation to rise and seek justice for the nationalistic masses of this India in general and Kashmiri Hindu community in particular.

Speaking on the occasion inmates of Jagati through their representative Sh Bushan Lal Bhat and     Sh Roshan Lal Bhat ( Ex Apex Committee Member) impressed upon the need for the message of Panun Kashmir to be aired across the length and breadth of this country. Narrating the tales of persecution and duress under which Kashmiri Hindus were subjected to flee their motherland and subsequent inhuman and pathetic conditions under which the exiled community were made to live, the representatives of Jagati Township called upon these delegates to take cognizance of the growing menace of Islamic radicalization and its threat which is not limited to Kashmir valley alone but to the whole country.

No power can stop realization of Panun Kashmir : Agnishekhar

In his direct message to the separatist regime in Kashmir, Dr Agnishekhar, the convenor of Panun Kashmir gave them a open challenge dare stop the flow of Indian nation into Kashmir. Panun Kashmir is the fight of righteous forces and no power can stop its realization. Kashmiri Hindus, he said have first stake on Kashmir and the movement which Panun Kashmir started 27 years back will reach its logical conclusion with the creation of Separate Homeland for Kashmiri Hindus in North and East of River Vitasta.

Speaking on the occasion Sh Sushil Pandit, seasoned Political activist of the community called upon the government to realize a smart city for Kashmiri Hindus in Kashmir Valley with separate Geographic and Political rights. Speaking on the occasion various national delegates from various nationalist organizations gave a candid and categoric message to the Government of India to initiate dialogue with Panun Kashmir and seek ways and means for the creation Separate Homeland for Kashmiri Hindus to secure the future of not only the exiled Hindus but all the nationalist Indians.

Nation has been dumb to the plight of Pandits : Pramod Mutalik

Pramod Muthalik, founder Sri Ram Sena speaking on the occasion expressed deep sympathy and regret that the whole nation has been dumb to the plight of Kashmiri Hindus all these years and assured that the voice of the persecuted and hounded kashmiri Hindus will be heard by this nation for the issue which led to the exodus of Hindus in Kashmir is prevalent in various parts of this country and like a cancer it is eating into the vitals of this country. Connecting the movement of Ek Bharat Abhiyan – Kashmir Ki Aur initiated by Panun Kashmir and all the nationalistic organizations with the national resurgence, Sh Muthalik termed it as the treatment to the malignancy which is erupting through Islamic fanaticism and eating into the vitals of this country.

Shri. Tapan Ghosh, a fire brand Hindu nationalist from West Bengal challenged the separatists and all those forces inimical to Indian nation and its unity to stop fiddling with the idea of balkanizing India. India has a historical continuity of nearly 10000 years and Indian Nation will not succumb to such forces. In a message to Shri. Narendra Modi, Shri. Tapan Gosh advised him to respect the mandate which made him the Prime Minister of this country and in a stern message called upon him to stop incentivizing separatism in this country, a policy which has ruined this country already.

Prof Hari Om, speaking on the occasion highlighted the growing menace of Islamic radicalization across the length  and breadth of this country. Assuring the support of Jammuites in this struggle of Kashmiri Hindus, Prof Hari Om asserted the importance galvanizing the nationalist forces in the state of Jammu and Kashmir to give a befitting reply to the regional marginalization and deprivation of Jammu, Ladakh and Kashmiri Hindus.

Addressing the masses  Dr. Ajay Chrungoo explained the need and importance of this event in wake of the continued neglect and denial of the successive governments both at state as well as national level. He said that it is time that Panun Kashmir as a solution to Kashmir problem is recognized as a national imperative and in this direction Panun Kashmir has embarked on a nation wide campaign. We are getting a huge responsive from the day we started this campaign under the banner EK BHARAT ABHIYAN – Kashmir KI AUR. The rally was addressed by various noted personalities like Dr Shakti Bhan, Sh Vijay Tickoo, and Sh Ramesh Manvati.