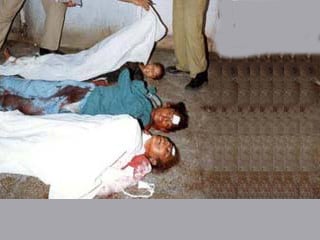 1. An Appeal to world by Kashmiri Victims Diabolical plan of Pakistan for the Jihadiization of Kashmir Reference: http://www.kashmir-information.com/Appeal.html

The Kashmiri Pandits (Hindus) in the valley of Kashmir, irrespective of their age, sex, position status or situation became the prime target of the terrorists’ onslaught. They were warned and threatened, individually and collectively, through word of mouth, through insinuation and innuendo, through posters and press and over loud speakers installed in thousands of mosques all over the valley.

4. The Islamic Brutality towards Hindus

In a letter to the Urdu daily, Jasarat, Amir Humza Qureshi, wrote: “It is a fact that people of this region (Northern Areas) are facing more human rights violations and whenever the official (Pakistani) media talks of repression in (Indian) Kashmir, people with strong hearts laugh at this hypocritical attitude, and people with weak hearts cry.” “India is not perpetrating even one hundredth part of the repression that people spread over an area of 28,000 miles have been facing for the past 50 years. The Indian Government has given people all their fundamental human rights and in spite of that they are in a state of confrontation against the government. But the people of this region (Northern Areas) are far behind the rest of the world in matters of fundamental human rights, justice and economic development.” This is in stark contrast to those in the Islamic movement that see Indian Kashmir as territory that needs to be liberated from the clutches of India, and see any retreat from confrontation with India (regarding Kashmir) as a betrayal of the “Islamic” cause. For instance, an opinion piece on khilafah.com argues: “Therefore, the only way forward for Kashmir is to liberate it physically and return the rule back to Islam. This is the verdict from Islam and as Jihadis we are required to accept the judgement of Allah (Subhanahu Wa ta�aala). The obligation lies on the Pakistani army to move and overthrow this illegitimate Pakistani regime (i.e. the Musharraf regime), and give its support (nussrah) to the sincere sons of this Ummah who are calling for the re-establishment of the Islamic Khilafah State which will work to reunite the land of Kashmir with the land of Pakistan and one day Insha-Allah, the whole of India. (Note that this view considers not just Kashmir as part of the “Islamic Khilafah State” but all of India as well.) Most recently, Altaf Qadiri, secretary general of the Hurriyat Conference’s Pakistan chapter was quoted by Pakistani newspaper Daily Times as having told reporters: “…The present government in PoK is worse than the Farooq Abdullah government (of Indian Kashmir)” (As reported on July 26, in the Indian Express).Note : Hurriyat Conference is widely perceived as being anti-Indian, and who for long was considered the main, even sole “legitimate” voice of the Kashmiri people ought to be the greatest indictment of Pakistan’s claim to be the greatest “upholder and champion of Kashmiri self-determination”. Contrary to all the rhetorical bombast, the Pakistani military is, in fact, one of the greatest hindrances to the realization of self-determination in multi-ethnic, multi-lingual and multi-religious Jammu and Kashmir.

1. There are evidences that the Jihadis in the Pakistan illegally Occupied Kashmir are Suffering more than those in India. 2. Maximum number of Jihadis in India and POK are in favour of the more benevolent Indian Rule. 3. No country can have the right to annexe another Country’s territory under pretext of Religious or Communal Majority alone. 4. In terms of Religious Majority, Pakistan itself has less Jihadis than in India. Hence, India should ideally annexe the whole of Pakistan if the logic of “Religious majority” holds good. 5. Hindus in Kashmir are getting killed for no fault of their’s by Islamic Jihadis from Pakistan.

8. The most important Conclusions :

1. The people of India can no longer depend upon the Government of India to free Kashmir once and for all from Islamic Terrorism. 2. It has become certain over the years that to rid Kashmir of Terrorism, people of India, especially Hindus, will have to themselves lift up the Shivadhanushya of Destruction of terrorists with the blessings of Saints and Deities.