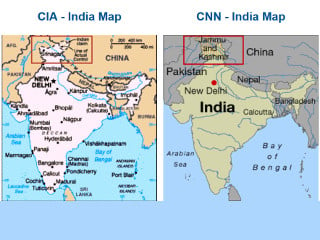 CIA’s map: Northern Kashmir is shown cut off from the state and the territory forming part of Pakistan and China. In the 1962 war, China illegally occupied “Aksai Chin”, the land rightfully belonging to India. Here CIA has referred to it as ‘Indian claim’.

CNN’s map: CNN has shown the entire state of Jammu and Kashmir as ‘Disputed’. This defies the partition of India and Pakistan in accordance with the ‘Indian Independence Act of 1st July 1947, passed by the British Parliament. 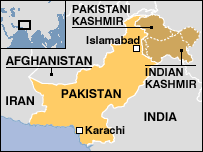 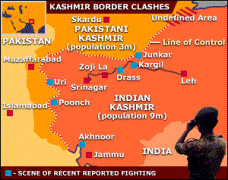 BBC’s map: Northern Kashmir is termed as “Pakistani Kashmir”. This land is well-knowned as Pakistan Occupied Kashmir (POK). But BBC has called it as “Pakistani” ie. belonging to Pakistan. Legally complete Jammu and Kashmir State belongs to India. Also BBC is silent about China occupied Kashmir.

Take a close look at the maps of Bharat (India) shown on the websites of CIA, CNN and BBC. Is this the true map of the state of Kashmir and the country, which you have learnt, visited since your schooldays?

CIA has published a ‘The World Factbook’ of the nations of the world. The distorted map of India as shown in this protest campaign is represented in this book. Most of the world’s famous websites, search engines universities like Texas etc refer to this map as a “legal” map of India. Almost 90% of the maps of India available around the world reflect this illegal and wrong version.

The partition of India and Pakistan occurred in accordance with the ‘Indian Independence Act’ passed by the British Parliament on 1st July 1947. There has been no alteration to the international borders set up in 1947 till date.

This is NOT a mistake due to ignorance!

Be aware of the threat to our country. If we do not stand now, it will be too late. Protect the territory and freedom. Mother India needs your support. Now is the time to make your choice. 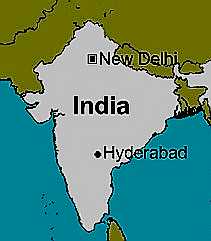 CNN had presented mischievous Indian map three times till date. They like to tease Indian map and play with it. Each time after a protest they safely take back the map and again present it in wrong sense. This map was published on 19 Feb 2002. It reflects the dream of Pakistan and clarifies that CNN is with them. 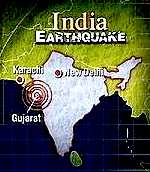 On January 26, 2001, FoxNews.com displayed India map without Kashmir in one of their news pages. This was an offending effort on India’s Republic day to create an impression that India does not include Kashmir. After very strong protest with FoxNews this map was withdrawn without any comments on Feb 1. There was another controversial map, showing whole of Kashmir as disputed territory. This too was withdrawn on the same day. 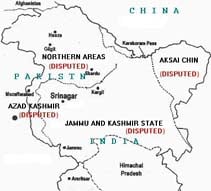 Microsoft MapPoint 2002, software providing geographic and demographic information, shows whole state of Jammu & Kashmir (J&K) as “DISPUTED” state of India. This is a very serious misrepresentation of J&K territory which is an integral part of India. This is exactly in line with Pakistan’s international propaganda. Not only J&K, but “Arunachal Pradesh” is also being shown as Disputed by Microsoft. 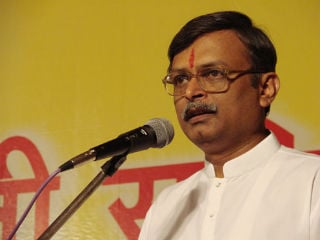 CIA, CNN, BBC joined the Pakistani propaganda! Introduction: Dr. Nand Kishore Department of Defence and Strategic Studies K.S.Saket P.G.College Dr.RML Avadh University FAIZABAD(U.P.) INDIA Opinion: The publication of distorted map of Kashmir by CIA, CNN and BBC on their respective websites is a deliberate attempt to attack the sovereignty of India. They have, in fact, … Read more 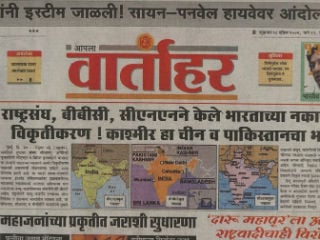 News in brief: Google altered the map of China showing Taiwan as separate country. Chinese people, government were not happy with changes and they reacted furiously and most important promptly. As a result Google has to revert the changes in China map. Read more »

The maps being published by respective agencies i.e. BBC, CIA, CNN reminds the episode of Sia-chin glacier problem. The agencies & media had shown Sia-chin glacier as a part of Pakistan during the eighties & the nineties, which provoked India to conduct the Military Operation MAGHDOOT under dynamic leadership of Gen.Sundarjee. Read more »