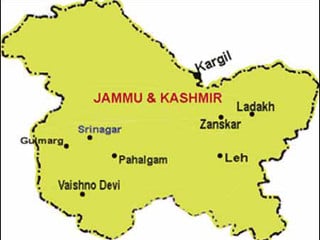 Various official documents clarify that Line of Control and International Border is different. We challenge CIA, CNN and BBC to prove the correctness of their maps on legal grounds.

A. UN on India Pakistan border

1. Refer the map of Asia available on website of United Nations (UN) The map clearly differentiate that LOC and Borders are different and no decision had been made over International borders due to disagreement of India and Pakistan. 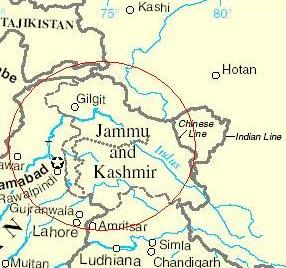 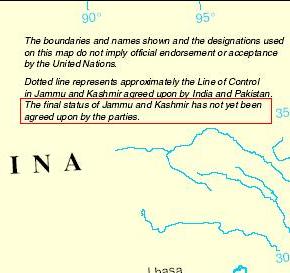 2. Source: http://www.un.org/Depts/dpko/dpko/co_mission/unipombackgr.html “On 20 September, after the hostilities had spread to the international border between India and West Pakistan, the Council adopted resolution 211 (1965), by which it demanded that a ceasefire take effect at 0700 hours GMT on 22 September 1965 and called for a subsequent withdrawal of all armed personnel to the positions held before 5 August.” “Since the hostilities extended beyond the Kashmir ceasefire line, the Secretary-General decided to set up an administrative adjunct of UNMOGIP, the United Nations India-Pakistan Observation Mission (UNIPOM), as a temporary measure for the sole purpose of supervising the ceasefire along the India-Pakistan border outside the State of Jammu and Kashmir.” Note: From UN report it is clear that ceasefire was due to crossing of international borders that means ceasefire line i.e. LOC is different from border.

Extract of Simla agreement pertaining to line of control

4. In order to initiate the process of the establishment of durable peace, both the Governments agree that: (i) Indian and Pakistani forces shall be withdrawn to their side of the international border. (ii) In Jammu and Kashmir, the line of control resulting form the cease-fire of December 17, 1971, shall be respected by both sides without prejudice to the recognised position of either side. Neither side shall seek to alter it unilaterally, irrespective of mutual differences and legal interpretations. Both sides further undertake to refrain from the threat or the use of force in violation of this line. Note – These main provisions in the Simla Pact mean “Armies of both countries will retreat to the international border. And in the context of Kashmir, the line of ceasefire declared on 17th December 1971 will be accepted by both countries and no unilateral changes will be made in the border.” (Reference: The Kashmir Problem, Dr. Jayant Balaji Athavale, Dr. Durgesh Shankar Samant )

Are CIA / BBC above the United Nations organisation ? 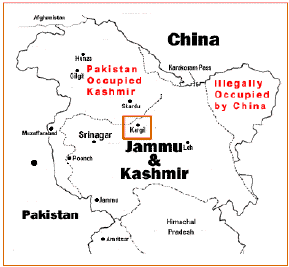 Refer to the following URL http://www.indianembassy.org/policy/Kashmir/kashmiraccession.htm

Instrument of accession of Jammu and Kashmir state to India

Jammu and Kashmir is an integral part of India by the ‘Instrument of Accession of Jammu and Kashmir State to India’. India objects to the word “DISPUTED” to J&K. Even the United Nations has never made a mistake of using the word “DISPUTED” in J&K map. In reality Pakistan was to have vacated J&K under the UN Resolution that it accepted but did not comply with. The only disputed territories are ‘Pak Occupied Kashmir (POK)’ and ‘China Occupied Kashmir (COK)’ and which are illegally occupied by Both Pakistan and China respectively.