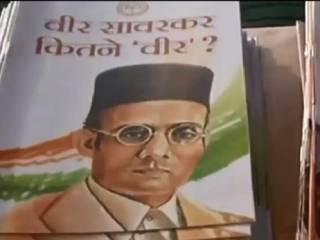 Hindu Janajagruti Samiti seeks immediate ban, throughout the country on the book containing filthy write up about #VeerSavarkar, and demands action on the book’s author and publisher !

Congress’ hatred for Savarkar is hatred for the entire revolutionary movement !

A book ‘Veer Savarkar Kitne Veer ?’ (‘Veer Savarkar, how ‘brave’ ?’) containing absolutely inferior and false write up related to Swatantryaveer Veer Savarkar was distributed at a training workshop organised by Seva Dal of Congress in Bhopal (M.P). It illustrates how low Congress can stoop to defame the freedom fighters ! The Central Government should take immediate steps and legislate an Act so that no one will ever dare insult not only Swatantryaveer Savarkar but also any national hero and freedom fighter. The book by Congress also appears to have a hidden agenda to create communal and caste tension to disturb the peace in the country.

Mr. Sunil Ghanvat, Coordinator of Hindu Janajagruti Samiti (HJS) for Maharashtra and Chhattisgarh has demanded an immediate ban on the objectionable book that clearly indicates Congress’s hatred towards Swatantryaveer Savarkar as well as the entire revolutionary movement. He added further than a strict action should be taken against the book’s author and publisher. An agitation to that effect was done under Rashtriya Hindu Andolan in Maharashtrian cities of Pune and Sawantwadi by various Hindu organizations. Many such organizations are being arranged in various Indian cities.

One wonders what these workshops by Congress must be teaching by distributing a book containing derogatory texts such as, ‘the freedom fighters were homosexuals’, ‘they threw stones on mosques’, ‘they raped women from the minorities groups’, etc. ? It proves that the workshops by Congress are nothing but training camps for teaching ways to disturb social harmony. It is unpardonable and intolerable that a great patriotic like Swatantryaveer Savarkar is constantly humiliated in public. It is as if anyone can tarnish his character. The Government should not test the patience of patriotic citizens in relation to these repeated incidents. Mr. Ghanvat demanded that Swatantryaveer Savarkar should be honoured with the highest award ‘Bharat Ratna’ immediately, and a strong action is taken against the culprits to make up for the insult caused to the image of Swatantryaveer Savarkar.

Incidents related to Swatantryaveer Savarkar described in this booklet

Various incidents related to Swatantryaveer Savarkar have been described in this booklet purposely to kick a row in this matter and it also appears that there might be a devious motive of creating communal disharmony.

Given below are few serious things noticed in the booklet …..

1. A totally false, baseless and contemptible claim has been made that Pundit Nathuram Godase and Swatantryaveer (Swa.) Savarkar had homosexual relations before Pt. Godase took oath of celibacy.

2. It has been stated in this book that Swa. Savarkar had thrown a stone at one mosque when he was 12 years old.

3. It has been stated with the purpose of creating communal disharmony that Swa. Savarkar was motivating Hindus to rape women from minority community.

How Congressmen, its office bearers or Party-president has insulted Swa. Savarkar ?

1. On 21st August 2019, Shri. Akshay Lakda, the Delhi-President of ‘National Students Union of India (NSUI)’, the Students’ organization of Congress and few anti-national activists of this organization had garlanded Swa. Savarkar’s statue with shoes and smeared the statue with black colour which was a very annoying and contemptible act and Delhi police had arrested few activists of NSUI in that connection.

2. Former president of Congress viz. Rahul Gandhi had made statements accusing Swa. Savarkar as a person who had sought pardon from British Government and Rahul Gandhi had also said that he was not Savarkar to run away.

3. During the regime of Congress-led progressive front Government at Centre, the then Union Minister Manishankar Iyer had removed the lines written by Swa. Savarkar at Cellular Cell of Andman jail.

1. The author, who has published such totally wrong and despicable information about Swa. Savarkar and Pt. Nathuram Godase, should be immediately arrested and a case of sedition should be filed against him.

2. Union Government should immediately impose ban on the book titled ‘Veer Savarkar- Kitane Veer?’ and withdraw all distributed copies of this book.

3. The Government should pass a law to prevent insult of not only Swa. Savarkar but any of our great national leaders in future; with a provision of severe action against such wrong and provision for filing case of sedition against the concerned person.