Former Congress president Rahul Gandhi on Saturday refused to apologise over his “Rape in India” remark and mocked Sangh ideologue VD Savarkar and said, “I am not Rahul Savarkar and I will not apologise for speaking the truth”. 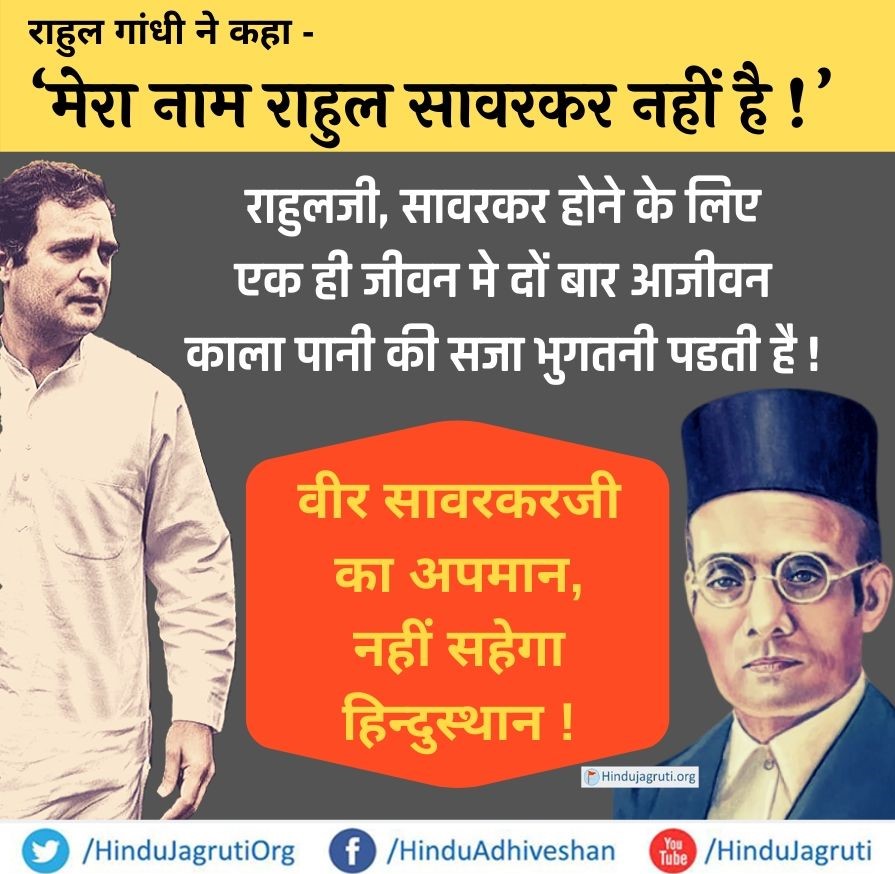 Rahul insults #VeerSavarkar again, says I am not Rahul Savarkar, I am Rahul Gandhi

The Lok Sabha on Friday burst into fierce attack by treasury benches on Rahul over his “Rape in India” remark, with all BJP members condemning the statement and seeking his apology.

Addressing the ‘Bharat Bachao’ rally at Ramlila ground in Delhi, Rahul Gandhi said — “Yesterday  in Parliament, the BJP people asked me to apologise . But I want to tell them that I am not Rahul Savarkar, I won’t apologise. I won’t apologise for speaking the truth.”

Veer Savarkar’s Mercy Petitions: Facts and Context above the Censure

Veer Savarkar has been much vilified for writing mercy petitions to the Colonial Government, most recently by Rahul Gandhi. However, those who attack Savarkar chose to neglect the essential historical context and strategy.

After being sentenced to Andaman, Savarkar gave up and repeatedly wrote amnesty petitions to the British

1. Veer Savarkar’s purpose was to escape the clutches of the British and rebuild the struggle (for independence)

In his autobiography Veer Savarkar himself has openly shared the fact that he had petitioned the British for release (from Andaman jail) several times but had never apologised for his actions (against the British) in any of his petitions. Savarkar was a barrister and there was nothing wrong in making attempts for getting released using the provisions of the prevalent (British) law at that time. He held that it was the duty of every revolutionary to keep trying to escape from the British and rebuild the struggle. He used to repeatedly express this view to the other fellow revolutionaries in the jail. The evidence of this is found from the great revolutionary Sachchindranath Sanyal. He had been awarded life imprisonment in the Lahore conspiracy case. Like Savarkar, he also got himself released on the promise of good behaviour only to earn life imprisonment once again, this time as the mastermind of the Kakori case. Sachchndranath writes in his autobiography, “Savarkar had also promised cooperation (with the British government) like me. I was released but not Savarkar. Why? Because the government feared that if Savarkar was released there may be another round of revolutionary upsurge in Maharashtra” (Pg. 226, Bandijeevan).

2. The content of Veer Savarkar’s petitions was a part of his (long term) strategy (for struggle against the British rule) !

The Week has published the petition made by Veer Savarkar in November 1913. There is no mention of any regret or apology (for his actions against the British government) in that letter. He had a discussion with Sir Reginald Craddock before submitting this petition to him. Sir Cradodck, while forwarding the same to the government, has clearly stated that “It cannot be said to express any regret or repentance”. But Niranjan Takle has conveniently dropped this particular statement. This action (of Mr Takle) clearly shows that his is no attempt at any sort of research but a blatant act of misleading the readers by selectively using facts to his advantage. To decide whether Savarkar was mentally broken down in the jail or not, or whether the petitions he made for release from jail were a part of some long term plan; a historian has to study the writings of his fellow inmates or the jail records. Shree Takle has done nothing of the kind. The writings of other great revolutionaries in their autobiographies who were fellow inmates of Savarkar such as Ullaskar Dutt, Bhai Paramanand, Pruthvi Singh Azad and Ramcharan Sharma make Savarkar’s intentions abundantly clear.

Veer Savarkar : A visionary, revolutionary patriot and a brilliant personality !

Living without you is death!!

Veer Savarkar’s name has been carved in golden letters not only in the history of India but also in the history of the world ! The nation was his whole and soul; therefore, the extraordinary literature he created has the national interest at heart. There have been many a litterateur and even several revolutionaries; but there is no revolutionary litterateur like Veer Savarkar !

Ranjit Savarkar, grandson of the Hindutva icon, on Sunday said that he will file a defamation case against the Gandhi scion.

“Jawaharlal Nehru once called Shivaji a ‘lootera’ but later apologised for his comment. He is repeating his family’s mistake,” Ranjit Savarkar added.

In an interview with India Today TV, Ranjit Savarkar appealed to Uddhav Thackeray and Narendra Modi to take strong action against Rahul Gandhi