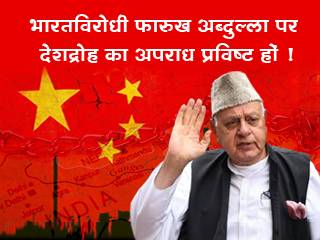 Former Chief Minister of Jammu & Kashmir and the President of (anti) National Conference, Farooq Abdullah is again in the news for his anti-India views and for singing laurels of our enemy country. In an interview to The Wire, web portal Abdullah said that ‘Kashmiri people do not feel and do not want to be Indian; they’d rather have the Chinese rule them’. Abdullah has time and again issued pro-Pakistan statements as well as statements in support of terrorists to provoke Kashmiri Muslims against India. After the abrogation of Article 370, all efforts are made to integrate Kashmir into the Indian mainstream; but Abdullah’s malevolent statements are encouraging separatism. India’s relations with China are quite strained, so Abdullah’s statements are do not reflect his stature as an MP; however, they seem more like someone an agent of an enemy nation would say. Therefore, to maintain the integrity of this nation, it is necessary to take stringent action against people who make anti-national statements.

Request you to please send the email with this demand to Hon’ble Prime Minister and  Hon’ble Minister for Home Affairs by clicking on the below button. Request you to send a copy of the email to [email protected]
(Note: ‘Send Email’ button will work only on Mobile. Also please update your Email App to ensure proper working of email petition)

1.While opposing the abrogation of Article 370, Abdullah had created a ruckus claiming that Kashmiri people didn’t consider themselves as part of India.

2. He had also said that PoK (Pak-occupied Kashmir) did not belong to India. He had tried to portray terrorists as martyrs fighting for freedom while justifying terrorists’ activities.

3. In 2017, he had challenged the Union Government to hoist the National Flag in Srinagar’s Lal Chowk.

4. On 28th March 2019 Abdullah raised a storm by questioning the martyrdom of 40 Indian soldiers win the Pulwama suicide bombing attack.

5. On 10th January 2019, he had said that Kashmir would keep on burning till Kashmiri people were deprived of justice and even India would get scalded. We wouldn’t burn alone. If we drown, we would take you with us.”

6. He had said on 9th September 2018 that security agencies were spreading hatred throughout Kashmir.

We place the following demands before you :

1. Farooq Abdullah’s Membership of the Parliament should be immediately disqualified.

3. All decisions taken during Abdullah’s regime should be re-investigated.

India would be the only country where its elected MP can make such statements and can roam freely anywhere. Indians feel that either such people should be deported from India permanently or they should prosecuted for their anti-national statements ! – Editor, Hindujagruti 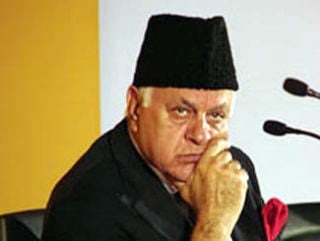 Former Jammu and Kashmir chief minister and National Conference (NC) president Farooq Abdullah who, according to his critics, has as a politician grown accustomed to setting off controversies, said in his latest harangue that the people of Kashmir do not feel Indian and do not want to be as such.

“Today Kashmiris do not feel Indian and do not want to be Indian. They are slaves. They would rather have the Chinese rule them,” he said in an interview to veteran journalist and television commentator Karan Thapar.

Reacting sharply to the government’s doing away with the ‘1927 State Subject Law’ and replacing it with new domicile law in what is now called as the Union Territory of Jammu and Kashmir, Abdullah said, “Every Kashmiri believes the new domicile laws are intended to create a Hindu majority. The gap between  Kashmiris and the rest of the country is wider than ever before and growing.” He added that alleged attempts to change the demography of J&K have further embittered the Kashmiri people.