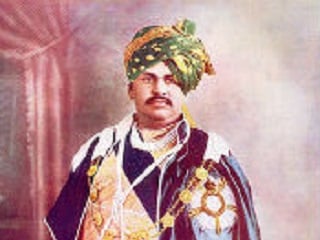 This is the story of Chhatrapati Rajaram Maharaj’s great campaign of Gingee; his struggle against the Mughals and his legendary escapades.

Aurangzeb the Mughal king decided that after the Adilshahis and the Qutubshahis he had to put an end to the Maratha sovereignty. He started by cruelly killing Sambhaji Maharaj after a week long torture. The Mughal army surrounded the Maratha strongholds and pillaged them. The Mughal commander Zulfikhar Khan laid siege on the Maratha capital Raigadh.

It was during this grave time that Rani Yesubai decided to crown Rajaram Maharaj and gathering all her Chief officers crowned Rajaram as ‘Chhatrapati’ following all religious ceremonies. With this she sent out a strong message to the detractors that the Maratha empire was still strong and capable of putting up a fight. The entire power base of the Marathas had gathered in Raigadh for the crowning. This would prove fatal if the Mughals attacked, hence a plan was formed to disperse everyone. Rani Yesubai suggested that Rajaram Maharaj should fight his way out to different strongholds. In case of difficulties on the way they can go to Gingee in Karnataka. Such was the advice of Yesubai. Accordingly Rajaram Maharaj went to Pratapgarh. From Pratapgarh he went to Sajjangadh, Satara, Vasantgarh and reached Panhala fort. He was relentlessly pursued by the Maratha army. In a short while the Mughals also surrounded Panhala too. A question of the future of Swarajya arose, so Rajaram Maharaj decided to move to Gingee on the advice of his chiefs.

3. Aurangzeb pits his wits against Rajaram

Aurangzeb was bent upon capturing Rajaram, who was equally determined to fool the enemy and reach Gingee. The shrewd Aurangzeb knew that the newly coronated Rajaram would go to Gingee. He had ordered a strict vigil on all routes going to Dindi. He had also enlisted the help of the Portuguese viceroy form Goa to ensure that Rajaram would keep clear of the sea.

Rajaram simply changed his route and instead of going South he went to the East. A ploy that was earlier used by Shivaji while escaping from Agra. Panhala Fort was besieged by the Mughals. On 26.09.1689 Rajaram Maharaj and his aides escaped from the fort in the guise of Lingayat merchants. Mansinh More, Prahlad, Niraji Krishnaji Anant, Nilo Moreshwar, Khando Ballal, Baji Kadam accompanied him and by sunrise they reached Nrusimhawadi on the banks of Krishna river.

They crossed the river Krishna and took the road towards Deccan because to go to Gingee he had to cross Krishna one more time. They used this roundabout way to fool the enemy. Maharaj’s travel to Shimoga was via Gokak, Savadatti, Navalgund, Anegari, Laxmiswar, Haveri and Hirekerur.

Soon the Mughals came to know of this escape. Aurangzeb himself took charge of the mission of capturing Rajaram. Rajaram had earlier already sent many of his officers like Bahirji Ghorpade, Maloji Ghorpade, Santaji Jagtap, Rupaji Bhonsle away who now assisted him. During this escape he was surrounded by enemies at the river Vardha but Maharaj escaped again with the help of Bahirji and Maloji. When some Mughals accosted him again Rupaji Bhonsle and Santaji Jagtap showed their valour with the long sword and helped Rajaram escape. Soon Maharaj sent Santaji ahead and Rupaji behind to protect him and proceeded. And fooling the Mughal soldiers by various means he reached the shores of river Tungabhadra.

Rajaram reached the kingdom of Rai Chennamma and met her in Bidanoor. She was all aware of the efforts of Shivaji Maharaj in trying to establish the Hindavi Swarajya and safeguarding the land and culture from the Mughals. She obeyed her conscience to save Hindu Dharma, while disregarding the consequences of Aurangzeb’s wrath. Rani Chennamma arranged the secret departure of Rajaram Maharaj. And it is because of her selfless help the Maharaj reached Shivamogga on the banks of Tungabhadra river. Aurangzeb learned about this and immediately sent a vast force to punish Rani Chennamma, but Santaji Ghorpade waylaid the Mughal force and came to the Rani’s aid.

6. Rajaram and the Marathas ambushed

Maharaj and his aides stayed on the banks of river Tungabhadra. At night they were attacked by the Mughal army lead by Subhedar Sayyad Abdulla Khan of Bijapur. Khan, on the orders of Aurangzeb, rode on for 3 days and 3 nights to get to Rajaram and then attacked him. The Marathas were alerted to the Mughal presence and fought bravely to ensure their King’s safety.

7. Soldier posing as Rajaram gives himself up to the Mughals

In the ensuing melee many Marathas died many more were imprisoned. The Khan thought that one of the prisoners was Rajaram. The jubilant Mughals sent word to Aurangzeb who promptly sent an officer to bring Rajaram to his court. But soon Abdul Khan found out that he was deceived. The imprisoned person was not Rajaram Maharaj. Earlier Shivaji Maharaj also had similarly deceived the Mughals through the help of Kashid.

In the saga of sacrifices there are examples of such brilliant acts, of impersonators saving their Kings. Kudos to this brave unknown soldier and many others like him who have made this land proud with their selfless action.

The Mughals stationed their spies on all the roads through which the King and his men were likely to travel through. Rajaram Maharaj and his men had travelled on horses till Shivamogga. But the Mughal network of spies deterred them from using horses on the journey ahead. Therefore they continued as ordinary travellers, ascetics, Saints, merchants, beggars etc. They managed to avoid the Mughal checkpoints and by giving the Mughals a slip reached Bengaluru, 300 kilometres away.

In Bangalore one more incident happened which went against the Marathas. An aide was washing Rajaram Maharaj’s feet and some locals saw it. The news, that an important and high ranking Maratha had arrived, spread like wild fire, and reached the local Mughal Thanedar. Now this alerted the Marathas. Khando Ballal a Maratha officer requested Rajaram Maharaj to gather his officers and leave by different routes. Khando Ballal and few others would stay back to keep the Mughals at bay. When the Thanedar came to inquire, he found that the Maharaj had left, so he clapped Khando Ballal and others in chains.

10. Punishment and torture could not

overcome the loyalty of Khando Ballal and others

In the Mughal custody Khando Ballal and the others were severely tortured. They were beaten mercilessly. Heavy stones were placed on their heads. But they steadfastly maintained that they were innocent travellers. The Mughals who decided to let them go. These brave warriors suffered such severe punishment and torture for the love of the Hindavi Swarajya and loyalty to their King. This is one of the extraordinary examples of the faithfulness and love of one’s country.

Gingee fort (now in Tamil Nadu) was the centre of the Maratha Kingdom in the Deccan. Shivaji Maharaj himself had conquered this fort and had made it impregnable. It was to provide refuge to any Maratha who was facing danger. In fact when Aurangzeb invaded Deccan Shivaji Maharaj himself availed of the safety and security of Gingee fort. Another obstacle stared at the Maharaj and his men, his own half-sister!

During the times of Sambhaji Raje, Shri Harjiraje Mahadik was the Chief Subedhar of Marathas in Karnataka. Ambikabai, his wife was Rajaram Maharaj’s half sister. After Hariraje died, she had taken over the fort of Gingee. When she learned about Rajaram Maharaj’s plan to use the fort, she decided to oppose him and began her preparations for war. However, neither the people nor her advisers were in favour of this. Ambikabai had to open the gates of Gingee fort to Rajaram Maharaj. In the first week of Nov. 1689 Rajaram Maharaj reached Gingee fort with his retinue. Thus ended the saga of Maharaj’s travels.

The grand welcome accorded to Rajaram in Gingee by Marathas had an electric effect on the east coast. The new Maratha King opened his new capital in Gingee and a new cabinet was formed. It was the herald of a new age of Marathas.

The Mughals were being harassed to no end by stalwart guerrilla fighters like Santaji and Dhanaji. Aurangzeb sent Zulfikhar Khan to attack Gingee and get hold of Rajaram Maharaj. In 1690 Khan surrounded Gingee and for close to 8 years tried to breach the fort. Warriors like Ramchandra Pandit, Sankaraji, Narayan, Santaji, Dhanaji and others under the leadership of Rajaram put up a tough fight. The Marathas were continuously moving about from Nasik to Gingee. Zulfikhar Khan conquered Gingee in 1697, but not before Rajaram left the fort and went to Maharashtra to further challenge the Mughals. Sadly Rajaram Maharaj’s health suddenly deteriorated and he died in Sinhagad on the 9th day of the Falgun month in the year Saka 1621.