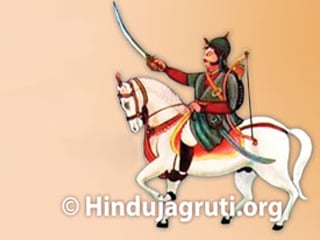 Budelkhand Kesri Maharaja Chhatrasal (4 May 1649 – 20 December 1731), was a Bundeli warrior who chose to turn against the Mughal Emperor Aurangzeb and seek to establish his  own kingdom in Bundelkhand. His father had raised the banner for freedom a generation earlier but was killed in battle with the Mughals after himself killing the favourite of the emperor, Abu Fazl.

He was born in Kachar Kachnai on the 4th of May in 1649, to Champat Rai and Lal Kunwar. Chhatrasal raised the banner of revolt against the Mughals in Bundelkhand at the age of 22, with an army of 5 horsemen and 25 swordsmen, in 1671. During the first ten years of his revolt he conquered a large tract of land between Chitrakoot and Panna on the east and Gwalior on the west. His domains streched from Kalpi in the north to Sagar, Garah Kota and Damoh in the south. Some of the Mughal generals who were defeated by him were Rohilla Khan, Kaliq, Munawwar Khan, Sadruddin, Sheikh Anwar, Sayyid Latif, Bahlol Khan and Abdus Ahmed.

Chhatrasal was a disciple of Pran Nathji and accepted him as his guru and accepted Pranami Dharma.  That was Swami Pran Nathji who told Raja Chhatrasal Bundela, a great medieval warrior regarding Diamond mines of  Panna  and  thus  strengthened  his  financial position.  He also persuaded Chhatrasal to make Panna his capital and arranged his coronation there.

Bundelkhand : The land of warriors

The freedom loving people of Bundelkhand however refused to submit ‘Jizyah’ tax or Islamic toll tax and kept raising their heads and fought for freedom.  A deadly struggle, which eventually spread over nearly fifty years, then ensued with wave after wave of Mughal and Pathan attacks over the land being beaten back. Each successive invasion brought with it the desecration of Hindu temples and population, including cold-blooded murder of unarmed civilians, the rape of women and slavery for captured women and children.  This only redoubled the Bundela intensity for the fight for freedom and vengeance.

The ‘Jizyah’ tax or Islamic poll tax upon the Hindus was imposed by the Mughals. The Maulvis who came to collect Jizyah in Orchha, the capital of Bundelkhand, had their severed heads sent back to the Emperor with pages of the Koran stuffed in them as a sign of the Bundelas contempt for the Mughal’s fanaticism.  The emperor himself led a huge expedition to Bundhelkhand to smash the ‘idol worshippers’ in 1684 but was forced to retreat without achieving any lasting successes, leaving behind trails of horror and destruction but still failing to subdue Chatrasal and the Bundelas.

From there onwards the Maratha attacks began to shake and then crumble the Mughal empire and, following the death of Aurangzeb, the Bundelas steadily began to gain ground over their Muslim adversaries.  The cream of the Mughal generals were sent one after the other to subdue the Bundelas but all their campaigns ended up in failure.

Shivaji was already the most celebrated and heroic Hindu figure of his times, who had faced the Mughals on equal terms and whose exploits and achievements, courage and idealism had won for him respect throughout India. Chhatrasal offered to serve Shivaji in latter’s war against Aurangzeb. But Shivaji suggested to him to open hostilities against Aurangzeb in Bundelkhand where he would gain many adherents. “Illustrious Chief! Conquer and subdue your foes. Recover and rule your native land …”, Shivaji advised him.

In the second phase of his struggle between 1681 and 1707, Chhatrasal suffered a few reverses. Due to Aurangzeb focusing his main military efforts on extending his domain into the Deccan, Chhatrasal did not have to face the full military might of the Mughal Empire.

Association with Peshwa Baji Rao I

Maharaja Chhatrasal captured Mahoba in 1680. Upon his death on the 20th of December 1731, Chhatrasal bequeathed Mahoba and the surrounding area to the Maratha Peshwa Baji Rao I in return for Baji Rao’s assistance against the Mughals.

End of great warrior giving sovereignty to his land

In years to come, Chhatrasal kept a non-stop war against the Mughals in Bundelkhand, earned great respect and renown for his independent spirit, sense of honour, and love for his land and freedom, and finally carved out an independent state with its capital at Panna. When his eventful 81 years long life came to an end in 1731, the Mughal rule from Bundelkhand had been wiped off.

Eventually in a last desperate attempt the famous Pathan warrior Muhammad Khan Bhangash was sent with his fighters in 1730 and engaged in a final struggle.  The now aged Chatrasal with his sons and warriors drew the Pathans into battle and with the help of the Maratha Peshwa Baji Rao they won a final victory over the Mughals in 1730 expelling them finally from their lands.

An inspiration to successive generations of Hindus and an apt lesson that freedom is not something that can ever be taken for granted but must be maintained by endless and continuous vigilance.  It shows us that the endless waves of cruelty and barbarity unleashed on the Hindus failed to destroy or subdue their innate love for freedom and dharma.