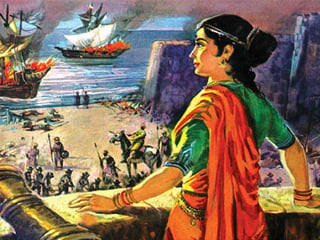 Abbakka Rani or Abbakka Mahadevi was the queen of Tulunadu who fought the Portuguese in the latter half of the 16th century. She belonged to the Chowta dynasty who ruled over the area from the temple town of Moodabidri. The port town of Ullal served as their subsidiary capital.

The Chowtas followed a matrilineal system by which Tirumala Raya, Abbakka’s uncle, crowned her the queen of Ullal. He also forged a matrimonial alliance for Abbakka with Lakshmappa Arasa, the powerful king of neighbouring Mangalore. This alliance was to later prove a source of worry for the Portuguese. Tirumala Raya also trained Abbakka in the different aspects of warfare and military strategy. The marriage, however was short lived and Abbakka returned to Ullal. Her husband thus longed for revenge against Abbakka and was to later join the Portuguese in their fight against Abbakka.

The Portuguese made several attempts to capture Ullal as it was strategically placed. But Abbakka repulsed each of their attacks for over four decades. For her bravery, she came to be known as Abhaya Rani (‘The fearless queen’).] She was also one of the earliest Indians to fight the colonial powers and is sometimes regarded as the ‘first woman freedom fighter of India’.

Rani Abbakka, though a Queen of a little known small princely state, Ullal, was magnetic woman of indomitable courage and patriotism. While Rani of Jhansi has become a symbol of courage, Abbakka, nearly 300 years her predecessor, has been largely forgotten by history. Her furious wars with Portuguese are not well recorded. But whatever is available speaks of a luminous personality of awesome valour and bravery.

According to local legends. Abbakka was an extraordinary child and as she grew up showed signs of being a visionary. there was no equal to her in military science and warfare, mainly in archery and sword fighting. Her father encouraged her in this and after she was well versed in all areas, she was married to a neighbouring local king of Bangher. The marriage did no last long with Abbakka breaking the ties by returning the jewels given by him to her. The husband thus nurtured revenge against Abbakka and later on joined the Portuguese in a treaty, to fight Abbakka.

Ullal fort, the capital of Abbakka’s kingdom, is located just a few kilometers away from the city of Mangalore, on the shores of the Arabian Sea. It is a historical as well as a pilgrim spot because of the beautiful Shiva Temple built by the Queen and a unique natural rock, called the Rudra Rock. The rock appears to change colours every second, as the sweater splashes on it.

After overrunning Goa and taking control of it, the Portuguese turned their attention southwards and along the coast. They first attacked the South Kanara coast in 1525 and destroyed the Mangalore port. Ullal was a prosperous port and a hub of the spice trade to Arabia and other countries in the west. Being the profitable trading center that it was, the Portuguese, the Dutch and the British vied with one another for control of the region as well as the trade routes. They however, had not been able to make much headway as the resistance from the local chieftains was very strong. The local rulers even forged alliances cutting across caste and religion lines.

Though Abbakka was a Jain by faith, her administration was well represented by Hindus and Muslims. Her army too consisted of people of all sects and castes including the Mogaveeras, a fisher folk community. She even forged alliances with the Zamorin of Calicut and other Muslim rulers south of Tulunadu towards this end. Together, they kept the Portuguese at bay. The marital ties with the neighboring Banga dynasty added further strength to the alliance of the local rulers.

The first attack by the Portuguese in south Kanara coast was in 1525, when they destroyed the Mangalore port. Rani Abbakka was alerted by the incident and started preparing herself to protect her kingdom.

The Portuguese, clearly upset by Abbakka’s tactics, demanded that she pay them tribute but Abbakka refused to yield. In 1555, the Portuguese sent Admiral Dom Álvaro da Silveira to fight her after she refused to pay them tribute. In the battle that followed, Rani Abbakka once again managed to hold her own and repulsed the attack successfully.

In 1557, the Portuguese plundered Mangalore and laid it waste.

In 1558 the Portuguese Army perpetrated another wanton cruelty on Mangalore, putting to death a number of men and women, both young and old, plundering a temple, burning ships and finally setting the city itself on fire.

In 1568, João Peixoto, a Portuguese general and a fleet of soldiers where sent by the Portuguese Viceroy António Noronha. They managed to capture the city of Ullal and also entered the royal court. Abbakka Rani, however, escaped and took refuge in a mosque. The same night, she gathered around 200 of her soldiers and mounted an attack on the Portuguese. In the battle that ensued, General Peixoto was killed,seventy Portuguese soldiers were taken prisoners and many of the Portuguese retreated. In further attacks, Abbakka Rani and her supporters killed Admiral Mascarenhas and the Portuguese were also forced to vacate the Mangalore fort.

In 1569 however, the Portuguese not only regained the Mangalore fort but also captured Kundapur (Basrur). Despite these gains, Abbakka Rani continued to remain a source of threat. With the help of the queen’s estranged husband, they mounted attacks on Ullal. Furious battles followed but Abbakka Rani held her own. In 1570, she formed an alliance with the Bijapur Sultan of Ahmed Nagar and the Zamorine of Calicut, who where also opposing the Portuguese. Kutty Pokar Markar, the Zamorine’s general fought on behalf of Abbakka and destroyed the Portuguese fort at Mangalore but while returning he was killed by the Portuguese. Following these losses and her husband’s treachery, Abbakka lost the war, was arrested and jailed. However, even in prison she revolted and died fighting.

According to traditional accounts, she was an immensely popular queen and this is also attested by the fact that she is even today a part of folklore. The queen’s story has been retold from generation to generation through folk songs and Yakshagana, a popular folk theatre in Tulu Nadu. In Bhuta Kola, a local ritual dance, the persona in trance recounts the great deeds of Abbakka Mahadevi. Abbakka is portrayed as dark and good looking, always dressed in simple clothes like a commoner. She is portrayed as a caring queen who worked late into the night dispensing justice. Legends also claim that Abbakka was the last known person to have the used the Agnivana (fire-arrow) in her fight against the Portuguese. Some accounts also claim that she had two equally valiant daughters who fought alongside her in her wars against the Portuguese. Tradition however treats all three – mother and two daughters as the same person.

Abbakka’s memory is much cherished in her home town of Ullal. The “Veera Rani Abbakka Utsava” is an annual celebration held in her memory. The Veera Rani Abbakka Prashasti(award) is awarded to distinguished women on the occasion. On January 15, 2003, the Indian postal department issued a special cover on Rani Abbakka. There have been calls to name the Bajpe airport and a naval vessel after the queen.A bronze statue of the queen has been erected in Ullal and another in Bangalore.The Karnataka Itihasa Academy has called for renaming the Queen’s road in the state capital as ‘Rani Abbakka Devi road’.