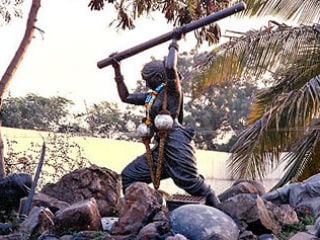 Chitradurga Fort is renowned for its Kallina Kote / Ukinna kote / Yelu Suttina kote which were built in parts by the Palegar Veer Madakari Nayaka. It comprises a series of seven enclosure walls in Kannada. Eighteen ancient temples can be found inside the fort. The Fort of Chitradurga with seven circumambulations surrounds the seven hills of Chinmuladri range. Actually the construction of this fort started during 10th Century AD and completed in 18th Century AD during the rule of Palegars. According to an estimate the total length of the fort is about 8 Kms. This fort as 19 gateways, 28 postern gates, 35 secret entrances, 4 invisible entrances, 50 warehouses, apart from other monuments.

Madakari Nayaka ruled Chitradurga.  Hyder Ali, the ruler of Mysore wanted to besiege the fort of Chitradurga.  But many trails went in vain and he was unable to occupy this fort. A chance sighting of a woman entering the Chitradurga fort through an opening in the rocks led to a clever plan by Hyder Ali to send his soldiers through the hole.

Wife of a soldier called Kalanayak was guarding a fort tower, substituting for her husband during a lunch break.  Her name was Obavva. She was guarding the Chitradurga Fort at a crack opening, a secret opening (where only one person could barely squeeze through).  While fetching water, she heard the muted sounds of enemy soldiers attempting to enter the fort through the crevice. With great presence of mind she immediately hid behind the crevice in the fort and hit at each soldier trying to squeeze through the crevice with Onake, the name given in Kannada to a masse or pestle, a wooden rod used for pounding paddy. In this process, she bravely killed several enemy soldiers. By the time her husband appeared on the scene, she had already dragged several bodies of dead soldiers into the fort wall and was standing around the dead bodies with the blood stained Onake in her hand. Kalanayak blew the bugle when other soldiers also joined him and killed all the enemy soldiers. This brave act saved the fort on that day from further attacks by Hyder Ali’s soldiers. Her heroic act has been commemorated with her impressive statue erected in front of the District Commissioner’s office in Chitradurga town. The stadium in the town has also been named after her. This act also earned her the epithet Onake Obavva and the crevice in the fort where she showed her bravery is called Obavvana Kindi. However, in the battle for the fort, Madakari Nayaka V lost and Chitradurga fort eventually fell to Hyder Ali, in 1779.