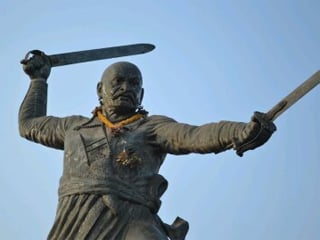 Today we Hindus are in dire need of Kshatriya ( Warrior ) pride which the leaders of today, save a few noteworthy exceptions, shamefully lack.

For any true Hindu and a lover of Bharath Varsh, the study of Chhatrapati Shivaji Maharaj’s life is awe-inspiring.  Over and above being a great and ferocious warrior and in many ways a fore-runner in counter-Jehadi-terrorism  in 17th century Bharath, Shivaji was a devoted son to his mother Jijau , a devoted Seeker (Bhakt) of Goddess Bhavani, and a champion protector of the weak and innocent. The daring exploits of this proud Maratha warrior king are extra-ordinary.

And in many of his exploits, Shivaji Maharaj had the valiant support and extraordinary sacrifices of his courageous men, who put the command and the dream of their leader for establishment of HINDAVI SWARAJ (Hindu Kingdom) over and above everything else they cherished and that included their personal possessions and families and one such extraordinary warrior was the great Baji Prabhu Deshpanade, the one such brave heart who selflessly sacrificed his life to save life of his king Chattrapati Shivaji Maharaj.

The battle of Pavan Khind

The post-Afzal-Khan slaying, Shivaji Maharaj and his men created havoc (“NAAK-MEIN-DUM“) on Adilshah’s powerful forces and harried and tormented them relentlessly with their ferocious guerilla tactics.  Unleashing fierce counter-terrorism backed by good intelligence, the Marathas were a succor to all those suffering Hindu innocents on whom Adilshah’s jihadi army rained callous terror without respite like a never-ending nightmare.  And it was during these days that Shivaji Maharaj and his men had based themselves at the Panhala fort.  The Jehadi army of Adilshah came to know of this and immediately laid siege to the fort under the able command of general Siddi Johar.  The siege lasted for many months and Siddi Johar was getting increasingly successful in cutting off  vital supplies to the Panhala fort and thereby forcing Shivaji Maharaj’s hand.  He had to get out of there and he had to get out soon.

All attempts to raise the siege were foiled. Even Shivaji Maharaj’s senapati (Commander) Netaji Palkar could not break through the siege from outside. Hence Shivaji Maharaj decided to give a final battle. But instead of suicidal attack, he followed a different strategy. A grand escape was planned to give a battle from the fort Vishalgad.

Firstly, Shivaji Maharaj sent his vakil (lawyer)l to Siddi Jauhar saying that he was ready to sign a treaty with him. Siddi Jauhar and his army thus relaxed a bit, foreseeing that their siege going on for months together was going to end. Still, getting through the siege of about 10000 Adilshahi soldiers seemed impossible.

According to the plan on a stormy full moon’s night (night of Guru Pournima, Ashadh Vadya Paurnima) a band of 600 select men set out, led by Baji Prabhu and Shivaji Maharaj. They split up into two groups.  One was a decoy that was led by a man called Shiva Navi, who resembled Shivaji Maharaj very closely and the other led by Shivaji Maharaj and this group also consisted the valiant Baji and other brave Marathas.  Shiva Nhavi’s group served as the perfect bait as Siddi Johar’s alert troops who had gotten wind of the escape plan through their network of informers.  The Jehadis captured Shiva Navi to their undiminished glee but were terribly enraged when they discovered the subterfuge that it was fake Shivaji (Nakli-Shivaji). They promptly beheaded Shiva Nhavi (This valiant sacrifice by Shiva Nhavi for his master brought some much needed valuable time for the escaping Maratha warriors) and the Mugals immediately set in hot pursuit of the real shivaji (Asli-Shivaji).

A 4000 plus strong Jihadi Mugal army ignited the chase while Shivaji Maharaj and his men had already set up an electrifying pace on their horses. The Maratha warriors tore through the rainy night as they burnt up the miles on their horse backs, pushing their steeds to the limit.   And then the horses had reached exhaustion point, the sweat lathering of their backs as they reached the  Ghod Kind pass (to be renamed as Pavan Kind by Shivaji Maharaj), a narrow opening which could let in only a few men at a time.

The Towering stand of the mighty Warrior

This is where the legend began and Baji Prabhu volunteered to hold the pursuing Jihadis at the pass with a select band of some 300 Marathas, so that Shivaji Maharaj could proceed on to the safety of Vishalgad fort.  A reluctant Shivaji Maharaj proceeded with a heavy heart with the rest of the band of 300 Marathas. It was agreed that three cannon shots would be fired as a signal to Baji and his men that Shivaji Maharaj and his group had reached their destination safe and sound.

And here at Ghod Kind the brave Marathas faught like caged tigers to their fabulous war cry: HAR HAR MAHADEV. It was a bloody battle by all accounts.  Baji and his men were vastly outnumbered, almost 1:100 ratio by the hysterical Jihadis baying for their blood.  The Jihadis, in turn, were relentless as they attacked the narrow pass in wave after frenzied wave.  But Baji Prabhu in the vanguard was like a granite boulder.  Wielding two huge and very heavy swords, one in each hand, he almost single handily repulsed the waves, using his body as a wall to prevent the Jihadis from getting through. And he paid a heavy price indeed for this and very soon his body was crisscrossed by grave injuries:  sword cuts, spear thrusts. At times it seemed that he would buckle in to his injuries and pass out but with iron will summoned from the very depths of his soul, he stood firm and kept on fighting.  Baji would not quit till he had heard the cannon shots.

When Shivaji Maharaj approached Vishalgad with 300 Maratha soldiers. the fort was already under seige by another Mughal sardar named Surve. Shivaji Maharaj with his 300 men had to defeat Surve to reach the fort. Shivaji Maharaj attacked the base of fort Vishalgad with such vigour that it was broken. After what seemed like an eternity to Baji and his Marathas, the much awaited cannon-shots boomed from the distant Vishalgad.  It was almost dawn and Baji was still on his feet but barely and that too in mortal danger because of his wounds.  With another cry of HAR HAR MAHADEV, Baji’s’ men cleared the pass, carrying their wounded leader with them.  And then the valiant Bajiprabhu Deshpande passed away with a smile on his face, secure in the knowledge that Shivaji Maharaj had reached Vishalgad and in the process forever glorifying the annals of Maratha history and Hindu Bharath. There Baji enabled Shivaji Maharaj & the Hindavi Swarajya to survive and prosper against heavy odds.

Shivaji Maharaj was with heavy heart when he came to know about the death of Baji, a soul-tugging emotion that he would hold on for the rest of his life.  In Baji’s honour, he renamed the Ghod-kind pass as Pavan-Kind (Pavan meaning pure, purified by the blood of this great Maratha Hindu martyr.)   For the rest of his life, Shivaji Maharaj would also act as the guardian for Baji’s children.

The sword of honour was given to Bandal sena( Maratha Warriors)  who fought vigorously with Bajiprabhu Deshpande. Shivaji Maharaj personally visited the house of slain Baji Prabhu, situated in the village of Kasabe Sindh near Bhor in the Pune district. His elder son was offered job as chief of a section. Other 7 sons were given honour of the Palkhi. Son of Slain Sambhaji Jadhav, Dhanaji Jadhav was inducted in the forces. Shivaji Maharaj also gave “manache pahile paan” (“Honor of the Court”) to Baji Prabhu’s family.

The sacrifice of Bajiprabhu Deshpande and Shiva barber is a legend itself. Even today many youths from Maharashtra trek on the route taken by Shivaji Maharaj between the forts of Panhala and Vishal Gadh. The distance is around 70 km. The battle of Pavan Khind (Panhala) has been recited as folklore in Maharashtra in many awe-inspiring renditions.