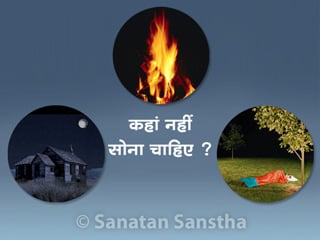 Sleep is as essential as food for physical and mental well being. The body and the organs wear out after a day’s work. Following norms as described in the scriptures for sleeping will help us obtain a peaceful sleep. Just as we look around for basic requirements while sleeping like, looking for a clean place to sleep, checking the availability of pillows and blankets, keeping in mind the spiritual requirements is also equally important in order to get rid of invisible negative entities around us. This article gives the sleeping tips about where one should not sleep and the spiritual science underlying it. 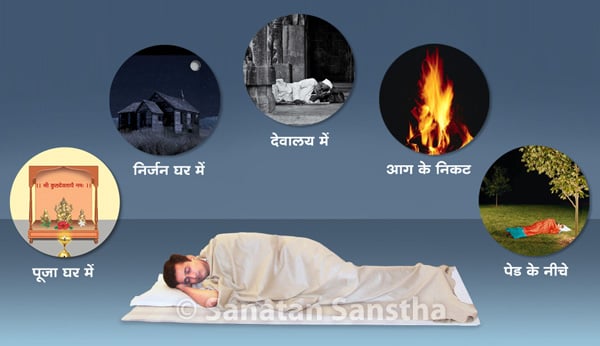 1. Sleeping tips : Do not sleep in the temple at home

Do not sleep directly in front of the Idol of the Deities.

The Shakti (Divine Energy) emanating from a Deity’s Idol is greater from the front side. The sattvikta of an average individual is less and hence, the individual finds it difficult to tolerate this Shakti. Therefore, such an individual can suffer from distress like heaviness of the head, increase in body-heat etc. Sleeping with the legs towards the Deity also amounts to insulting the Deity.

2. Sleeping tips : Do not sleep in an uninhabited house

3. Sleeping tips : Do not sleep in a temple

Since the atmosphere in a temple is sattvik,, the act of sleeping, which is rich in Tama component, is prohibited there.

4. Sleeping tips : Do not sleep near an ordinary fire

5. Sleeping tips : Do not sleep under the beam of the roof of a house

The beam of the roof of a house restricts the movement of waves which are rich in Raja component in the premises, thus reducing their pace. Since the rapidly moving waves in the vastu (premises) strike the beam with high speed, larger amount of heat is generated in the atmosphere around the beam. Sleeping or standing directly below the beam reduces the pace of functioning of the Panchaprana (Five vital energies) in the body of the individual. This reduces the efficiency of the individual. Therefore, sleeping or standing below the beam should be avoided.

6. Sleeping tips : Avoid touching or sleeping beneath a tree at night