Sleep is fundamentally a process that is predominant in Tama component; for, it is performed during the night time, which by itself is a period predominant in Tama component. Therefore it is of utmost importance to understand the spiritual science underlying various aspects related to peaceful sleep, such as the correct sleeping direction as prescribed by Hindu Dharma. If Sleeping position is wrong it can prove harmful, both, at physical as well as spiritual level, thus giving rise to insomnia, sleep disorders etc. Let us find out if sleeping direction towards the north-south direction is fruitful or detrimental.

1. Sleeping position : Reasons for not sleeping with the feet towards the south or in the north-south direction 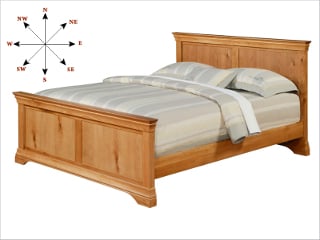 2. Spiritual experiences upon sleeping with the head in various directions, after commencing sādhanā (Spiritual practice)

Before commencing sādhanā, I was not particular about my head being in any particular direction while sleeping. I did not experience any distress then; however, just four months into sādhanā under the guidance of Sanatan Sanstha, and I had following experiences.

3. Sleeping position : Why should we not sit or sleep with our ankles crossed ?

Sitting or sleeping position with the ankles crossed enhances the proportion of functioning of Krukal Vāyu (A type of gas) present in the upa-prāṇas (Subordinate vital energies)within the body. In this state, the subtle-waves associated with the Āpa (Absolute Water) and Tēj (Absolute Fire) Principles activate Yama waves in the atmosphere, which then get attracted towards the individual through the toes. Due to the influence of Yama waves or the sheath created around its body, predominance of Raja particles in the mental sheath increases. Consequently, while asleep, the energy of the mind of the individual functions through the medium of dreams or while awake, in the form of hallucinations. Hence, while the individual is in this posture, proportion of getting dreams or experiencing hallucinations is high.