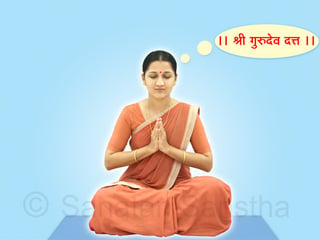 In this article the importance of chanting ‘Shri Gurudev Datta’ the Name of Deity Dattatreya in addition to performing the shradh rite for providing momentum for the onward journey of the departed ancestors and for protecting the self from distress is discussed.

2. How does chanting Deity Dattatreya’s Name

Majority of people in Kaliyug do not perform spiritual practice and hence, they are entrapped in Maya. As a result, their subtle-bodies remain dissatisfied after death. Such dissatisfied subtle-bodies get entrapped in the Martyalok (Region of the dead, situated between the earth and the Nether region). By chanting the Name of Deity Dattatreya, the ancestors entrapped in Martyalok gain momentum. Thereafter, depending on their karma they advance to progressively higher regions. Thus, automatically the trouble caused by them to their descendants on the earth reduces. Some people build the last resting place for their deceased family members in front of or beside their residence and regularly worship them with flowers. As a sign of affection and remembrance, their photographs are put up in the house. In some places, to commemorate the pitars it is a tradition to keep coins in the temple at home. All these acts entrap the subtle-bodies of the deceased family members in such places. Consequently, their spiritual sojourn is obstructed and they also have to undergo suffering. King Bhagirath performed severe austerities to liberate his ancestors, and brought Ganga onto the earth. This is an ideal example of repaying the debt unto ancestors. If we keep our ancestors entrapped in gross objects as mentioned above and do not chant etc. to provide them with momentum, we fail to repay the debt unto the pitars. In such cases, since they remain distressed, they create obstacles in our spiritual practice. To repay the debt unto our ancestors and to provide them with momentum, we should chant ‘Shri Gurudev Datta’ and perform shradh for them.

2 B. Creation of a protective sheath

Pitars who torment their descendants are known as ancestor distressing energies. When their pot of sins is full, Deity Dattatreya punishes them.

3. Chanting the Name of Deity Dattatreya

based on the severity of the problem of pitars

In the present times, almost everyone is afflicted with the problem of pitars; hence, each of us should chant ‘Shri Gurudev Datta’ everyday for at least 1 to 2 hours. If the distress is medium in nature, chant the Name for 2 to 4 hours and in case of severe distress, chant the Name for 4 to 6 hours.

4. Importance of chanting the

Name of Deity Dattatreya in the Pitrupaksha

Chanting the Name of Deity Dattatreya along with performing shradh in the Pitrupaksha further helps in protection from the distress due to the pitars. Hence, during the Pitrupaksha chant everyday for a minimum of 1 to 2 hours (12 to 24 malas) and try to chant continuously.

by chanting the Name of Deity Dattatreya

5 A. After chanting the Name of Deity Dattatreya,

I would see snakes in my dreams every day. It would frighten me; at times I would wake up with a start. Then, a seeker from Hindu Jana Jagruti Samiti and Sanatan Sanstha, Ms. Madhavi Acharya, told me to chant ‘Shri Gurudev Datta’. The day I began chanting this Name, the snakes disappeared from my dreams. Subsequently, on 2-3 occassions, I forgot to chant, and the snakes reappeared in my dreams. – A Seeker

(Snakes and serpents often represent the existence of the pitars. – Compiler)

5 B. When chanting the Name of Deity Dattatreya

with closed eyes, I felt as if many people were leaving

the house, and since then I have been chanting sincerely

When I commenced chanting ‘Om Shri Gurudev Datta’ after two days, I perceived with my closed eyes several people leaving the house. Thereafter, my headache subsided and the chest pain vanished. Since then, I have been chanting sincerely. – A Seeker

5 C. A dairy about to be closed re-started

when I began chanting the Name of Deity Dattatreya

My husband has been working for a dairy for several years. Over a few months, it had come to a state of closure since there was not much inflow of milk. This created tension at home. In the Pitrupaksha I began chanting ‘Shri Gurudev Datta’. Thereafter, all of a sudden, the dairy (in which there was not a drop of milk) received huge stocks of milk. Ever since I began this chanting, the atmosphere at home improved too. Before this incident, nearly everyone was saying that the dairy would close down; but the grace of Deity Dattatreya averted this danger. – A Seeker

5 D. My husband and I felt there was no need

to perform shradh for my deceased father-in-law since

On the day of the annual shradh of my father-in-law I felt that this year we need not perform the usual rites by offering of the pinḍa, since by Guru’s grace, he had reached a higher subtle-region. However, I kept this thought to myself. My praying and chanting of the Name of Deity Dattatreya continued sincerely. After lunch on that day, my husband said that he had felt the presence of his father for a few seconds and that he had a feeling that now it was not necessary to perform shradh for him. – A Seeker