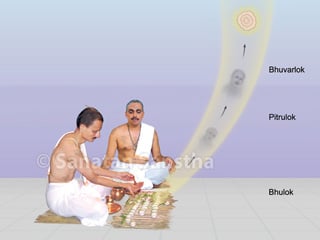 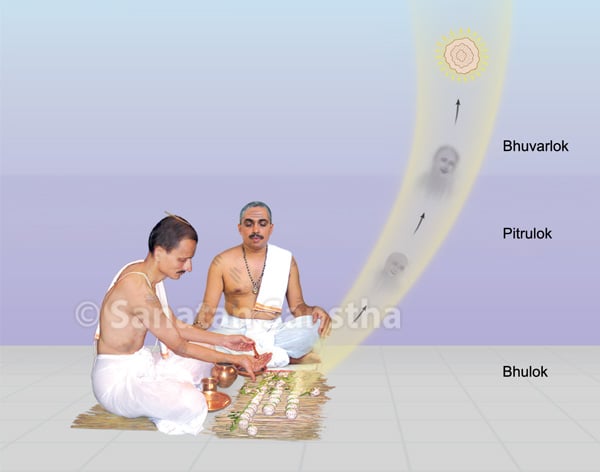 A. Helping through the medium of the Shradh rites, the pitars who have attained the Pitrulok (Region of the pitars), gain momentum for their onward journey.

B. Satisfying wishes and desires of the dead from our family lineage who, due to their unfulfilled desires have not gained momentum, meaning, who, instead of moving on to the superior regions are entrapped in the inferior region. Thus, providing momentum to their onward journey.

C. Due to their evil deeds, some pitars do not go to Pitrulok. Due to their karmas they enter the ghost species. To relieve them from that species, the Shradh rites are performed.

2. Need for performing Shradh and Importance of Shradh

A. Repaying the debt unto the pitars is as important as repaying the debt unto God, Sages and the society. It is the duty of the descendants to respect their ancestors, donate in their name and undertake activities that will please them. As per the scriptures, performing Shradh is a part of abiding by Dharma.

B. The pitars are satisfied only after receiving pinḍa and water from their sons. In this context, given ahead is a shloka in the Holy text Mahabharat that describes who qualifies to be called a ‘son’ –

Meaning : A son protects his pitars from the Hell named ‘Pun’; therefore, Deity Brahma Himself has called him ‘putra’. As per the above shloka, every son should perform rites like Shradh to enable his pitars to progress to higher subtle-regions, to relieve them from experiencing innumerable sufferings and so that from Pitrulok, they bestow their grace upon their descendants. It becomes amply clear that this is the duty of those who call themselves putra (Son).

Meaning : Never commit any mistake in tasks pertaining to Deities or pitars. Do not avoid them either.

D. Given ahead is a perceptive shloka from Shrimadbhagwadgita in context of the people who do not perform Shradh.

Meaning : Due to the non-performance of rites such as pinḍadan, Shradh, tarpana (Ritualistic offering water to the pitars) etc., the ancestors of such people (who do not perform Shradh) go to the Hell region. As a consequence, it prevents the emancipation of the descendants.

E. Sage Sumantu says, ‘श्राद्धात् परतरं नान्यत् श्रेयस्करमुदाहृतम् ।’, meaning, there is nothing more beneficial than a Shradh. Therefore, an individual who has power of discrimination should never ignore Shradh.

F. Brahmavaivartapurana says, ‘More important than Deity worship is the worship of pitars; hence, the rite of Nandi Shradh before commencement of any auspicious ceremony.’

G. Brahmapurana says, ‘He who performs the Shradh rites diligently and in accordance with his financial status, satisfies everyone right from Deity Brahma to the insignificant blade of grass. No one in the family of the individual performing the Shradh remains unhappy.’

2 I. Let us say, while alive an individual feels that Shradh is meaningless and that no one should perform Shradh for him after his death. However, after death, he realises that because of Shradh not being performed, he is entrapped; but he is unable to convey his feelings to anyone. This unfulfilled wish could make him unhappy. From this perspective, it is appropriate to perform Shradh for every deceased individual.

J. Performing Shradh settles the give-and-take account with an individual. For example, if we owe something to an individual and he dies before he is repaid. Then to repay that debt his/her Shradh should be performed.

K. In the present age, people neither perform rites like Shradh nor perform sadhana (Spiritual practice) the way they did in earlier times; therefore, most people suffer from distress due to the subtle-bodies of dissatisfied pitars. Only spiritually evolved individuals (Saints) can tell us whether pitars are causing distress to us or if the possibility of such distress exists. If it is not possible to seek guidance from a spiritually evolved individual, the problems mentioned ahead can be assumed to have been caused by pitars – regular conflicts in the family, not getting along with each another, unemployment, lack of savings, serious illness, inability to get married despite favourable conditions, marital discord, inability to conceive, repeated abortions, giving birth to a physically handicapped or a mentally retarded child and a family member getting addicted. Performing Shradh satisfies the pitars and in turn they bless their descendants. It also provides momentum to ancestors who are entrapped in the region of the dead. In effect, it eliminates the distress due to pitars.

L. When Shradh is performed on the tithi of demise of an individual, the food offered on that day nourishes the subtle-body of that individual for the whole year. So long as there are desires and expectations, the deceased individual expects food from his descendants on that particular day. By performing Shradh, not only are the desires of pitars fulfilled, but they also get energy for their onward journey. A single intense desire is sufficient to hamper the onward journey; for, the energy obtained from the Shradh is utilized to fulfil that desire. Hence, when Shradh is performed regularly, over a period, their desires diminish and they begin to acquire momemtum. Similarly, as per the rules laid down by the scriptures, it is only appropriate that so long as we are alive, as a token of gratitude towards our pitars, we perform their Shradh every year.

M. Reasons for performing anuual Shradh and Mahalaya Shradh for pitars despite knowing the fact that their spiritual level was 50%

A. The benefits obtained upon performing Shradh are mentioned in a shloka from Smrutichandrika, as given ahead –

B. If Shradh is performed during an eclipse, the performer obtains the fruit of having donated the earth.