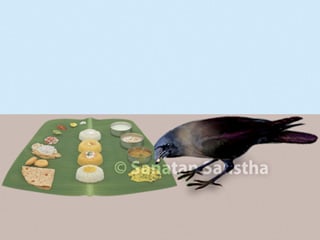 1. Who are the presiding deities of shradh ?

Pururav-Ardrav and Dhurilochan are Vishvedev (Group of Deities) of pitars. They are mentioned in the shradh rites. Shradh is associated with the presiding Deities Vasu, Rudra and Aditya of the pitars. The mantras recited and the rites performed during shradh helps establish contact with these Deities.

2. Is it acceptable to prepare favourite dishes of the deceased in the shradh meal ?

3. During the meals served to the Brahman during shradh, if the pitar-Brahman asks for a particular food item, should it be served ?

During the meal in the shradh, a prayer is made unto the Brahmans – ‘Of the food items which have been prepared, partake of whatever you wish’. In other words, if the Brahman asks for food items other than those served, there is no need to oblige. So also, as per the scriptures, since the Brahmans are supposed to eat in silence, there is no question of their asking for some other food item.

4. How does the food offered to pitars (Ancestors) reach them ?

A question posed in the Matsyapurana pertaining to shradh – How does the food consumed by the Brahmans or offered in the fire sacrifice reach the deceased souls after death, since they take rebirth and assume a new body ? The answer to this question is also given there. It reaches them through the Deities of pitars (namely, Vasu, Rudra and Aditya) or the food is transformed into other items such as Divine nectar, grass, pleasures, air, etc. and reach the pitars in different species.

Swadha is one of the two consorts of the Deity of fire. Her story is given ahead – The Almighty created food for pitars from the food items offered through tarpan in shradh. Despite this, the food and water offered by the people on earth was not delivered to the pitars. Hence, they surrendered unto Deity Brahma, who in turn created a beautiful woman, gave her the status of His daughter, named her ‘Swadha’ and handed her to the pitars. Then Deity Brahma commanded the human beings, “Offer whatever you want to, to the pitars, amidst chanting of Swadhant mantra”. Swadha is also referred to as “the wife of the pitars”i. It is stated that She should be worshipped with the mantra ‘ॐ र्‍हीं श्रीं क्लीं स्वधादेव्यै स्वाहा ।’ (Om rhim shrim klim Swadhadevyai swaha l)

The mystery behind the food and pinda of the shradh reaching the pitars through the medium of Brahmans during shradh lies in “चरोः प्राणभक्षं भक्षस्व ।”. It means, the pitars need to extract a portion of Pranashakti (Vital energy) from the pinda. Here, one needs to recollect how an elephant consumes a wood-apple and excretes it as it is. The mystery is in the process the kernel within the fruit iscompletely consumed. If this is possible, why is extraction of Pranashakti by the pitars from the pinda surprising ? Since the Deities and pitars exist at the subtle-plane (and are not gross), they do not consume the food offered to them, they only imbibe the fragrance from it.

5. How long does the food offered to pitars through the shradh suffice ?

6. What is done if for some reason it is not possible to prepare the shradh meal ?

7. How is a shradh ceremony performed during the shradhsampat (when more than one shradh falls on the same tithi) ?

8. Method of performing shradh ceremony on Avidhava navami (Shradh performed for a woman who dies before her husband does)

This shradh ceremony should be performed on the Navami (Ninth day) of the Pitrupaksha by her son or the husband. Death before her husband dies bestows her with the label of ‘avidhva (Not a vidhva [Widow]’). This shradh need not be performed after the death of her husband. In this shradh, a married woman is offered a meal and is gifted clothes and a coconut.

9. Matamaha shradh (Shradh of the maternal grandfather, performed by the son)

10 Can shradh ceremony be performed for those whose final rites have not been performed appropriately ?

Shradhs like Ekoddishṭa shradh cannot be performed for those whose final rites have not performed appropriately. Hence, if the entire body of the deceased is not traceable, at least his bones should be cremated, and even if these are not available, an image of the deceased should be made from darbha, cremated and then shradh rites should be performed as usual, and thereby, instate him/her in the category of pitars (meaning his/her name should be mentioned in the list of pitars in the future shradhs performed in the family). This is what the scriptures say. From this fact, it is obvious that the rite of cremation after death is the foundation of all other post-death rites. (Cremation is the first rite performed on the dead body. Rites like shradh performed for the subtle-body serially thereafter, are referred to as post-cremation rites.)

11. How is shradh ceremony for a renunciant performed ?

12. How is shradh for an yati (Ascetic) performed ?

Ekoddishṭa shradhs should not be performed for an Ascetic. Only a Parvana shradh should be performed on the eleventh post-death day, because if the Ascetic has taken the vows of command over the body, mind and speech represented by the tridanda, he does not assume the corpse state, but directly becomes a parvana, meaning, an ancestor.

13. What is the science underlying the act of a crow pecking at the pinda ?

14. What is the importance of sesame seeds in the pinda

Black sesame seeds are mixed in the pinda so that the crow pecks at it. Sesame seeds increase tiryak waves, meaning, the Raja-predominant waves. The crow gets attracted to these waves. This increases the possibility of a crow pecking at the pinda by 30%.

15. What is the reason for a crow not pecking at the pinda

If someone does not promise to fulfill the desire of the subtle-body, then due to the marak (Destroyer) waves emitted by the subtle-body of the pitars, even if the crow comes near the pinda it cannot peck at the pinda.

16. What are the alternatives adopted if the crow does not peck at the pinda ? 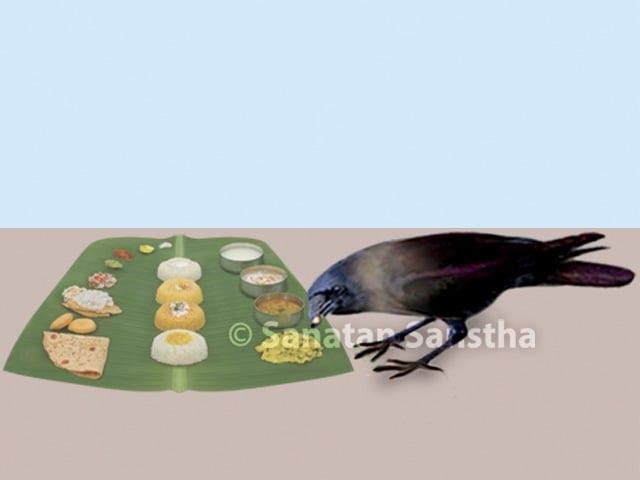 17. What happens to the Jiva after his death?

Hence, despite the gross body being destroyed by death, a Jiva’s existence and his desires do not end. Consequently, a Jiva gets entangled in his desires and this poses a hurdle in his further progress.

The process of an embodied soul (Jiva) getting entangled in his desires after death: After death a Jiva, that is, the subtle body constantly makes efforts for fulfilling its desires. Sometimes it enters another body forcibly. Due to desires a Jiva goes to various subtle regions (lokas) as per his actions. Despite going from one place to another, the Jiva has intense attachment to his previous place. Many a times while going from one place to another, this Jiva goes astray and keeps searching for something. The process of getting entangled in desires after death is known as hurdles in the further progress. Due to this, the responsibility of liberating the person from this process of getting entangled in desires rests with the deceased person’s family members.